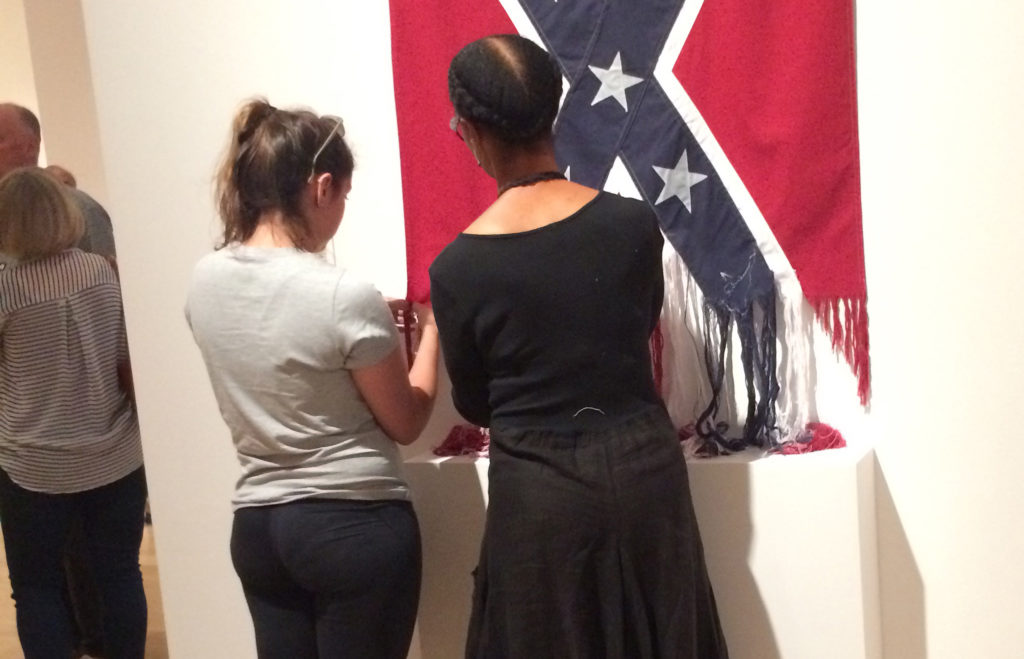 Sonya Clark (right) unraveled a Confederate flag at the Speed Museum and allowed patrons to help.

Thread by thread, Sonya Clark began to pull apart a Confederate flag over the weekend at the Speed Art Museum. And she had help, as one by one people took turns with her after waiting in a line that snaked through the museum.

It was part of “Unraveling,” her contribution to the museum’s exhibition “Southern Accent,” addressing issues around racism, privilege, Southern identity and Southern symbols. Clark, an African-American artist known for using a range of materials to focus on issues of race, culture and class, performed this piece as a part of the culminating events of the exhibition.

It’s incredibly thematically cogent, and the interactive nature allows a real dialogue, something that seems increasingly rare in the age of one sided Facebook rants, and vitriolic Twitter beefs.

“And the action of it is very slow and steady,” Clark said, “and it’s a way of thinking about the devastating history of our nation that is still our history, none the less.”

Clark said the snail’s pace of the work is something that can surprise people: “People say, ‘Oh, how long does it take you to undo the flag,’ and I say, ‘We don’t get any where near to undoing the flag.’ In like an hour, we maybe can get through about half an inch.”

When she performs “Unraveling,” each person gets about two minutes to sit with Clark, and pull at the cotton threads of the flag. It’s a wonderful extended metaphor, but Clark said the conversation is also incredibly important.

On Saturday, when I entered the third floor gallery where “Southern Accent” has lived for the past several months, there was a line that snaked around several corners, almost to the very beginning of the exhibition. “Unravelling” was being performed at the other end of the gallery.

The event was scheduled to last from 2 p.m. to 4 p.m., but the line didn’t shrink in the two hours I was there. People kept arriving.

Miranda Lash, co-curator of “Southern Accent,” talked about the turnout for the performance: “The number of people that came out today speaks to how prevalent the concern and emotions surrounding the issues of Southern symbols, and confederate flags.”

As people people walked past us, on their way out after having done their small part in the unravelling, Lash also talked about the success of the overall exhibition.

“Over 20,000 people have seen this exhibition for free,” she said. “That just counts admissions on Free Owsley Sundays. It’s been the highest-attended contemporary show in the Speed’s history.”

It was a big victory for the museum, one that shows a willingness to embrace tough topics.

But there were some in attendance Saturday who want to see the Speed do even more.

I spoke with a local poet and artist of color who goes by the name of Sparrow. He works at the Speed, and was keeping an eye on the line on Saturday.

“As an employee and someone who’s invested in what the Speed Art Museum can mean to Louisville, this particular exhibition for me has kind of shown that there is the capacity for the Speed to do service towards people of color,” Sparrow said. “Also to kind of open up room for dialogue that’s needed.”

Sparrow sees it as an important step, and he praised the Speed’s leadership — especially Lash — for taking that step. But he wants more.

“I believe the Speed has a lot of room to grow,” he continued. “I’ll say that as an employee, fearlessly. I believe that.”

In addition to Sparrow, there were a lot of artists and art students around. But, maybe, more important, were the attendees without direct ties to the art world.

“It’s basically about educating African-American students about what’s happening, and at our last meeting we were told that there were be an event happening at the Speed Art Museum,” Peter said. “So we came to show our support.”

She brought along her big sister Ruth, who is a student at UofL.

“I looked at this and thought, that’s pretty powerful — with the racial tension, and everything that’s going on, to be doing something like that is very important,” said the older Peter sister.

But not everyone at “Unraveling” felt strongly about the flag. Pamela Wiley, a poet and Louisville native, shared her feelings: “I don’t have any response to this Confederate flag. I don’t get that bent out of shape. Because, for me, it doesn’t mean anything. It isn’t symbolic to me.”

Divergent feelings about what the flag symbolizes is deep in the heart of the debate surrounding the flag, as well as the many Confederate monuments that have come under fire.

“I think it’s fair to say, ‘It means this to me, because of my background, because of my family,’” said Lash. “But there are also larger political implications, and when I say political I mean, for example, historical documents by the president and the vice president of the Confederacy, who said in no uncertain terms that one of the purposes of succeeding was to preserve the institution of slavery.”

As a bystander, I frequently found myself watching Clark working with people to unravel the flag. Her hands were fast, dexterous. The cotton flag has an incredibly tight weave, and Clark’s hand moved with a familiarity, an economy of movement that had its own beauty.

Of course, the participants who stood with Clark where much less practiced. Clark didn’t seem to mind. You could see her pointing, offering suggestions and occasionally picking out a single thread to give to give to the person next to her.

Clark’s manner was friendly and open. There’s nothing confrontative in her manner or demeanor. She’s just spending a little bit of time with each person who comes through.

But the people like me, who are just watching, have to guess at what’s being said.

“People ask me, ‘what’s the most interesting thing that people say,’ and I tend not to reveal that because there’s something very… like, I don’t wanna be mic’d, I want it to be one-on-one,” Clark said. “One way of undoing many of the injustices in this nation is a one-on-one relationship.”

Still, I was curious about those conversations. Especially when Mayor Greg Fischer showed up, just a few minutes before 4 p.m. — the performance’s originally scheduled ending.

If there is any single person in Louisville who has the power to pull at the injustice in our city that the threads of the flag represent, it’s him.

He gave the LEO a brief statement after his participation, in which he made some pretty unequivocal points:

“We’ve been leading a lot of discussion around the city around racism and slavery, particularly post-Charlottesville. And it’s been interesting to me how little people actual know about the history of the time. I don’t think anybody  should mistake what the Civil War was all about — the buying, selling and breeding of people to build an economy on.”

I ended up not going through the line. The event was supposed to run from 2 p.m.-4 p.m., but at 4 p.m. the line showed no signs of shortening. I couldn’t stay any longer, but I’m told by my contact at the museum that the line kept drawing in new participants until the Speed’s normal Saturday closing at 5 p.m. But even after the doors were shut, Clark stayed until every person had gone through, finally leaving around 6 p.m.

As an arts writer, I get to have a lot of incredible conversations, and while I didn’t get to unravel the flag, my conversation with Clark over the phone offered me insight into the way I speak and think about racial tension.

“I don’t know who you mean by ‘we.’ I’m not being coy. I really think that’s a question to dig into,” she said.

I had asked her a question about how our national dialogue has changed in the last several years, and how “we” might move forward now that we’re aware of the scope of police brutality and other injustices that the African American population face.

And she very gently questioned that “we.”

“So I don’t know who you mean by ‘we,’ but the consciousness of people who have the privilege to think or not think about these things… whether that’s the ‘we’ that you’re referring to, that can ebb and flow and that is a privileged state.”

And those are the kinds of moments and conversations Clark wants her piece to create.

“So, just now, what happened between us, a little thread got unravelled,” said Clark. “And you’re not a bad person. Privilege is blinding.”

But that moment, she says, can lead to change: