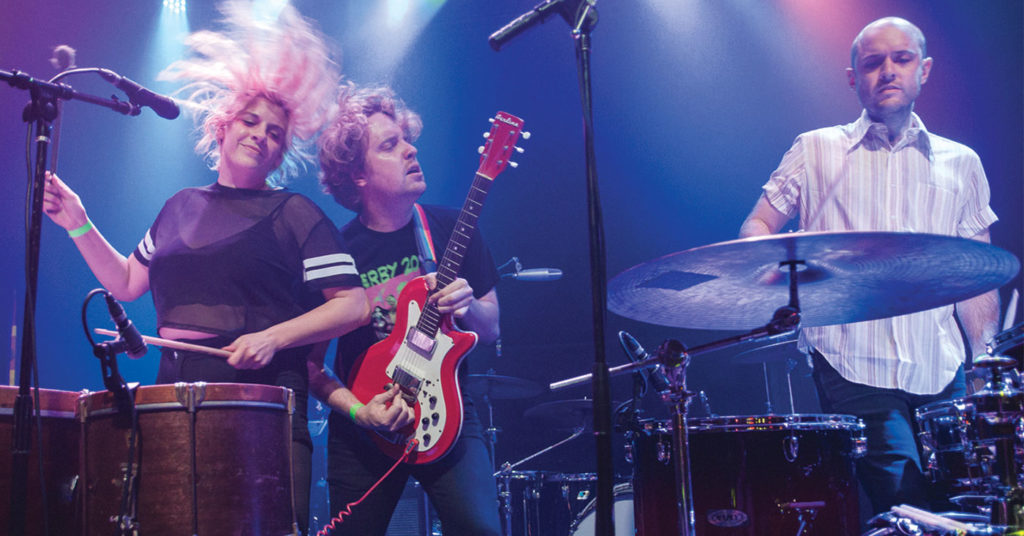 [Editor’s Note: Sonic Breakdown is a column that deconstructs a single song from a Louisville band.]

Brenda likes to open their shows with “DRDR.” The song’s sparse intro clicks like a heartbeat, and is followed by a dark, unassuming new-wave bass line that unexpectedly descends into a manic, grab-you-by-the-throat-and-squeeze whiplash pulse. It’s a modern mixture of punk aesthetics and early-‘90s grunge — a formula that many bands seek, while Brenda keeps the secret tucked safely away in the back pocket of an old pair of dirty jeans.

Psuedo-science and old tales are at the heart of “DRDR,” Brenda guitarist and vocalist Mat Horne told me. “The idea for the song was my great-aunt,” he said. “She has all these strange, homeopathic remedies, and the one that stuck out to me when I was a kid was that she kept a bar of Irish Spring at the bottom of her bed. She said it helped with her arthritis.”

And it doesn’t end there. Looking for further material to mine, he asked his great-aunt for any other folklore health advice. “I called her and asked her if she had any other weird things that she did and she said yeah: if you burn yourself put some butter on it; if you have a sty rub a golden ring on it.” One person’s strange ways is another person’s pop song. But the song also touches on universal themes and struggles. “I guess the song itself is trying to come up with any way to feel better through medicine, money, religion — reaching out for some kind of resolution,” Horne ultimately revealed.

“DRDR” originally was a folk song, because Horne had been listening to and thereby influenced by Gillian Welch, particularly her 2011 album The Harrow & The Harvest. Listening to “DRDR” in its current grease-grimed format, one would be hard pressed to imagine it any other way, especially with a folk vibe. “The song was written maybe as some kind of response to The Harrow & The Havest,” Horne said. “It has a lot of that country imagery, so I took that and I was thinking about my own upbringing in the country.”

According to Horne, “DRDR” showcases one of his favorite guitar solos: “A lot of the time people overdub their guitar solos and shit like that to try and get it, but I just like to go balls to the wall and roll around the floor with the band.” And listening to “DRDR,” along with the rest of  Brenda’s latest release (2016’s Night School), it’s easy to see that unhinged guitar solo as a microcosm of Brenda’s sound at large — raw, biting and captivating.

‘DRDR’ is from Brenda’s 2016 album Nightschool.