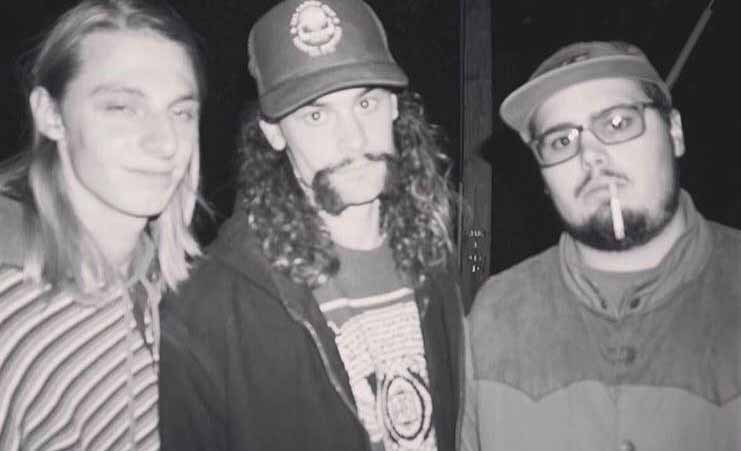 Boa has been writing music and playing live for more than a year now, but decided to take their time with their debut release, No Bad Days, a seven-song EP that comes out this weekend. A three-piece, psychedelic-leaning rock band that broke off from a five-piece, prog-style rock group after two of the members went to college, Boa has worked to keep a big, full sound through every member taking on vocal duties, and narrowing in on sweeping hooks. Before their release party at Zanzabar this weekend, we caught up with Shane Spader and Logan Hopkins to talk about why they waited a year to release a record, why they took a shot at Donald Trump and how they worked to make a three-piece sound as dense as possible.

On why they waited for more than a year to release music.
Logan Hopkins: We’ve had songs all through the last year. With the old band, we’d write songs and send them straight to the studio and record them. And, a few months down the line, we’d be playing them differently, with better ideas, so I think that was one thing that we really learned, and we wanted to make sure that we could put this record out, and in a year’s time still be really happy with the way it turned out.

On how they worked to make these songs focused and concise, despite having psych-rock and jam-band sensibilities.
Shane Spader: We were used to writing really progressive stuff, and I think that we just wanted to hone in on writing something that people can grasp onto a little more than having the listener at one spot at the beginning of the song, then another spot, then another spot, taking them all over the place. We wanted to make it a little more easy for a listener to listen to.

LH: Since there’s only three of us now, we have to play parts that are constantly going, we have to feed off each other a lot more — I just can’t go off on tangents and breakdowns. It has to be pretty organized in a way, so we don’t end up sounding empty as a three piece. Maybe that’s even part of it, too — a coping mechanism to not make ourselves sound empty.

On how ‘No Bad Days’ takes a shot at Donald Trump.
SS: The way we write music is just through whatever is happening in our lives, so I wouldn’t say that political is something that we are going for at all, but it was just something that was happening at the time that we felt, ‘Yeah, this is kind of fucked up.’

LH: A lot of songs are about drug addiction. There’s a lot of about real-life problems, and some good things, too.

On the challenges of adjusting the songs for the studio.
LH: Live, you have that really loud aspect of things, so it sounds really full. In the studio, we messed around — I probably played my guitar through three to five different amps and overlaid tracks — to try to get different sound. It still sounds the same way I would play live, but I think it gave the record a little bit more depth. Kind of the same thing for vocals as well. We had our clean track vocals that we all did, and then we would do another track really low. I would actually use my guitar pedals through the microphone and put an effect track down below, just to kind of add more depth.

SS: Recording vocals brought to our attention that some of our parts may have not sounded the best. We actually switched a couple of vocal parts while in the studio. I think that practicing in a basement, we couldn’t hear exactly what we were doing. We thought it sounded alright, but then we went to the studio and thought, ‘We should probably change this up a little bit, because it will sound better.’

On why they released an EP instead of a full-length.
SS: All the songs that made it on here are about all the songs that we have fully written, but also we just wanted to give people, ‘This is who we are. Here’s seven songs, and this what we are kind of about.’