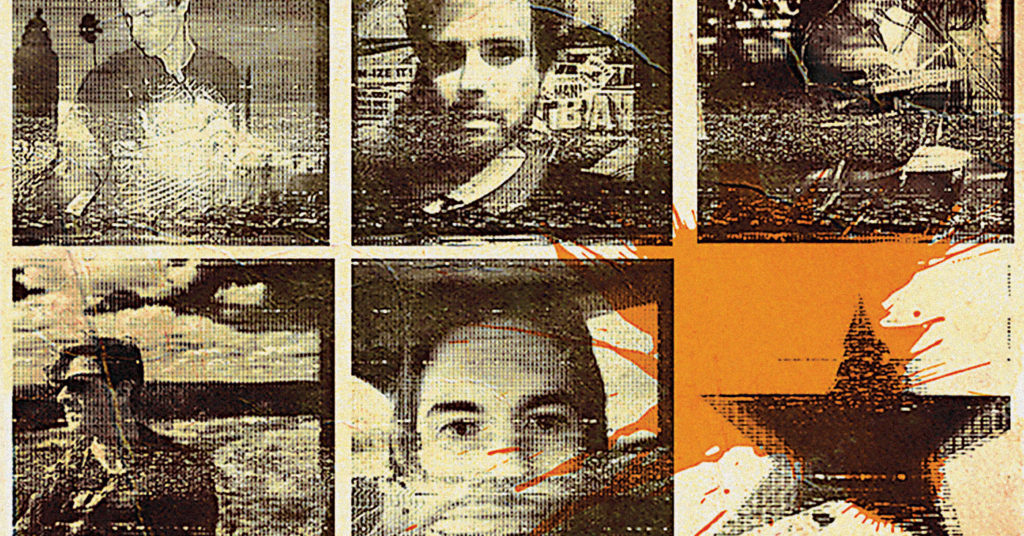 Cheree will perform a tribute to Suicide

The infamous CBGB venue, opened in 1973 by Hilly Kristal in the East Village of New York, was widely regarded as a catalyst for the 1970s New York punk scene. A group of Louisville musicians, including William Benton (Cat Casual), Jonathan Kamer and Billy Bissig (Total Void), Jake Philley (Cereal Glyphs), Andrew Sellers (Andrew Rhinehart) and Michael Powell (Vectortone Productions) will be performing as legendary bands, most of which are associated with CBGB, for a night of Halloween cover sets. We asked them why they chose these particular bands.

William Benton
Performing in Idiot Box, a tribute to Television
Television is pretty much the New York punk band for me, Both [Tom] Verlaine and [Richard] Lloyd’s guitars were instrumental in my musical education. Television helped me to fall in love with playing the guitar. I really love Verlaine’s lyrics and songwriting. That earliest crop of New York punk — Ramones, Television, Patti Smith, Suicide, Talking Heads, The Voidoids — and on and on — had such a variety of sounds and talents. If only punk rock could have been that diverse from then on. I grew up sheltered and naive and thought that all scenes were like that — then I went out into the world and was subjected to mostly antiseptic personalities of rich kids with top-dollar gear, all trying to sound like a fad and each other. It was a time and a place that was an open canvas. And it was well used. And then there was no-wave… but that’s a whole other Halloween show.

Jonathan Kamer and Billy Bissig
Performing in Sleeveless In Seattle, a tribute to Nirvana
Kamer: CBGB’s hosted what was a catalyst in punk-rock and hardcore music. So many influential bands came out of that era and space. Billy [Bissig], Nick [Bissig], and Eric [McManus] have done Nirvana cover sets in the past and wanted to do it this year for Halloween. It’s usually all members of Trophy Wives, but I guess since I’m now playing in Total Void with Billy and Nick, it just made sense for me to play with them in the Nirvana band.

Bissig: We all listened to them when we were young, and I hope we can do them justice at the show. I learned how to play guitar from listening to Nirvana, they made it seem like anyone could do it, like a lot of post-punk bands did, I just really liked their music — very simple and catchy without being cheesy. They do a lot of vocal harmonies that I’m a sucker for, and it makes it fun to sing with my brother.

Jake Philley
Performing in Trouble Boys, a tribute to The Replacements
I love Halloween cover bands and wanted to do one that was easy enough that we could bang it out in a few practices. I love the Replacements, and they have the added bonus of being notoriously sloppy live, so if we mess things up, it will still probably be better than some of their performances. Lastly, my girlfriend and I have an anniversary coming up this month, and The Replacements is her favorite band.

Andrew Sellers and Michael Powell
Performing in Cheree, a tribute to Suicide
Sellers: Suicide was more of a weird, cerebral, performance art project than a band really, and that seemed intriguing to take on in terms of doing a cover/tribute type thing. I just feel like the whole downtown scene at that time seems magically epic. People like La Monte Young and Lou Reed and Philip Glass and Laurie Anderson and John Lurie and Fab Five Freddy and John Cale and David Byrne and Debbie Harry and Tom Verlaine, et cetera, all mixing together. It just seems like that was one of the coolest and most creatively fruitful and influential artistic gene pool cross-pollinations ever.

Powell: CBGB was the epicenter of the American punk movement that begat everything that happened after that. Alternative and indie rock of the ‘80s and ‘90s owes so much to what Television, Patti Smith, Blondie and Richard Hell were doing. And while it was an incubator for the NYC punk scene, it also was the destination for all the great bands of that era from across the country — Devo, The B52s, The Replacements, of course, many others. I love Suicide, and they’re spooky in that David Lynch sort of way — that warped view of ‘50s Americana fractured through a Eraserhead/Blue Velvet dark prism and this punk-damaged manic rockabilly with an oppressive industrial drum machine. It’s pretty perfect for Halloween.