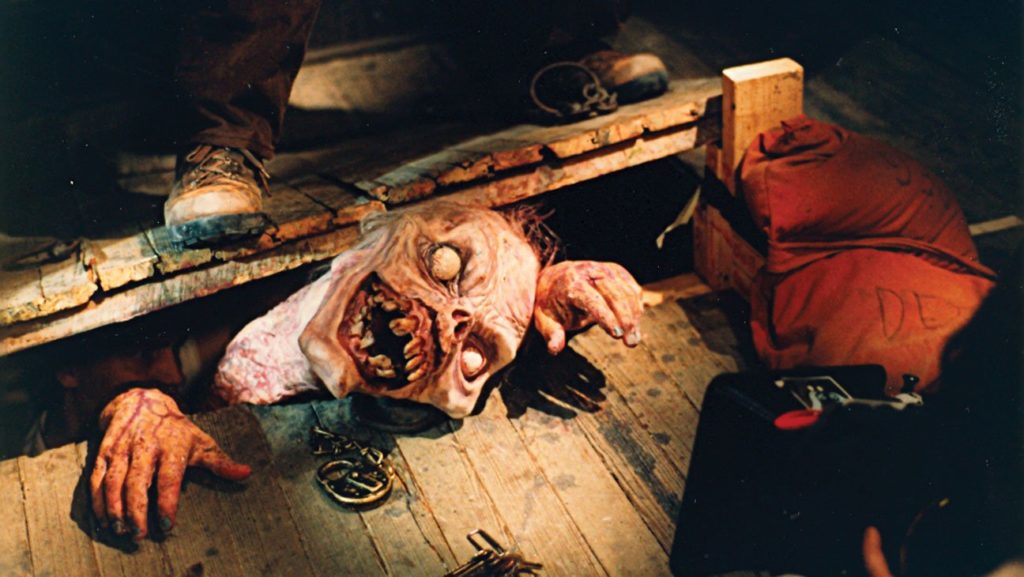 Still from the film "Evil Dead 2."

Run and Recover
Great Flood Brewing Company
Free  |  Run at 6:30 p.m.; 7:30 p.m.
To help all you runners out there who feel a little tight after a run, The Derby City Run Club is hosting a run and yoga session for all levels. The run will begin at Great Flood Brewing Company at 6:30 p.m. and will be followed by a yoga class at 7:30 p.m. And after all that, be sure to grab a few brews with your newfound running/yogi buddies.

Taco and Movie Monday: ‘Nightmare on Elm Street’
OId Louisville Brewery
$6  |  7 p.m.
Old Louisville Brewery is continuing its celebration of Halloween cinema with the screening of another horror classic: “Nightmare on Elm Street.” In between screams of terror, enjoy a beer and taco special for $6, or three tacos for $6, or maybe splurge a little on beef or chicken tacos, empanadas or a quesadilla, all provided by Sabor Latino. Movie starts at 7 p.m. —LEO

Church-State Separation with John Yarmuth
Free  |  6:30-8 p.m.
The line between our government and religious governance is being blurred… actually, downright broken in some instances. This public forum, hosted by the Louisville chapter of Americans United for Separation of Church and State, includes Rep. John Yarmuth and congressional candidate and civil rights attorney Dan Canon. While tickets have already sold out, and you can no longer attend the event in person, you can still watch a Facebook Live feed on Americans United Louisville’s Facebook page. —Aaron Yarmuth

Transparent: Trans Visibility
Speed Cinema
Free (first come, first served)  |  6-9 p.m.
Zackary Drucker, multimedia artist and producer of “Transparent,” will be in town to screen an episode of the show and host a conversation about “the challenges, promise and advances of transgender visibility in contemporary media.” As a successful producer and a trans woman, Drucker has a unique perspective on breaking down “the role of transgender artists on both sides of the camera.” —LEO

Copper & Kings + Michter’s Present: The MixT&pe at Meta
Meta
Free  |  8 p.m.
Meta’s own Jeremy Johnson and Amy Fisher will be “mixing up cocktails inspired by and created specifically to match the music of the evening — beats by the revolutionary hip-hop collective, Wu-Tang Clan.” And like the immortal music of the Wu-Tang Clan, “these cocktails Ain’t Nuthing ta F’ Wit.” —Ethan Smith

Undercover in North Korea with Suki Kim
Louisville Free Public Library
Free  |  6:30-8 p.m.
Journalist and bestselling-author Suki Kim lived undercover in North Korea, teaching English to 19-year-old sons of the country’s ruling class. Her experiences gave her a unique perspective, which she has written about. It’s the world’s most oppressive regime, and you can hear all about it from Kim at the Louisville Free Public Library. —Aaron Yarmuth

Horror Movies in the Courtyard: ‘Evil Dead 2’
Copper & Kings
Free  |  8:30 p.m.
Join Copper & Kings as it descends into madness with a screening of “Evil Dead 2” on a large, outdoor screen. Everyone is encouraged to bring a chair or blanket, and brandy cocktails and snacks will be available, but no pets are allowed. In the event of rain, the film will be shown inside the distillery. —LEO

Dying in the Streets: Spoken Word and Poetry
Heine Brothers’ Coffee (Schnitzelburg)
Free  |  8 p.m.
Join some of the finest poets and spoken word artists in Louisville as they bring “testimony to death on the margins.” The show is a part of the Before I Die Festival, a monthlong program “exploring the many different ways we can face death and dying.” Performing artists include Ron Whitehead, Lana Highfill, Brandon ‘B Shatter’ Harrison, Jinn Bug and Brianna Harlan. —LEO