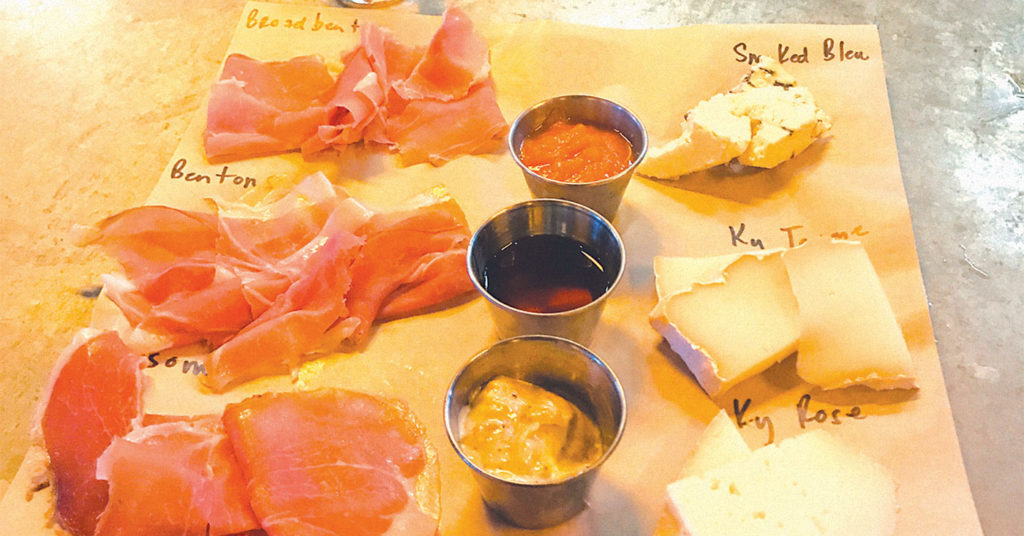 Garage Bar's Ham Tasting plate; from top to bottom, the hams are Broadbent, Benton's and col Newsom's. The cheeses, from top to bottom, are Mimi's smoked bleu, Old Kentucky Tomme and Kenny's Kentucky Rose. And the pairing is a pour of Peerless RyePhoto by Steven Cavanaugh

Italian prosciutto, Spanish Serrano and German Westphalian are among the great cured hams of Western Civilization. Every bit as worthy of gourmet attention is American country ham. Cured with salt, brown sugar, and sometimes a bit of pepper or other custom seasonings, they are hung over smoldering hickory wood for several months, shrinking in the process, so that the meat is lean and chewy. The resulting ham is a work of art — salty, sometimes a bit sweet, and demonstrating varying degrees of smokiness, sometimes even tanginess.

Before the 1920s, when Hormel started preparing hams by injecting them with salt water, what we now call “country ham” was the de facto American style. No more. Comparatively bland water-injected baked ham has taken over as the norm.

Happily for those of us in the Bluegrass State, Kentucky producers figure prominently in the great American Country Ham Belt, which includes Virginia, West Virginia, Tennessee and parts of Georgia, too. Therefore, we have access to ham with modest country roots, but worthy of royalty. Case in point — One of the most devoted aficionados of the famous Smithfield cured hams of Virginia was Queen Victoria, who was said to have had half a dozen shipped to her each week. (One assumes she didn’t eat them all herself.) During her reign, the pigs fated for the royal table — as well as domestic ones — were raised on a diet of peanuts, acorns and hickory nuts. Today, alas, they are grain fed like most American hogs. But Smithfield is still a major player in pork.

Warning: If you want to enjoy country ham at home, do not buy the slices in vacuum-sealed plastic packages. They tend to be rubbery. The best source in town is the small local chain of Paul’s Fruit Markets.

The Paul’s deli counter staff will slice it thinly for you in any quantity you want. Even better, you can pick up a package of authentic beaten biscuits on which to serve your smoky, salty meat.

Tip: Warm the hard biscuits in the oven for a few minutes so they will easily pry apart. They will also soften just enough to be easy to bite. Know too, that the store sells house-made country ham salad (ground ham mixed with mayonnaise and just the right amount of pickle relish), which is especially savory on beaten biscuits.

If you are not ready to make that much commitment to country ham, head to the Garage Bar on Market Street. The menu has a Ham Tasting featuring two from western Kentucky (Col. Newsom’s and Broadbent’s) and one from eastern Tennessee (Benton’s). The portions are served sliced as thinly as prosciutto.

You can choose one, two or all three. I recommend trying them all. And with them, you should drink bourbon. The Garage Bar has an excellent list which includes many private single barrel selections from its affiliate, 21c Museum Hotel.

It was the 21c private selection single barrel of Old Forester from 2016 that I paired with my recent order of the ham trio. It had a subtle smokiness to it, along with characteristic Old Forester fruit that was a wonderful partner with the ham. (Sip it neat, or ask for a single ice cube.)

The ham is served with Blue Dog Bakery baguettes with sides of red eye aioli and a carrot puree. I highly recommend a smidge of both the aioli (which contains a touch of espresso in a nod to traditional red-eye gravy made with ham drippings and coffee) and the sweet carrot puree (who would have thought?) to spread on the Benton’s Smoky Mountain Ham from Madisonville. It was the saltiest (though not unpleasantly so) of the three. The spreads are entirely optional for the other two.

Broadbent Country Ham comes from Kuttawa and you may have heard of it because it has been the grand champion prize ham at the Kentucky State Fair more often than any other.  The winning hams are auctioned for charity and have fetched upwards of $1 million. (No fear. The portion here, like that of the other two, costs $5.) It is a mild-flavored example of country ham, with a delicate sweet ribbon of bright, white fat. Yes, go ahead. Eat the fat. The bourbon will cut right through it.

Then there is Col. Newsom’s Aged Country Ham from Princeton. It became known nationally because famed chef James Beard praised it and rightly so. Traditionally aged with the seasons (like most bourbon) rather than in climate-controlled warehouses, I find that it strikes a wonderful balance between smoky saltiness and a fine, sweet tanginess.

Fascinatingly, it is the only American ham chosen to hang in Aracena, Spain’s Museo del Jamón (Yes, that is “Museum of Ham.”) with the finest hams of Italy, Spain, and Germany.