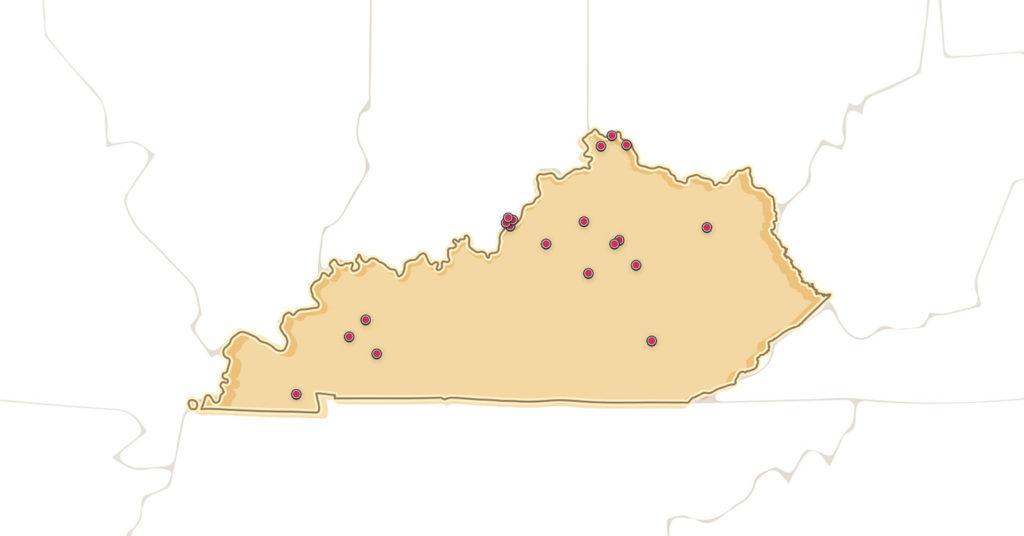 [Editor’s Note: This story is part of a package on local hate groups, which also includes articles about one white nationalist’s strategy and a resister’s warning. Also, we at LEO expected that publishing a package of stories on hate groups might generate controversy, so we talked with an ethicist from the Poynter Institute for his take. To read the full Editor’s Note, go here.]

Within hours of the deadly white supremacist rally in Charlottesville, the national media descended on the small northern Kentucky city of Florence, where alleged murderer James Alex Fields grew up.

This was not the first time a national spotlight shone on Kentucky in the wake of racially-motivated violence.

Hate groups have long called Kentucky and the region home — from the days when white supremacists influenced state and local government, to 11 years ago, when Ku Klux Klan members beat a young man nearly to death at a county fair, to today.

“For white supremacists, they view (Kentucky and) Appalachia, wrongly, as a place where there are white folks who are very independent, don’t like the government and who are sympathetic to their messages,” said Heidi Beirich, director of the Intelligence Project at the Southern Poverty Law Center.

The SPLC, a national legal advocacy group that tracks extremist movements, has publicly identified 23 active hate groups in Kentucky. The Commonwealth, the 26th largest state in the country, ranks 14th in the number of hate groups. Many of Kentucky’s neighbors — Tennessee, Indiana and Ohio — rank even higher on the list.

“There are major players in and near Kentucky, so it’s on our radar,” Beirich said. “We pay very close attention to Appalachia and the broader region. That area, along with the Deep South, is most susceptible to hate group activity.”

Experts say there’s no one reason, but rather, a handful of factors — from lack of diversity to location to the state’s history.

In 2006, Klansmen showed up to the Meade County Fair, hoping to draft new members. At the time, the Imperial Klans of America was among the largest chapters in the U.S. Their leader, Ron Edwards, wanted to expand.

The group saw a 16-year-old boy who looked Hispanic. They wrongly assumed he was in the country illegally and beat him nearly to death.

SPLC sued IKA and Edwards and won a $2.5 million settlement on behalf of the victim, Jordan Gruver.

IKA was headquartered in Dawson Springs, a former health resort town of 2,700 in Western Kentucky. On its website, the group said it was based there because, “Our race has always lived better off in smaller towns, and only a return back to the rural farming culture will save America.”

Beirich, of the SPLC, said some hate groups gravitate toward rural areas in this region.

“It is a place where you can get into a small town and have high levels of privacy,” Beirich said. “Parts of the region are relatively isolated and that works to a lot of these groups’ benefit.”

The KKK had four active chapters in Kentucky in 2017, according to the SPLC.

“Outside of Louisville, and Lexington to some degree, Kentucky is not a very welcoming place to minorities,” said Ricky L. Jones, chair of the Pan-African Studies department at UofL..

That’s not just his opinion — a WalletHub study found that Kentucky is among the least diverse states in the nation, and has been for the last seven years.

West Virginia, Tennessee and Indiana all have their fair share of hate group history. The original KKK was founded in Pulaski, Tennessee, in 1865.

The National Alliance, which SPLC once called “the most dangerous and best organized neo-Nazi formation in America,” was based in Hillsboro, West Virginia, population 247.

In Indiana, going back to the 1920s, the KKK was extremely active, all the way up to the governor’s mansion. According to historians, KKK Grand Dragon D.C. Stephenson helped Klansmen get elected to offices on the municipal, county and state levels, including Governor Ed Jackson.

Today, Southern Indiana is home to the Traditionalist Worker Party, led by Matthew Heimbach. This white nationalist group, based in the small town of Paoli, has just a few hundred members but is being closely watched by the SPLC and the Anti-Defamation League. Heimbach helped organize the Unite the Right rally in Charlottesville, where dozens were injured and one killed amid violent clashes.

He also pleaded guilty to shoving an African-American protester at a March 2016 Trump rally in Louisville.

Hate Crimes On The Rise

Nationally, there’s been a spike in hate crimes since the 2016 election. Many of Kentucky’s recent, high-profile incidents have occurred at colleges and universities.

At UK, a Muslim woman reportedly had her hijab ripped off her head and a Hispanic student was pepper-sprayed, according to the Lexington Herald-Leader. Campus police investigated both incidents.

Last September, someone keyed a racial slur into an African-American student’s car at Western Kentucky University. Separately, an assistant dean received a racist note. WKU President Gary Ransdell promised to increase inclusion and diversity efforts on campus in response, according to the Bowling Green Daily News.

And at Northern Kentucky University, signs advertising “Welcome White Week” were hung around campus last fall. Buzzfeed reported that the university promised to investigate, and students organized a protest of the signs and the group that posted them.

For those who track hate groups, these incidents bear just as much watching as the activity of more formalized organizations.

“I don’t think that white supremacy is ever going to be a seriously formidable force politically,” said Beirich, of the SPLC. “What I’m mostly worried about nowadays is domestic terrorism and hate crimes happening to people who are demeaned by hate groups.” •