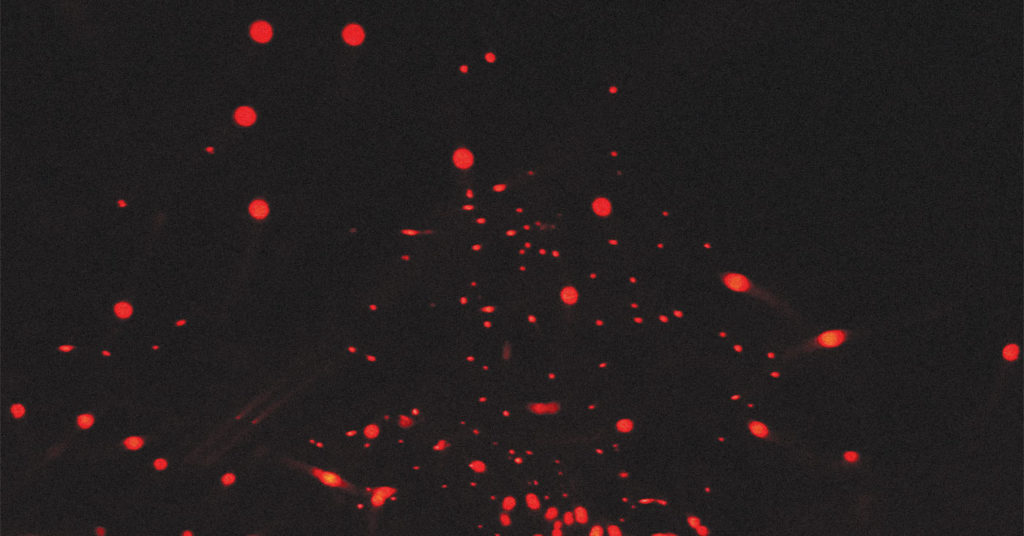 Images from a 'Synapse" video installation

Artist Annie Mitchell of the Oh Wow collective says that all of her art throughout her life has tried to instill some sense of peace, of calmness.

When she started, she didn’t know that a lot of her work was similar to what science — brainwave science — would eventually teach us about purposefully putting ourselves into a state that’s normally associated with sleeping.

This Saturday, Mitchell and other Oh Wow members will use light and sound to try to encourage an audience to experience delta waves without sleeping, when Oh Wow offers the installation “Synapse” for one night only.

LEO spoke with Mitchell, and MaryLiz Bender of the band Twin Limb, who helped create the ambient soundscape for “Synapse.”

But first, some info on neural oscillation, better known as brainwaves.

For years now, scientists have been able to measure and study the recurring, rhythmic neural activity in your brain. This activity moves like a wave, when measured and recorded with electroencephalography

Scientists noticed patterns in the brainwaves, and named them after the Greek alphabet.

Different brainwaves happen when the brain is doing different things, and that’s where the science gets interesting. Some brainwaves are found during happiness, or sadness or periods of intense focus, while other brainwaves — the delta waves — are found while people sleep.

It’s these delta waves that Mitchell and Oh Wow are interested in, the waves that induce that calm state Mitchell has been searching for in her art.

In conversation, Mitchell admitted to being a wild child, and having had a hard time focusing growing up Henry County. She didn’t care much for her school.

“It never worked for me. I never felt like I fit in, and I guess that’s why I took off,” said Mitchell.

She became an emancipated minor at 14 and wandered up and down the East Coast before finishing high school and heading off to college to major in computer science and art.

She ended up dropping out and working with computers for a couple decades, first as a graphic designer, but eventually in experience design.

“I decided I didn’t want to work for anyone anymore, and do this art thing. Sort of see where it took me, and how long I could last with that as my primary focus,” she said.

She knew she wanted to work in light design and large-scale public art, and so she spent some time studying and backpacking in Europe.

The initial inspiration for “Synapse” dates back to Mitchell’s time in Europe.

At the time she was a personal chef for an ultra-marathon runner, and was tasked with having food ready for the runner, who was running for several days and nights.

While prepping some food on Mont Blanc in France, she noticed strange lights, bobbing and moving in the distance. They were hypnotic and beautiful. She eventually realized it was the headlamps of the runners, seen from a great distance. But the image stayed with her. “For a moment it was magic, the most beautify and surreal thing I’ve ever seen in my life. It was unforgettable, unshakable. I could not get this picture out of my head.”

She knew she had to recreate that moment.

After moving back to Kentucky to care for her ailing mother, Mitchell began to meet, or get reacquainted, with the people with whom she formed Oh Wow.

The group is made up of artists and scientists, and includes Mitchell, composer and artist W.G. Rickel, aspiring astrophysicist Becky Steele and musician MaryLiz Bender.

Oh Wow has its hands in a lot of interesting projects, including partnerships with Space Tango and Kris Kimel of IdeaFestival.

Those partnerships also helped lead to the creation of “Synapse.” While it functions as a piece of art, “Synapse” is also meant to work as a tool to help think. That tool was designed to be used by members of a think tank created by Space Tango. That think tank helped generate ideas for research on the space international station.

Now, you won’t be in communication with the space station Saturday night, but Mitchell wants the experience to affect its audience in a way similar to its intended use with members of the think tank: She wants it to bring people together, so they can think great thoughts.

The aim of the evening is to come up with ideas to propel humanity into a greater tomorrow. It’s hard to know exactly what the experience will be like, but Bender talked about how she felt while recording vocals for the ambient music Rickel had composed.

“The way that it ended up feeling was very different than composing music with Twin Limb,” said Bender, adding, “I wasn’t really thinking of anything. I was worried about what people would think of this thing, I considered it to be very temporary, which is a very beautiful lesson.”

Audience members will be lying on the floor and are encouraged to bring blankets.