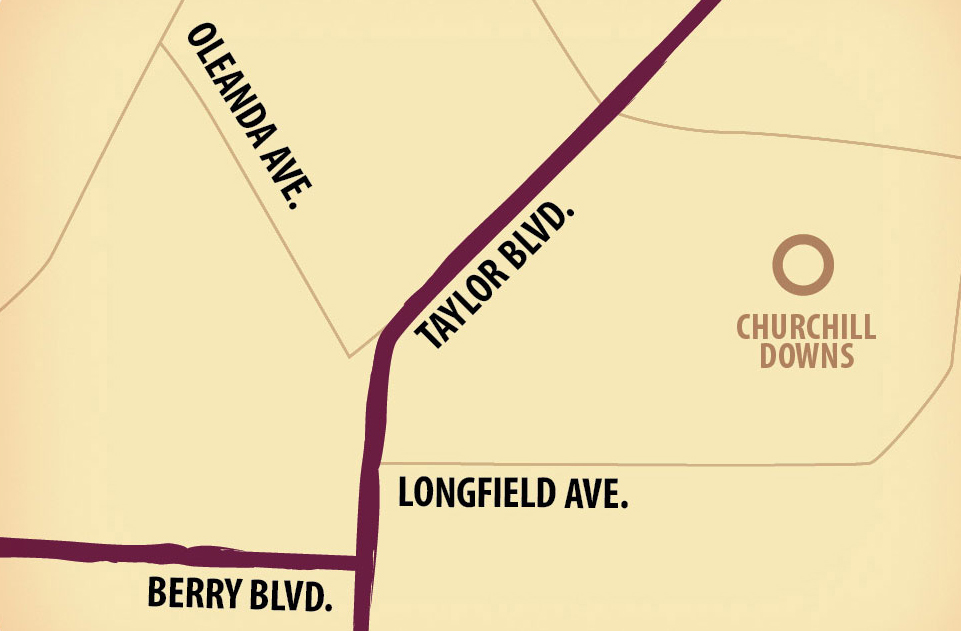 Rumors of a possible retail center at the corner of Taylor Boulevard and Longfield Avenue began circulating in The South End earlier this summer, and neighbors were pleased with the prospect of the demolition of the Deja Vu strip club and adjoining bar.

They were excited by the possibility of new family-friendly restaurants and retail. But their optimism turned to disappointment when the developer unveiled plans at a recent meeting with residents.

He was proposing fast food restaurants, a gas station and maybe yet another “dollar” store.

“I don’t want another dollar store,” said Rosemary Sims, who lives on Longfield Avenue, “but anything is better than Deja Vu. Hopefully we’ll get something that will increase property values and bring more positive development. I hope it looks nice and inspires people to address the clear and obvious issues in our community.”

The proposed site touches four neighborhoods  — South Louisville, Lucky Horseshoe, Oakdale and Taylor-Berry — and could affect future development in each.

By way of disclosure, I live in the neighborhood. I believe as currently presented, the proposal is a clear example of a deficit approach to development, focusing on problems in the community instead of building on its strengths. The developer presents the plan as a solution to complaints about Deja Vu, but then encourages other problems through a design that all but guarantees an increase in traffic, litter and loitering. It assumes the worst about the community and then builds an environment for those assumptions to manifest.

Here is what was presented:

The meeting Sept. 5 was led by developer Gary McCartin of Bluegrass Developers, LLC, and civil engineer Jennifer Caummisar-Kern of Accurus Engineering. Caummisar-Kern presented the proposal to develop the east side of Taylor Boulevard from Longfield Avenue to Oleanda Avenue, dividing the three-acre area into five lots.

In response to comments from community residents who stated a preference for a sit-down restaurant and a high-quality grocery store, McCartin asserted that the neighborhood would not support a sit-down restaurant, and that the retail lot was not large enough for a grocery. He said the plan was developed with resident use in mind.

Oakdale resident Jennifer Nunn voiced her concerns that the plan would draw businesses that extract money from an already-impoverished area while paying unlivable wages and inhibiting further development.

“I know Deja Vu has been problematic for neighbors for a long time,” said Nunn, “but trading it for more predatory and problematic business isn’t going to help. I don’t think this would fly with anyone if he wasn’t looking to replace a strip club.”

Efforts to reach Deja Vu for comment were unsuccessful.

Some remained optimistic that a fast-casual restaurant, or bakery, could occupy at least one of the lots, crossing their fingers for something like Panera Bread. That outcome is uncertain due to the lot sizes. According to Panera Bread Co.’s 2016 annual stockholder report, its stores average 4,500 square feet. The largest of the restaurant lots tops out at 3,010 square feet.

Within a two-block radius of the proposed development stands five fast-food restaurants with drive-throughs, as well as two bargain stores with the word “dollar” in the name. Neighbors raised concerns about the redundancy of fast-food businesses and that the small retailer could be another bargain store or check-cashing service.

McCartin said no decisions have been made, but he considered a small retailer similar to the nearby Family Dollar and Dollar General to be a good candidate. One option he mentioned was Dollar Tree.

Patrick Alan, who lives adjacent to the site, noted that beyond removing the problematic adult entertainment center, the proposal offers little improvement in terms of commercial options, and does nothing to attract visitors or challenge the perception of the area.

“This is a good start,” he said, “but you’re not proposing anything that we don’t already have access to. I can already walk to several fast food restaurants and three dollar stores. It’s disappointing that this is all you’re offering for our neighborhood.”

Residents had concerns about the fate of mature trees on residential property. Caummisar-Kern explained that the plan must meet a 20-percent tree-canopy requirement. The plan does not commit to preserving any trees and proposes meeting the canopy requirement solely through new planting. Caummisar-Kern clarified that once the property is acquired the project team may find it more cost-efficient to preserve the existing canopy.

She also said that the requirement to visually screen the property from neighboring homes could be accomplished with landscaping that would improve the site aesthetically.

The proposal has not been scheduled yet for a hearing by the Planning and Development Commission. Public comment period will end once the commission makes its recommendation to Metro Council. Comments about the proposal can be sent to case manager Joel Dock at [email protected]