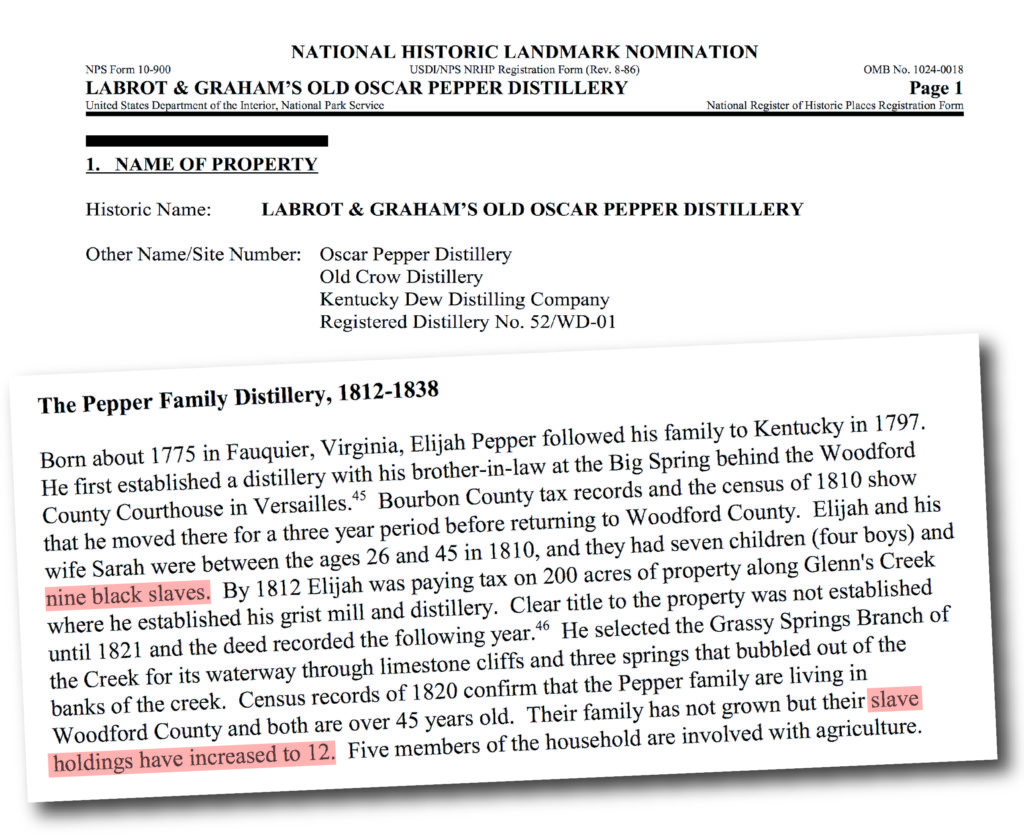 How important were slaves to American whiskey?

Last year, Louisville-based Brown-Forman told the New York Times that slave Nearis Green actually taught the Jack Daniel how to distill. I was quoted in this story and would like to elaborate about the enslaved people’s contributions to American whiskey.

At slave auctions, sales representatives would notate distiller-trained slaves, many of whom previously worked on Caribbean sugarcane plantations and contributed to the distillation of sugar’s byproduct, molasses, to create rum. These skillsets earned premiums for their owners and made them attractive to buyers.

The biggest names in whiskey benefited from slave labor.

One of the most-widely referenced names in bourbon — Elijah Craig, whom the industry dubbed the “Father of Bourbon” — owned 32 slaves, according to 1800 tax records. Craig’s name dons a bourbon brand today.

Kentucky’s John M. Sutherland, Moses Tyler, and William Calk were among Kentucky’s first and most-important distillers. They helped establish bourbon whiskey, opening sales channels, while creating jobs and opportunity for the Bluegrass State. They built Kentucky’s signature industry with the help of slaves.

Where the Woodford Reserve Distillery is now in Versailles, Kentucky, the Pepper family owned 13 male and 12 female slaves in the 1800s. What impact did they have on one of the state’s most-important distilleries? [To Brown-Forman’s credit, it has never hidden the Pepper family’s slave records and mentioned them in its National Historic Landmark application.]

Records suggest slaves rolled barrels and gathered grains, but it’s only assumed they did more than manual labor. African-American men appear in early distillery photographs seated next to white men, perhaps a look into how they were treated. But the distillers kept lousy records, as it is, and it was not in the practice of 1800s-era businessmen to offer credit to women or minorities.

But more historical pieces are being unraveled.

This past week, a Spears family portrait surfaced at an auction. Distiller Jacob Spears is perhaps the first true bourbon distiller. The painting suggested Spears, a slave owner, had African-American grandchildren.

According to the Lexington Herald-Leader, in the 1970s, Lockhart Spears acquired portraits of a black man and woman, whom he thought were the children of Noah Spears, Jacob’s fifth child.

Auctioneer Mark Mattox sold the pre-Civil War paintings for $20,000. We know very little about the man and woman, but the fact that they’re Spearses is a great step in American whiskey history.

As I told The New York Times, we may never know the full contribution of slaves in American whiskey. But with each passing year, I and other researchers find more about their contributions. Let’s hope these men and women get the credit they rightfully deserve. •

Fred Minnick is a Wall Street Journal bestselling author of the award-winning “Whiskey Women,” “Bourbon Curious,” “Bourbon” and “Rum Curious.” He is the Bourbon Authority for the Kentucky Derby Museum and regularly contributes to international publications.