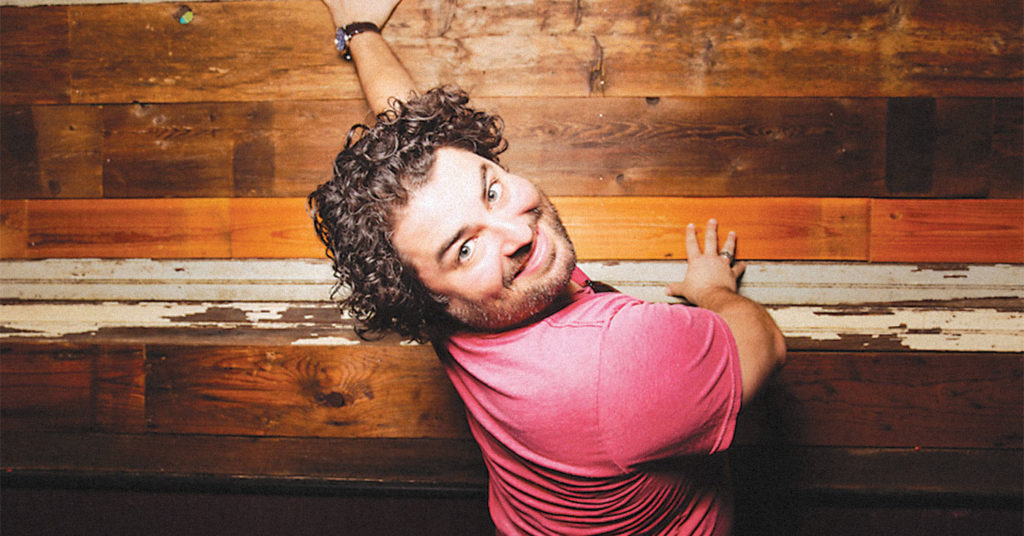 Growing up in New Orleans, comedian Sean Patton could pick out the “bad tourists,” the ones who “go to Hard Rock Cafe and then get on Facebook.” For those, he said, he reserved a special amusement: “They’re the ones you can make fun of with the cool tourists.” Now living in New York City, Patton has generated buzz by telling offbeat stories from his lifetime of awkward situations. He has appeared on NBC’s “Late Night with Jimmy Fallon,” TBS’ “Conan” and Showtime’s “Live from SXSW.” He’s also all over Comedy Central with appearances on “This Is Not Happening,” “@midnight” and “Live at Gotham.” On Tuesday, Patton will perform at Kaiju, bringing New York-based singer-songwriter Caitlin Cook with him.

LEO: Caitlin Cook is going to be with you on this show. What inspired you all to mix comedy and music for this show?
Sean Patton: You see over and over again shows that are just stand-up comedians, and that’s great. But what Caitlin does is unique. It’s fun. It makes points, and she can be funny in her songs. So it’s not a huge distraction from comedy — it just breaks monotony.

Is there connective tissue between comedy and music?
Definitely, because I think both are trying to express an opinion. It’s not theater, where the power comes from the vision of the writer, the director and the actors. What we do is more personal — it comes right from the comedian or the songwriter. I think another very important thing in both comedy and music is rhythm. There is a rhythm to both. I think understanding that rhythm is important to becoming a good comedy performer, to understand the rhythm of a joke and the timing of a delivery. But they’re also very different. Musicians can ignore the audience, and that’s something all comedians are jealous of. They can just get up there and play. It doesn’t always require the audience’s full attention. As a comedian, you can’t ignore the audience. You have to make sure they’re listening and stay on top of them. And comedians are up there by themselves. We don’t plug in, tune-up. We don’t have a band. It’s just us.

New Orleans has a rich musical history. Was your childhood just filled with music?
Absolutely. I saw tons of shows when I was a kid. Two of my uncles were in bands. There are so many bands and brass bands there, it’s just in your ears all of the time. And I don’t know if brass bands are necessarily the next evolution of jazz, but they are certainly rooted in jazz, and I still love it.

Did New Orleans have an affect your sense of humor?
You have to have a sense of humor about yourself living there. My accent’s not so thick now, but as a kid you could hear it a mile away. Also, New Orleans isn’t a rich city. It’s not a poor city. It’s a working-class city. There’s no bubble. You’re around black people, white people. There’s a really big Vietnamese population there. It’s a very culturally diverse city, and you learn to communicate with different people in a very positive way.

Having performed all over the world. Do you have to tailor your material to where you are?
Not really. You’d be surprised, especially with foreign countries. Reactions are going different anywhere you are, but they always get the material itself. I was in Canada, and they’re more up to date with what’s happening in America than most Americans are. They grow up in it. We’re on their border. If something happens to us, it happens to them. They understand that we’re all in this together. How much do you think most Americans can tell us about Canada?

You travel a lot between New York and Los Angeles. What’s the difference to you as a performer?
The West Coast in general, is nicer. It’s a friendlier vibe, which I don’t always trust. The East Coast has a more harsh tell-it-like-it-is vibe, which can also be annoying, at times. But it’s healthy. I live in New York, because I like New York more as a city. I like the frenetic movement of it. There’s an emotion to the air. You’re always on the go. Where LA is more laid back, it’s spread out, you can take your time. Also, I like weather, I like rainy days. It’s beautiful in LA, and I kinda can’t take that.