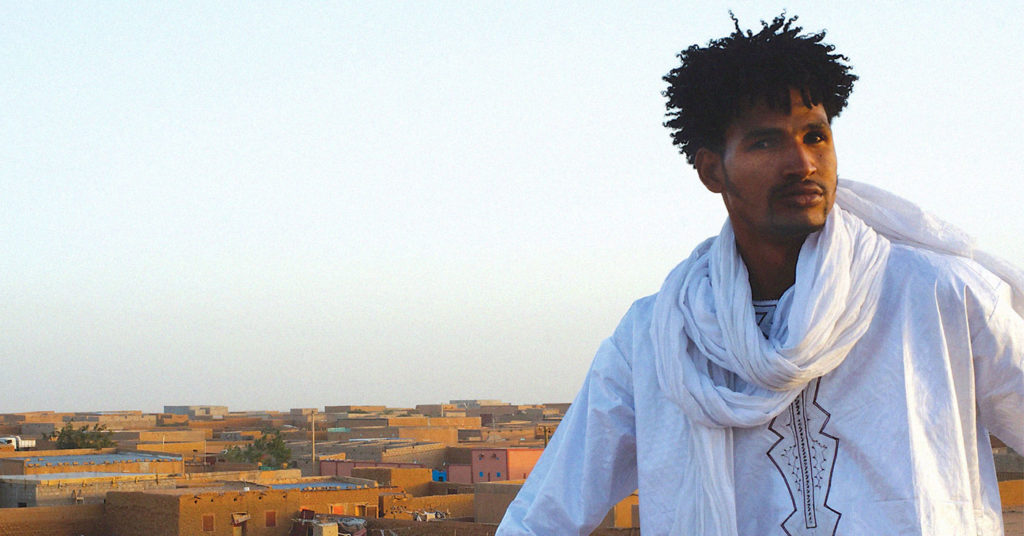 Three days marching across the Sahara to Libya, a roughly 1,000-mile journey through the scorched desert landscape. This is just a snapshot of the life-changing trek that 31-year-old Tuareg guitarist and songwriter Mdou Moctar made two decades ago. After his father’s death in 1997, the young musician left his home of Abalak, Niger, without an instrument, and traveled to Libya in search of work for the sake of his family.

But, often, hardships lead to newfound motivation and opportunity, which is exactly what Moctar zeroed in on after watching another Nigerian artist perform at a concert in Libya.

“That concert gave me the opportunity to think: I needed to play again,” Moctar said. “One week when I got some money, I bought a new guitar.”

Moctar eventually returned home to Abalak before relocating to the city of Agadez, where he decided to pour himself into his passion and pursue a career. “I was very young, and I needed to play,” he said. In Agadez, he continued his musical studies, immersing himself in the city’s guitar-heavy scene. This experience would amount to most of the material on his newest album, Sousoume Tamachek. It is made up of eight early, acoustic recordings, reworked in studio with added chilling overdubs and gentle calabash percussion. The opening track, “Anar,” shares the title of his first solo album, but it does not stay close to the wandering auto-tune sound heard on that record. Instead, his voice and guitar find harmony in dreamy desolate territory.

“The guitar is an instrument that is really adaptive in songs, like in the takamba music,” Moctar said. “And when the guitar started to enter the Tuareg world, they realized that the songs on guitar really fit with the songs of the takamba — that’s why people started to play guitar and really love it.”

Takamba is plugged-in Tuareg music, melding electric desert-blues with traditional acoustic and percussion instruments. It is the music of the displaced, and its popularity has had a dramatic effect on the current young generation of musicians. Going back to the afrobeat revolution headed by Fela Kuti, the sounds of the Nigerian youth once again headed in a new direction.

Moctar broke out of the saturated scene of Agadez somewhat by chance, but it was his verbose tones and emotional playing that brought him an expanded audience. His first album, Anar, was the first experiment — disguising his natural voice with auto-tune and his guitar with dynamic tones. The live album to follow, Afelan, is a string of raw recordings captured in Moctar’s home village by producer Christopher Kirkley, who was moved enough by the guitar ideas to not only record live material on the spot, but he also assisted in producing the next significant piece to the story — a movie soundtrack to a new adaption of “Purple Rain,” taking Prince’s cult classic and updating it with a setting in Niger. International fame came with Moctar starring in the first ever Tuareg-language film, “Akounak Tedalat Taha Tazoughai” (“Rain the Color Blue with a Little Red in It”), affording him the opportunity to land in North America in support of his music in addition to the screenings. On tour with the material of his second solo album, Sousoume Tamachek, Moctar is currently performing in North America for the first time with a full band.