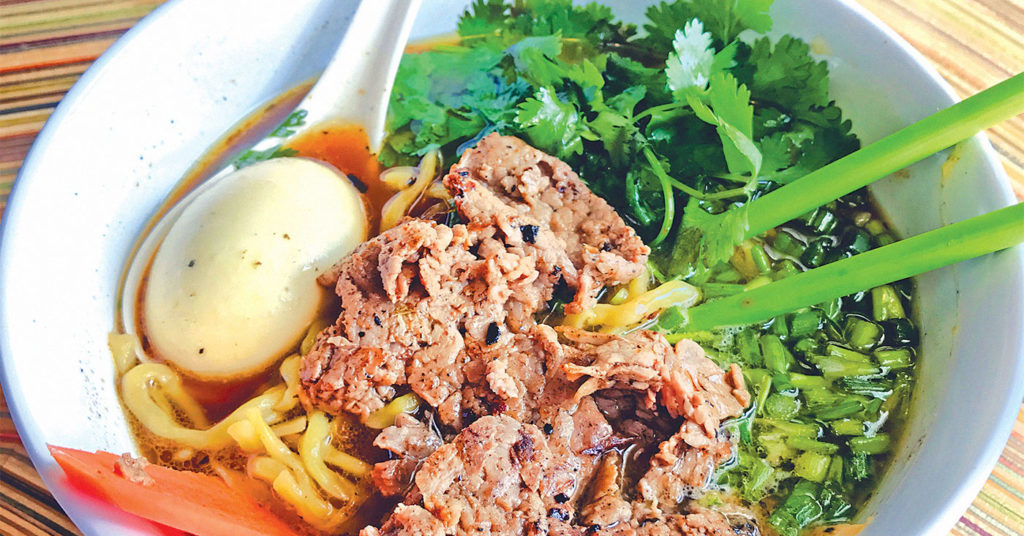 If you held a magical mystery mirror up to Louisville’s historic Germantown-Schnitzelburg neighborhood in hope of perceiving what’s going on in this changing community, the chances are the image that first appeared would be Lydia House.

Why Lydia House? Consider its history. The sturdy, two-story frame building was born more than a century ago as a typical urban corner store with room for the owner’s family to live upstairs. It became Flabby’s (later Flabby Devine’s and then Flabby’s Schnitzelburg) by mid-century, and so it remained for some 60 years, a classic Germantown saloon that seemed a moment caught in time. Until it wasn’t. It abruptly closed in 2010, briefly reopened shortly thereafter under new ownership, but just wasn’t the same. Even its famous rolled oyster, replicated without the secret family recipe, failed to satisfy.

Left vacant for a year or two, the old building was showing signs of deterioration until new owners resurrected it in 2015 as Lydia House. Much like an old Germantown shotgun house purchased, repaired and flipped to new owners, Lydia House is still a lot like Flabby’s. But — sort of like the neighborhood itself — it adds a distinctly hipster tone that accents but doesn’t entirely cover up the old German beer joint vibe.

How does this work out in real life? Walk into the main room at Lydia House, and you won’t think much has changed, at first. It’s still a long, rather dark room with light red and dark-brown checkerboard floor tiles, cozily spaced tables and the familiar old bar running the length of the room. The big wooden “Flabby’s” sign that once welcomed visitors above the front door now enjoys pride of place behind the bar.

But take another look, and you’ll find that the decor of lighted beer advertising signs and old black-and-white neighborhood photos has been replaced by large, framed outsider art. Undraped tables, every one different in style, add wacky charm with bright colors. There’s also an attractive patio out back for al fresco dining.

The blackboards that once listed daily specials and pitcher prices for Bud, Coors and PBR now bear a well-chosen assortment of interesting craft beers and fancy Belgian brews on draft. There are also short, but interesting and diverse, liquor and cocktail lists. (Neighborhood old-timers need not fear, though, as the old standards — listed as “cheap beer” — are still available in ice-cold cans.)

Now check the menu, and you’ll find we aren’t in Flabby’s any more, Toto. The regular menu is offbeat and eclectic, starting with two slices ($2.50) or a four-slice basket ($5) of buttered, toasted, Blue Dog Pugliese bread, with your choice of a dozen house-made spreads for 50 cents each.

Everything we tried was very good. “Greasy, but in a good way,” Mary said, celebrating dishes that perhaps reflect Flabby’s heritage in a modern sensibility that’s more about sensual pleasure than piling up Weight Watchers’ points.

A side of grilled kale ($2.50) featured fresh greens torn in bite-sized bits, gently grilled and dressed in a deliciously garlicky oil infused with lemon.

Another side, green beans ($2.50), gave this humble vegetable a Japanese accent. They were briefly steamed until just cooked but still slightly crunchy, and then dressed with a salty, earthy mix of crumbled black nori seaweed — the stuff that wraps sushi rolls — and miso, the fermented soybean paste that gives Japanese soup its salty, umami-loaded flavor.

You’ve heard of grilled cheese. You’ve heard of tuna melt. It is possible, however, that Lydia House will provide your first exposure to kimchi melt ($10). I suggest availing yourself of this introduction, as it is a surprisingly memorable sandwich, a mouthwatering and surprisingly filling combination of tastes and textures. Built on perfectly-grilled, buttery, thick slabs of rye, it’s loaded with flavorful chunks of rather mild kimchi, molten, aged white cheddar, a schmear of Russian dressing, and your choice of succulent pork belly (carnivorous) or tender, startlingly-beefy tempeh sausage (meat-free).

A bowl of ramen-style noodle soup was served in a large bowl with a Chinese motif and brimful with a long-simmered, fatty roasted bone broth filled with toothy ramen noodles, a whole shoyu egg, and two large, thin slices of briefly seared beef that appeared to have been pounded for tenderness. The dish was topped with scallions, ginger-pickled carrot chunks, a load of chopped green onion, fresh cilantro and nori-miso butter. The beef and the broth were rich and a bit funky, with a good intense flavor. The soup was $11.50 with an additional $3 charge for the beef and 50 cents for the cilantro. If you want to take this dish vegetarian, it’s simple to substitute mushroom broth and tempeh, tofu, mushrooms or other veggies for the beef.