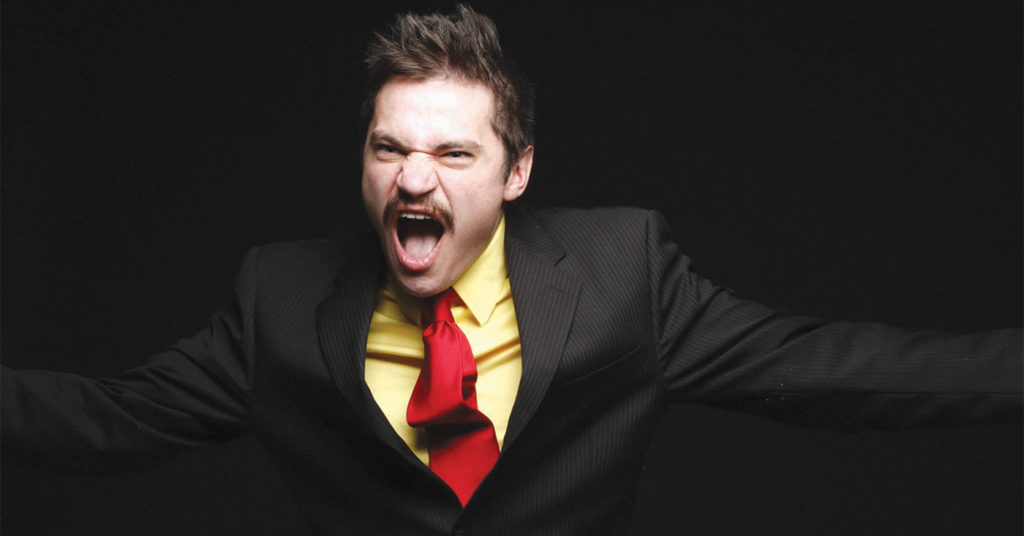 When Alex Stypula performs, no topic seems off limits. His sense of humor is often as dark as it is absurd, tackling taboo topics that include bestiality, suicide, furries and bird vomit. Stypula won the Gilda’s Club of Pittsburgh’s Great Comic Contest, makes regular appearances on the “Drinking Buddies” podcast and cohosts his own true-crime comedy podcast “Give Me Murder or Give Me Death.” Last year was the release of his debut album Dolphins are Garbage. Stypula will be in town this week for one night only at Purrswaytions.

LEO: You’ve been through Louisville before. Do you have any fond memories of being here?

Alex Stypula: I was there last year. At midnight, it turned into my birthday. We were pretty drunk, and I remember at three in the morning the bartender had to beat some dude up. I mean, he was being a real dick, and he deserved it. That was a highlight, I would say. But yeah, that was a pretty cool birthday present last year, just getting to spend it in Louisville.

Does good stand-up comedy push people outside of their comfort zone?

Not necessarily. I think it’s more of a challenge to do that. I think the laughs are far more rewarding when you take people somewhere they don’t think they want to go — and then they find themselves laughing. That said, I definitely don’t do that on purpose, that’s just the kind of stuff that comes up in my mind to try and make funny.

Have you ever written a joke that you had to apologize for later?

No. I’ve definitely told jokes that weren’t very good, or were a bit too much, that went a little too far. But you know quickly by telling them once or twice, and then you get rid of it. But I’ve never had to apologize for any of that.

But you did have to clarify that you don’t actually have sex with dogs.

Yeah, that’s a thing. No one has ever actually said to me, ‘Hey, I think you really have sex with animals.’ But look, if you tell enough bestiality jokes, people look at you in a certain way, for sure.

Since releasing Dolphins are Garbage, I assume you’ve been working on new material. What’s been inspiring your new jokes?

Less bestiality material. I wish I could broach politics, but I can’t. It’s just not in my wheelhouse. I mean, I really don’t like Donald Trump… I mean I don’t like him a lot. My mind is fried even thinking about it. It’s such a bizarre weird joke for what he is and what he’s doing, it would be hard to make a joke out of it. It’s like this whole country is a joke at the moment.

Yeah, my jokes are getting more observational these days. Things that occur to me or something that happens to me, and I then extrapolate on that to the umpteenth degree. There’s a bit I do about pretzels that was something that really happened to me; it was a four-second interaction. Now, it’s a six-minute bit.

Your album is called Dolphins are Garbage. Why are dolphins garbage?

How to answer this? After telling that joke and naming my album that, people think that I actually hate dolphins. I kind of don’t, but in reality they are pretty evil. Years ago I saw this documentary called something like ‘The Dark Side of Dolphins.’ And I found out that they rape other dolphins and, if I remember correctly, they are the only other animal besides humans that murder for fun. Somehow, I turned that into a joke in my mind, and now I have an album called Dolphins are Garbage. •