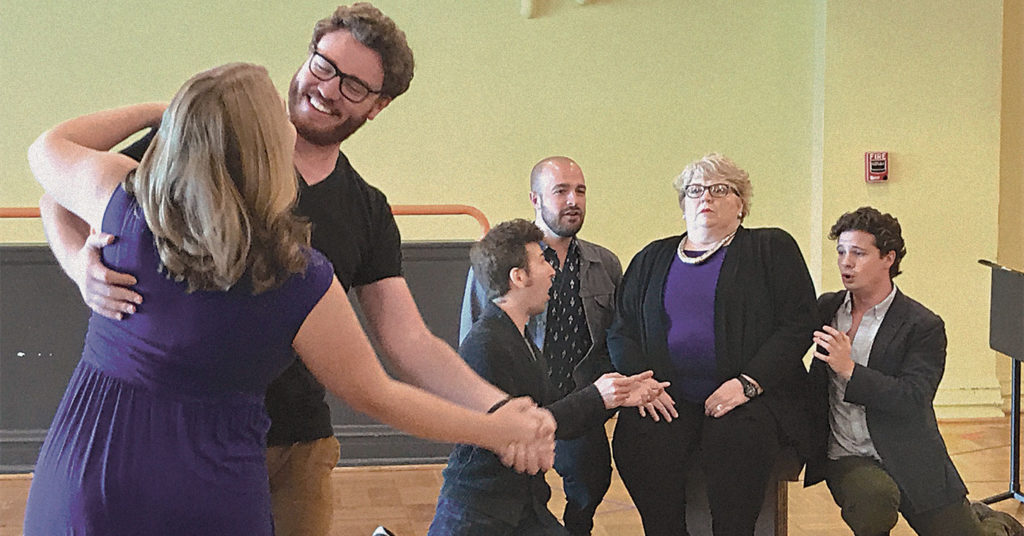 Let’s see… how to explain this?

Kentucky Opera opens its 2017-18 season Friday, Sept. 15, and Sunday, Sept. 17 at The Brown Theatre with a new production of the Richard Strauss opera “Ariadne auf Naxos,” which is actually an opera within an opera. Or an opera about presenting an opera at a present-day gala event that includes other acts, including comedians, plus dinner and fireworks — but is running behind schedule. That’s the complication, and the host’s brilliant solution is that the opera troupe will present its show, which is a semi-tragic love story set long ago on the Greek isle of Naxos, at the same time as a troupe of commedia dell’arte players present a slapstick play, with both groups sharing the same stage.

Now, right there, you’d say, would be a problem.

Heaven knows it is difficult enough to get all the singers, and their egos, on the same operatic stage at the same time — let alone share the stage with… comedians! You can imagine.

In the Kentucky Opera production, the Greek opera part is sung in German, with the story around it sung in English — both with projected subtitles (thank goodness!). Audiences, of course, are familiar with the play-within-a-play format of numerous Broadway stage productions and movies. But it’s a pretty novel idea for grand opera.

Kentucky Opera is going to give it a go — and General Director Ian Derrer said the company will take advantage of presenting such a unique opera to give its audiences a special look inside the world of opera on stage.

“The piece,” said Derrer, “lends itself to many interpretations, and there have been many different versions of the time period in which it is set — and ours is no exception. There’s an element of it that’s an opera-within-and-opera. That will be traditional. But the build-up before that will be untraditional. Lots of audience participation.”

The experience may begin even before the curtain rises.

“Part of wanting to do ‘Ariadne’ is to give the audience a glimpse into the backstage of theater, and an opera house, in particular,” said Derrer. “The opening prologue introduces the composer, the music master, the wig maker, the tenor — and the prima donna. All those characters, and you see the backstage antics, all there in the court of a wealthy patron who has brought them there for performances, one after the other.”

“In the interest of time,” said Derrer, “the host is asking — or telling — the distinctly different troupes — one being the opera company, and the other being a troupe of commedia dell’arte actors — that their two performances must occur simultaneously, because they can’t delay the fireworks that are scheduled to go off at a certain hour.”

Strauss (1864-1949) composed “Ariadne auf Naxos” in 1912, with several rewrites in succeeding years, including a version with cuts by Conductor Bruno Walter. Writer Somerset Maugham borrowed some of the plot for the story “The Perfect Gentleman.” So the opera has been around the block a few times. And now to Kentucky.

Strauss is a fascinating figure for music historians in that he comes along as an inheritor of the work of the great 19th century composers, stepping into the 20th century. He’s not related to the Viennese Strauss waltz kings, but rather the son of the noted French horn player Franz Strauss, who hated composer Richard Wagner with every bone in his body. But the younger Strauss was a big Wagner fan, and later was kind of drafted into a role as composer of record for the Third Reich. He liked the attention, at first, but soon wised up, quitting the Nazis and ducking out of public view.

The music of “Ariadne” differs from Strauss’ grander operas, such as “Salome,” with its erotically orchestrated “Dance of the Seven Veils.” It’s not as fabulously full as his tone poem “Also Sprach Zarathrustra,” familiar to movie fans as the mind-blowing opening theme of “2001: A Space Odyssey.” Rather, “Ariadne” is a Mozart-style orchestration. Like the horn concertos Strauss wrote that reference those of Mozart. And there is humor in “Ariadne auf Naxos.” As in the fun of Strauss’s “Till Eulenspiegel’s Merry Pranks.”

As for the story, it’s a mixture of Greek tragedy and the backstage pratfalls of workaday musicians. It’ll be neat if Kentucky Opera captures that.

Taking the role of Ariadne is the acclaimed soprano Christine Brewer, with Elizabeth Sutphen singing Zerbinetta, Ariadne’s perky pal. In the story, Ariadne has set off to the Greek island of Naxos to die of forlornness because her lover has jilted her and she has plunged into a pitiful case of unrequited love. But Zerbinetta is having none of that, and tells Ariadne to forget the old guy and find a new one.

In a preview at a live “Lunch and Listen” show last week at radio station WUOL-FM, Sutphen said Zerbinetta would never pine away for some guy who ran off with another girl. “I can be the hero of my own story,” said Sutphen. “I don’t have to be a casualty for someone else.”

Of course, Ariadne does meet a new man, the handsome Greek god Bacchus, sung by Garrett Sorenson. In the opera-within-an-opera format, Sorenson also plays the singer who plays Bacchus. Sorenson just finished a role with Sante Fe Opera as Steve Wozniak in the new opera “The (R)evolution of Steve Jobs.”

That’s a bunch of very different roles, including two in one opera. Radio host Alan Brandt wondered how Sorenson seemed to switch so deftly between characters.

Of course, the real “app” for the cast is the singing — what opera is all about.