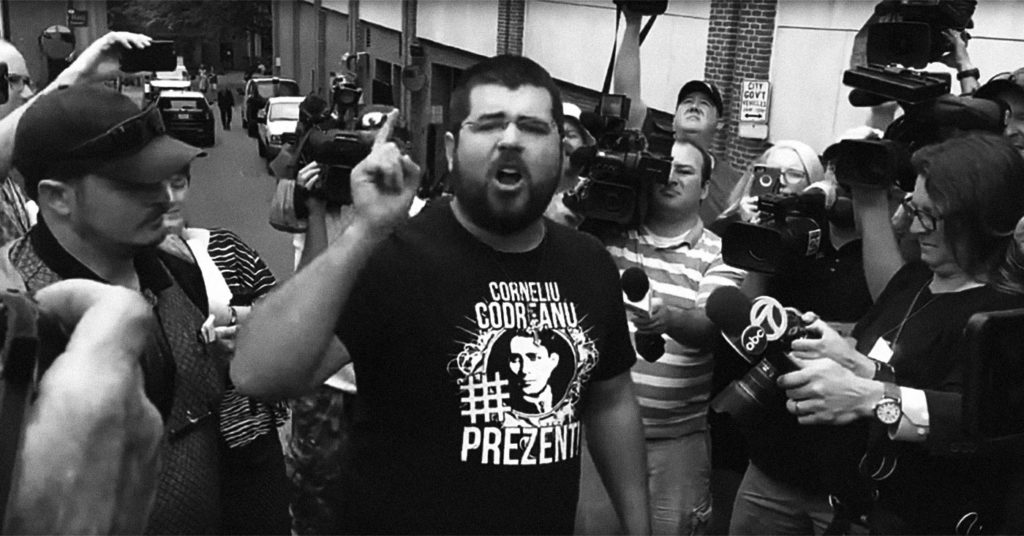 [Editor’s Note: This story is part of a package on local hate groups, which also includes articles about the prevalence of hate groups in Kentucky and a resister’s warning. Also, we at LEO expected that publishing a package of stories on hate groups might generate controversy, so we talked with an ethicist from the Poynter Institute for his take. To read the full Editor’s Note, go here.]

PAOLI, Indiana — A burly young man pulls into the parking lot of a Wal-Mart on a weekday afternoon. He leans out the window of his beat-up white sedan and grins.

“Ya’ll looking for some neo-Nazis?”

Meet Matthew Heimbach, the white nationalist who has set up shop in this small town an hour northwest of Louisville. From Paoli, he controls the Traditionalist Worker Party, a small but growing white nationalist organization.

Heimbach, 26, gained national profile when a viral video circulated showing him pushing a protester and screaming at her during a Donald Trump rally in Louisville in March 2016. He pleaded guilty to an amended charge of second-degree disorderly conduct and was given a suspended, 90-day jail sentence.

Heimbach has emerged as a leader for the “alt-right,” a movement that espouses racist, anti-semitic and nationalist ideologies. He has played a key role in uniting the fractious movement, an effort that coalesced with the deadly rally in Charlottesville in August.

“Heimbach is a well-known figure in the white supremacist community,” said Marilyn Mayo, who tracks hate groups for the Anti-Defamation League’s Center on Extremism. “He bridges the gap between what I call the academic racists and the hardcore neo-Nazis.”

The Traditionalist Worker Party is a white rights advocacy group that is anti-capitalist, anti-semitic and anti-diversity. The group’s ultimate goal is the creation of an all-white ethno-state that people of other races would need a visa to visit.

Heimbach’s ethnocentric rallying cry is garnering support from other nationalists and disaffected whites in the dark corners of the internet. In the wake of Charlottesville, Heimbach says his group grew by 50 percent, from about 500 to 750 members nationally, though the Southern Poverty Law Center says those numbers are often exaggerated.

Now, Heimbach says he has a grand scheme, spawned in Paoli and intended to spread across Kentucky, through Appalachia and the Midwest, to grow his membership rolls faster than ever before.

On this late August day, Heimbach opens his playbook, offering a window into his recruitment tactics and to-do list. He plans to capitalize on the region’s economic woes, mimic growth strategies of terrorist organizations and win political power, one local election at a time.

Academics who study these kinds of movements say his chances are dim. Experts on hate groups say he’s more talk than action. But his actions, at least in the last year, have earned him a degree of notoriety that he plans to build on, and those same experts are watching closely.

While his 2-year-old son — named after Nicholas II, the last czar of Russia — plays on a nearby jungle gym, Heimbach lays out his worldview.

There’s an incongruity between his words and his demeanor. He laughs jovially while denying the Holocaust. He grins in the face of direct contradictions of his claims. He said his wife doesn’t want reporters in their trailer compound, quipping, “if mama ain’t happy, ain’t nobody happy.”

Though his membership hasn’t even reached four figures, he speaks with the surety of a man who believes his cause is being elevated by the White House, in the media, on alt-right websites and every time he returns to nationalist message boards.

Despite national attention, Heimbach’s Traditionalist Worker Party has made limited inroads locally. Heimbach said Kentucky — a state with a history of harboring hate groups — has the largest offline chapter with 100 members. He boasts about the Indianapolis group growing by 15-fold — from two members to 30.

“At times they can roil communities,” said Heidi Beirich, director of the Intelligence Project at the Southern Poverty Law Center. “They can have rallies that are upsetting and some of their ideas can lead to people like a Dylann Roof,” the white supremacist who killed nine people in a black church in Charleston, South Carolina.

‘Your Future Is Our Future’

In late April, the Traditionalist Worker Party zeroed in on Pikeville, the largest city in the Eastern Kentucky Coalfield.

The “rally for white working families” was the closing act of a white nationalist retreat Heimbach led nearby. But he was less interested in the groups that had come to hear him speak. This was an opportunity to canvass the community, a key facet of his plan to grow support.

Eastern Kentucky has some of the lowest rates of high school education in the country. Unemployment is nearly double the national average. Disability rates are staggering. It’s also overwhelmingly white.

It’s a far cry from the wealthy, diverse county outside Washington, D.C., where Heimbach grew up.

“To the people of Pike County and the surrounding region, we’ve heard you. We know you’ve been left behind, economically and socially,” Heimbach said in a video appeal before the rally. “We are here to stand for you and to stand with you. Because your future is our future.”

The strength of that shared future was tested. The retreat had to move from a state park to private property. Local organizers printed t-shirts that read “No Hate in My Holler.” Anti-fascist groups planned a counter-protest. The city passed a last-minute prohibition on wearing hoods and masks.

The rally itself was brief but loud. Planned speeches on white rights were, at points, drowned out by chants, screams and whistles from the opposition.

And then, silence. Both sides packed up and went home. In the end, the Lexington Herald-Leader estimated that, at its peak, Heimbach’s big, Appalachian coming-out party had about 125 supporters. He called this a victory, but across the street, counter-protesters numbered closer to 200.

Inside The White Nationalist Playbook

Their recruitment approach, Heimbach said, is modeled after “Hamas, Hezbollah, [and] traditionally, the Irish Republican movement.”

The community building is the part Heimbach hopes to emulate. TWP bills itself as nonviolent, except when provoked, and the group has been involved in rallies that turned violent.

Explaining why he shoved a protester in Louisville, Heimbach said protesters were being disruptive, Trump sought removals, and police weren’t taking action. “When Mr. Trump says ‘get them out of here,’ he had the right to ask for that. At that point, the police weren’t doing anything,” he said.

The protesters have said they were not being disruptive, but rather were at the rally to protest peacefully.

TWP held a canned food drive before the Pikeville rally. Heimbach said a few members in Texas helped out with Hurricane Harvey relief. But beyond that, the group has not built any social service infrastructure.

“When the system is unable or unwilling to fulfill the needs of the community, the nationalists step up,” Heimbach said.

The terrorists groups cited by Heimbach also legitimized themselves by winning elections. In 2016, the Traditionalist Worker Party endorsed a candidate in a Tennessee congressional race. Rick Tyler’s “Make America White Again” campaign garnered only 1.9 percent of the vote. In Heimbach’s version of events, he recalled it being closer to 5 percent.

He said he has lined up TWP candidates to run in 2018 for an Indiana county council seat and several local, nonpartisan races in Texas, North Carolina and Tennessee.

Voters won’t hear claims of “Make America White Again” or see TWP logos on any campaign mailers. Instead, they’re likely to hear Heimbach catchphrases like “securing a future for our children,” “advocating for the silent majority” or appeals to “those left behind by globalism.” No one will use the word “white.”

Heimbach said TWP doesn’t shy away from discussing race, but candidates are looking to avoid what he calls the “media firestorm of voting TWP.”

“I think in 2018 we’re going to win at least several of these races and it’s not going to be a big media spectacle, because they’re not having to identify with a party, they just identify with their ideas,” said Heimbach.

“I think [Heimbach] forgot that poor doesn’t mean ignorant,” said Dessica Albertson, one of the founders of the Progressive Women of Orange County. “There are a lot of intelligent people in this community and they aren’t necessarily looking for a place to blame for jobs not coming here.”

Heimbach is encouraged by the far-right, nationalist parties gaining power in Europe and the recent Brexit decision. These movements relied on economic anxiety and a cultural sense of being left behind, rather than terroristic measures, to achieve their goals.

Can Heimbach’s Party Pull It Off?

This community organizing playbook — and the comparison to terrorist organizations — is a new angle for alt-right groups.

“It concerns me,” said Marilyn Mayo, with the Anti-Defamation League, but only “if I really believe that he had the funds to do that. The question really becomes whether Traditionalist Worker Party can really carry out their plans.”

Mayo has been tracking Heimbach’s white nationalist activism since his college days. She said providing health clinics and food banks is the latest in a long line of his grand plans that fall apart due to a lack of funding or interest.

The difference now, Heimbach said, is his growing stable of supporters. But Heimbach will need more than a few converts to gain any real momentum.

“I don’t think any voluntary effort by anybody is going to make much of a difference in the scale of need we’re talking about,” said Jason Bailey, executive director of the Kentucky Center for Economic Policy. “Without the public dollars that come in from these programs you’re not going to be able to make a big difference.”

Just a few days after Heimbach outlined his plan to fix the social safety net across Appalachia, the Louisville judge handling his criminal case deemed him indigent and waived court fees associated with his conviction for shoving the woman at the Trump rally.

But if Heimbach found some neo-Nazi angel investor, could his grand plan take root?

“He has this idea that disaffected whites are so angry or so needy that they would really accept the help of anyone who comes in,” said Mayo. “I think that people are aware of when people are trying to use them to promote some kind of ideology.”

While Appalachia voted overwhelmingly for Trump, Mayo said it’s hard to believe working-class whites would latch onto a socialist, fascist, anti-American group operating under the Nazi banner. The question is whether they’ll have to declare themselves as such.

For all his big talk about America’s downfall and the “success” of the fatal Charlottesville rally, Heimbach knows white nationalism is still a fringe movement. Without offline support from real working-class white voters, he said, “I’m just a crazy guy with a cardboard sign on a street corner.”

There are signs on street corners all over his adopted hometown of Paoli. But they have a very different message. On front lawns and in store windows, in bright colors and big fonts, they all read, “No matter what color your skin, no matter where you are from, no matter what you believe, we’re glad you’re our neighbor.” •