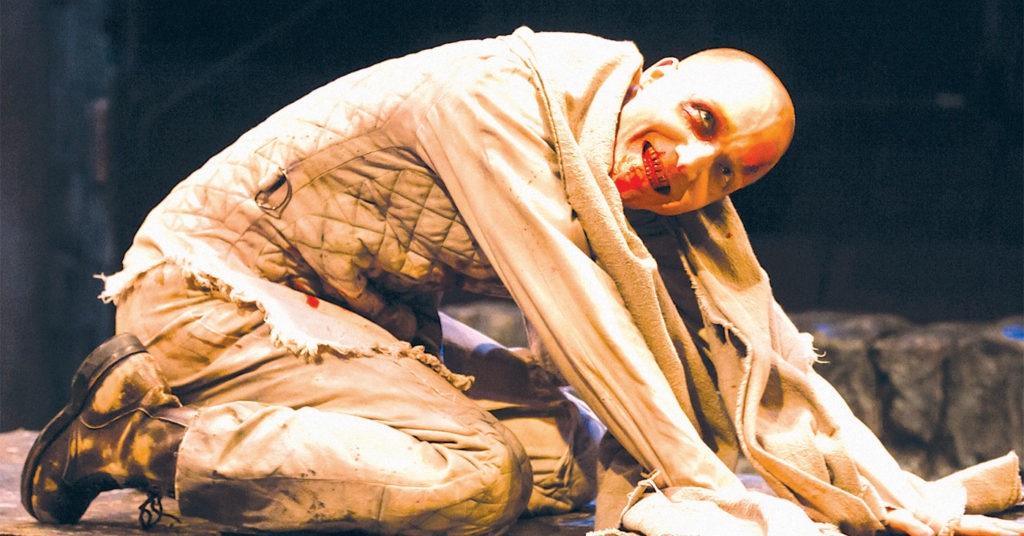 The English philosopher Thomas Hobbes famously wrote that in the state of nature, the life of humans is “nasty, brutish and short.”

If Hobbes had gotten the chance to see Lynn Siefert’s play, “Coyote Ugly,” now running at The Alley Theater in a production directed by J. Barrett Cooper, he might have described it as “nasty, brutish and fast-paced.”

Though he is known mostly as a political philosopher, Hobbes did make observations that are relevant to theater — and specifically to a perennial question: Why are people fascinated by depictions of tragedy? His thought — admittedly oversimplified — is that when people see others in perilous or tragic straits, they take comfort in the fact that they themselves are not in the same circumstances.

That dark vision of how audiences relate to tragedy strikes me as completely wrongheaded, in view of the fact that it discounts the cathartic powers of empathy and compassion, but that’s a discussion for another time.

In the specific case of “Coyote Ugly,” any sane person will walk out of the theater thinking, “I’m glad I don’t live in that world.”

The play focuses on the grim lives of an isolated family in a barren, blazing, hot part of the Southwestern United States. At opening, the household consists of a father, Red (Gerry Rose), his wife Andreas (Kate Brindgardner) and 12-year-old Scarlet (Katherine Martin).

Scarlet is a feral child. She is filthy, furious and violent. Most of the time, she expresses herself in caterwauls of anger and anguish. Andreas expresses her own anger with more wit and cunning — but she too is a seething mass of resentments, equally directed at her uncontrollable daughter and the scheming, drunken Red. She views Red as a profligate womanizer — but he’s such an unappealing drunken lout, that it’s hard to imagine the woman who would have him — until we see him relating to Scarlet.

It turns out there is another member of the family, Scarlet’s brother Dowd (Bob Singleton), who long ago escaped to the East Coast and a life of normalcy. Now he returns — reluctantly — with his wife Penny (Jennifer Riddle), who insists on meeting Dowd’s family and finding out where he came from.

Where Dowd came from, of course, is a hellish horror show. And as the action proceeds, we are plunged more and more deeply into viciousness.

This is a play filled with baroque excesses. The set (built by Greg Sanders), lighting (Martin French) and complex stage management (Jennifer Starr, Julie Yates Mayfield and Kim Avcock) are aptly suited to a play that is loud, abrasive and appalling. And although the nearly unflagging fury of the play sometimes becomes tedious, the vocal and physical virtuosity of the cast is a spectacle worth seeing.

And every once in a while there are deeply affecting quiet moments — that always give way to even greater horrors. For a fleeting moment in one scene, Scarlet and Dowd seem to be bonding — until we suddenly learn the exact nature of their relationship. In another scene, when Red breaks down while recalling a long-ago moment when he experienced a rare moment of kindness, we can almost — but only almost — find it in ourselves to love him.

At Actors Theatre of Louisville, a far more traditional horror show is running, the company’s annual production of “Dracula,” as dramatized by John L. Balderston and Hamilton Deane, adapted and directed by William McNulty.

ATL has staged “Dracula” for nearly a quarter-century and although I’ve seen it plenty of times, I’ve skipped it the last few years. If you are a regular attendee, you don’t need my advice. But even if you caught it last year, take my advice: See this year’s production. It is brilliant.

The production has the rich glow of a Victorian setting (scenic design, Paul Owen; and costumes Lorraine Venberg). And ATL has long since mastered the art of theatrical special effects (lighting, Tony Penna; sound, Benjamin Marcum; media, Philip Allgeier; and Fight Director Dale Anthony Girard). In fact, despite having an excellent view, I’m still puzzled by a scene in which a fully-visible character suddenly vanishes from view).

But it is the charismatic majesty of Count Dracula (Randolph Curtis Ward) and his power to corrupt good people and turn them into minions that shapes the story. Ward is a looming elegant figure with all the wicked grace any Dracula needs. Though it doesn’t hurt that he’s assisted by a fine “Undead Ensemble” (Brylee Deuser, Patterson Larkins, Andrea Abello, Calum Bedborough, Jerardo Larios and Suzy Weller).

And yet it’s the mad, hematophagous Renfield who animates this production. Renfield is the only resident of Seward’s asylum who comprehends the imbalance of power between Dracula and the humans who oppose the vampire. Renfield’s insanity is rooted in his supreme intelligence, psychological sensitivity and electrifying physical energy.

Neill Robertson — a Kentucky Shakespeare regular, whose local credits also include Theatre [502], Pandora Productions and the Commonwealth Theatre Center — commands the role in a way I’ve never before seen. His bravura performance is an amazing blend of verbal and physical gymnastics infused with a sly comic sensibility that channels the spirit of old English Music Hall performers who nowadays can only be seen in ancient films.

It’s a performance not to be missed. •