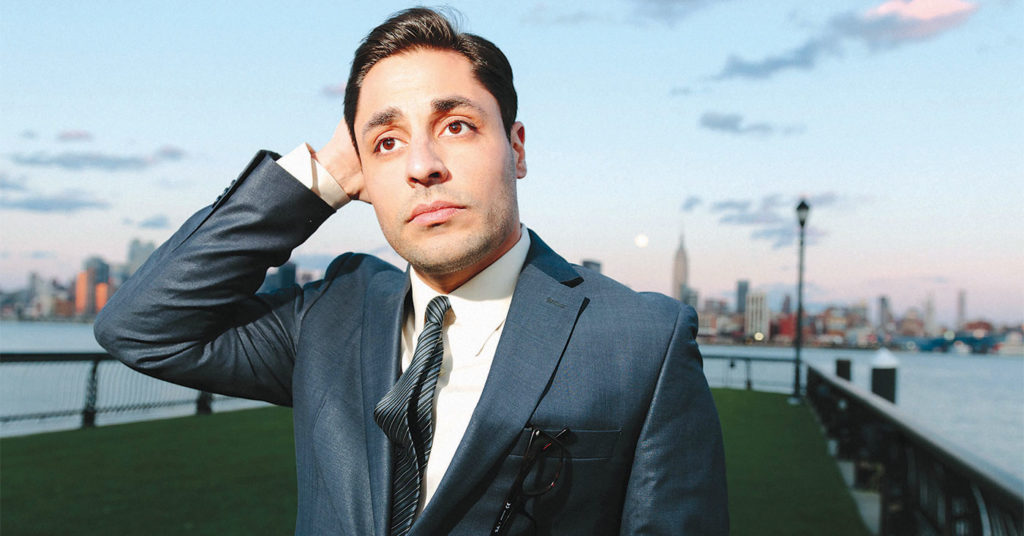 Have you noticed that every time someone mentions speaking in public, someone inevitably dusts off the old adage: “Imagine the audience in their underwear.” Well, Dan Frigolette doubled down on that advice and recorded his debut album Naked and Amused in front of a crowd of nudists. The setting fits Frigolette, a New York-based comic whose material tends to circle back to sex. On Friday, he performs at Mag Bar, another stop on his “Comedy’s Best Kept Secret Tour,” which has had him crisscrossing the country for eight years. These shows don’t aim just for laughs, they also shoot to give back. Frigolette reserves a handful of tickets to each show for military veterans via Vettix.org, and some proceeds from every show go to The Humane Society. All tickets come with a free copy of Naked and Amused.

LEO: You started out to be in radio. What made you transition to stand-up?

Dan Frigolette: I don’t know. My school had a radio station, so I did that all the way through high school. I went to college: My plan was to study radio, get out and do the radio thing. But something happened along the way where I realized that the funny was of the utmost importance to me. So I found a club in town, and said, ‘I have to try this.’ And when I started out in comedy, I wanted to use my name, because, when I was in radio, they encouraged you to change your name. I was going as Johnny Shades, and then Christina Aguilera came out, and I had to learn how to say ‘Aguilera.’ I was totally like: ‘If I have to learn to say her name, they’re going to have to learn to say mine.’

Coming from a background in radio, is music something that has always been a part of your life, as well?

Music is a thing for me. I realized this yesterday, I was really under the weather, and I had to drive like eight hours. And, for some reason, Indianapolis was playing every song I wanted to hear, and, in a sense, it rejuvenated me, like the music healed me. But I’ve never been the guy who has the new cool band on a mixtape — like John Cusack in every movie he makes.

This show is another stop on your ‘Comedy’s Best Kept Secret Tour.’ Perhaps the best kept secret is the charitable aspect of your shows.

I think honestly what it is — comedy is so silly, and as a comedian I love what I do, so it never feels like work to me. So I was looking for that extra piece. Why should people come pay me to do the thing that I love? That seems selfish, so I wanted to add something to make it feel less selfish.

Where did the idea to make this album come from?

I had a really great, polished set at the time. The problem with having a set that solid is that you know that means it’s time to dump it. And the way to do that is you record it and put it out there. That forces you to start writing again. So my friend Andrew Frank in St. Louis had done one of these shows with this nudist group called Naked Adventures, and asked if I wanted to get in on one. I told him sure, and decided to record the album there. They were great, super supportive.

You didn’t perform in the nude. Is that the next album?

I don’t think that adds anything to the art form. I’m not opposed to being nude. I totally would have gone to the party nude. I don’t care. It just doesn’t add to the art of comedy. For years people have done these shows where they perform nude — and it all becomes about the gimmick. And then you’re forced to talk about your dick. Comedians have no problem talking about our dicks. We don’t need another reason to talk about our dick.

What did you observe by being the clothed guy in a room full of nudists?

First, there’s something great about them being this unified group through nudity. Their small talk was very minimal. Right off the bat it’s like: ‘Here I am — this is me.’ Most people walk around a party like: ‘Yo, what do you do?’ Nobody was doing that there — it was like the nudity leveled out the humanity and stripped away all the bullshit. And that’s what’s beautiful about humans: At the end of the day, we all kind of look the same. It’s all about the acceptance thing with them, just about people being people.