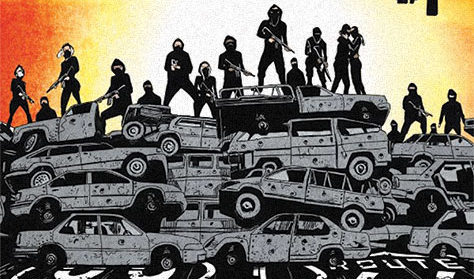 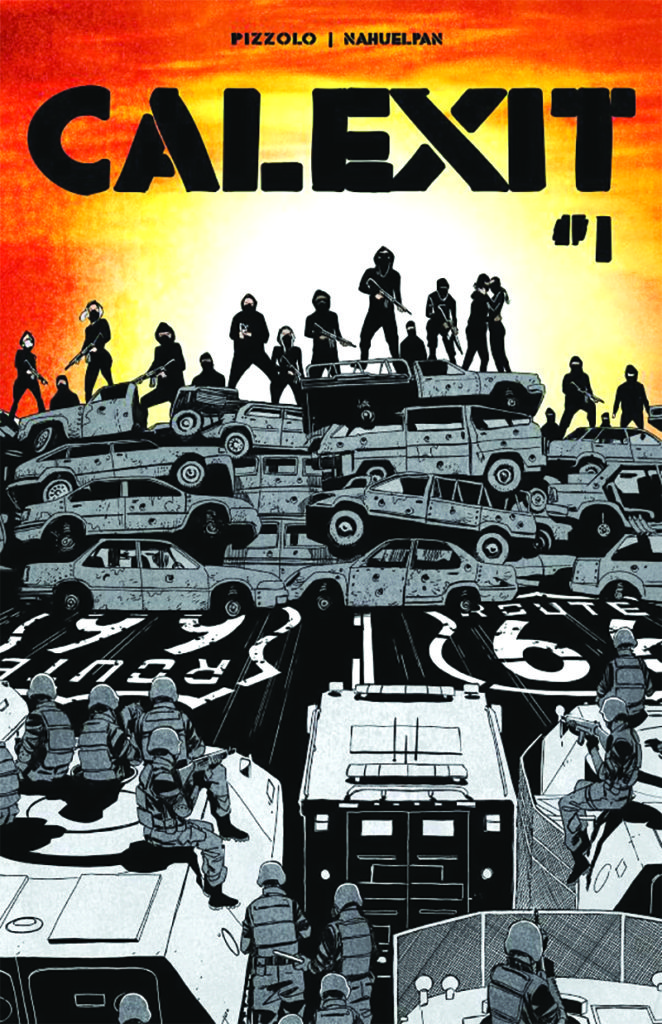 I had thought about reviewing “Calexit”  No. 1 since it came out about a month and a half ago. The book has stayed in the back of my mind. Then, the rally in Charlottesville, Virginia, happened, and last week ex-Sheriff Joe Arpaio got pardoned, and this book just got more relevant with each passing day.

“Calexit” is set in a not-too-distant future when California tries seceding from the United States to keep its immigrant population from being deported after Donald Trump wins a second term. This leads to martial law and the National Guard taking charge. Not that far-fetched, really. And that’s what makes this book so powerful. There’s no terrorist attack, no bombing and no doomsday scenario that leads to this taking place; every event they show you leading to the “Calexit” seems plausible, maybe even likely.

“Calexit” is led by the creative team from the book “Young Terrorists,” Matteo Pizzolo and Amancay Nahuelpan. Nahuelpan’s art is a wonderful mix between gritty and stylized. It reminds me of Jamie Hewlett’s art for “Tank Girl” and The Gorillaz. Colorist Tyler Boss uses a muted palate that keeps everything in check and grounded.

Once you get past the premise of the book, the story is gripping and hilarious. Jalil is a delivery man who will deliver anything to anyone. He operates outside of political motives, and doesn’t take sides. He finds out his next delivery is to deliver a person, Zora, a political rebel who seems to be high up on the most-wanted list.

“Calexit” is a chilling, highly entertaining book that will stick with you for days and weeks after you read it. There’s a second printing of the first issue out now, and No. 2 will be released Oct. 4. • 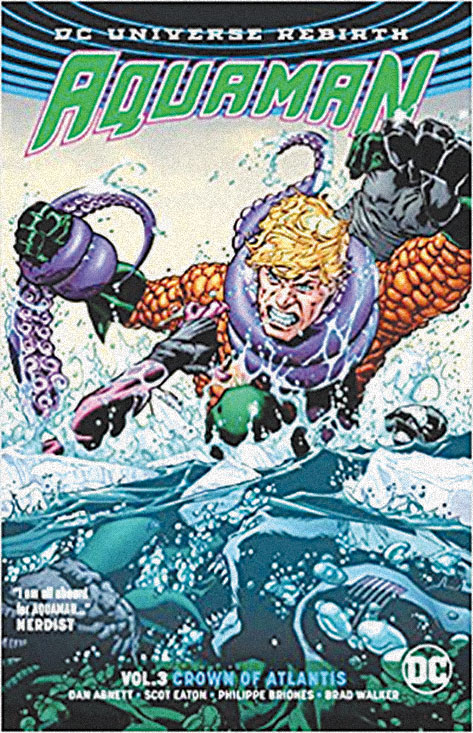 With the threat of N.E.M.O and his arch nemesis Black Manta behind him, you would think our favorite Atlantean king/superhero could turn his attention back to his kingdom. You would be wrong! With a super computer trying to murder Aquaman in the name of friendship, having to fight mutated sea monsters with the same spec-ops team that once had him as their target and then a coup in Atlantis — poor Arthur Curry can’t catch a break.

The nine issues in this book (Nos. 16-24) cover a couple adventures of Aquaman, and while they may seem a tad insignificant on their own, when you read them together, they do a great job of illustrating just how divided Aquaman’s attention has been, and how little attention he’s been able to pay to Atlantis. Dan Abnett has been a very clever writer in that way. It all comes to a head in the final two issues when the coup happens. Will Arthur lose the titular Crown of Atlantis?

I’ll make a bold statement here: Aquaman has been one of the most consistently good books DC has been putting out since last year’s not-quite-a-reboot Rebirth started. Abnett has been writing a fantastic tale of action and political intrigue (fitting for a hero that is also a king!), and the shared art duties of Scot Eaton, Phillip Briones and Brad Walker have produced nothing but solid work. Sadly, this is their farewell volume, but they do leave on a high note!

Aquaman Vol. 3: ‘Crown of Atlantis’ trade paperback is on sale now, along with volumes one and two, and I strongly urge you to pick up all three of them. •