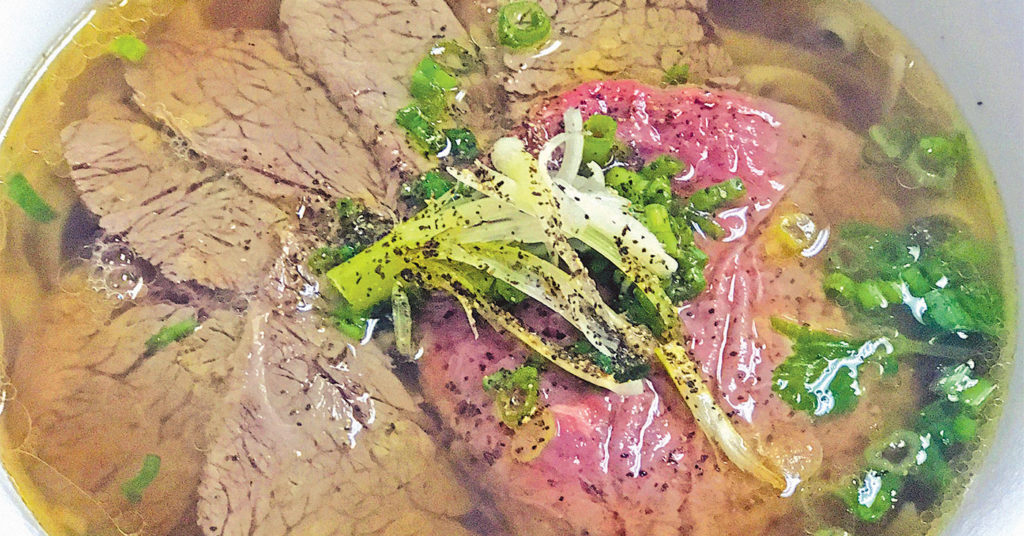 Well, here we are again — another week that finds me torn between two new spots that feature cheap, delicious world cuisine. Bodega mi Sueño near Bashford Manor dishes out mouthwatering Cuban fare in oversize portions in the casual setting of a traditional bodega. Ngon Appétit in Clifton Heights offers a short but tasty list of Vietnamese fare with a hint of the French accent that a colonial empire left behind.

Let’s go to both!

But first, a quick pronunciation lesson! “Sueño,” pronounced “Sway-n’yo,” means “dream.” “Ngon” is a stickier wicket for English speakers to work our tongues around. With a little mentoring from the friendly woman behind the counter, I think I got it down pat:  Say the word “sing.” Hold on to the “ng” sound, and segue it into the “on” bit. Too hard? Maybe you’d better go ask her for yourself. “Ngon” in Vietnamese means “tasty,” and it rhymes with “bon,” so tack on the “appétit” and you’ve got a Vietnamese-French pun.

The big-city bodega is an urban institution — a Latinx mini-grocery, a busy, crowded shop with a bakery counter and a cafeteria line in the back. You’ll find one on just about every street corner in Spanish-speaking neighborhoods in New York City or Los Angeles or Miami. In Louisville, Bodega mi Sueño and other bodegas have evolved to meet the suburban habitat of Louisville’s Latinx diaspora. Rather than being in an old, urban storefront, Bodega mi Sueño is in a shiny shopping center space, just down the way from Target and Walmart and the new Costco near Bashford Manor.

The food is really tasty homemade Cuban, and they scoop it up in huge portions. The backlighted menu board over the cafeteria line offers a dozen dishes, with photos to assist the Spanish-impaired, all for around $5. Just about everyone seems to choose the “completa,” though, a huge combination platter with your choice of main dish for $9.99. The staff is friendly. English is very limited, but a little Spanglish and a lot of pointing will get you what you need.

My brother, Matt, visiting from Lima, Peru, my sister, Amy, in from Irma-battered Florida’s Space Coast, and Mary and I dropped in the other night and covered a large table with overloaded plates. We started with platters of rice (your choice of standard white, fluffy and tender; deep yellow amarillo, colored with turmeric and mixed with bits of boneless chicken; frito, fried Cuban-style, or congris, mixed rice and black beans), and full-sized soup bowls loaded with sweet black beans or tender red beans, both studded with bits of crispy pork. Maduros, fried plantains, were exceptional, slightly sweet rounds of banana-like fruit cloaked in a crisp fried surface; and yuca, the creamy Caribbean root vegetable, steamed with red onions.

Lechon, Cuban-style citrus-marinated, roasted, pulled pork, was good, although it might have been even better if we had come for lunch. By dinner time it had become a little dry. It was still tasty, though, not at all greasy, with delicious crisp dark roasted edges.

Sierra mackerel, a steak cut crosswise through the fish, was firm-fleshed with that deep mackerel flavor that you either love or hate; it was braised in a savory dark-brown sauce loaded with onion, mild red pepper and aromatic bay leaf.

With bottled water and a Jarritos Mandarina soft drink, four of us paid $9.99 each, plus a 25-percent tip.

I’m afraid LEO Weekly’s Taste Bud writer, Kevin Gibson, who wrote fondly of  Sam’s Hot Dog stand on Lower Brownsboro in 2015, is going to be sorry to learn that Sam’s has gone away. I expect his regret will be tempered, though, as it is for us all, by the recent arrival of Ngon Appétit, successor to the late and lamented Four Sisters, serving up Vietnamese-French crêpes, banh mi, and a worthy pho.

Pho and ramen are getting to be as common as chili over spaghetti in Louisville these days, and Ngon Appétit’s take on beef pho ($9.95) is a contender. It was built on an indulgently-rich beef broth that simmers for 10 hours, filled with long, soft flat rice noodles and topped with a prettily arranged circle of rare-pink beef rounds arranged in a flower pattern, with a pile of chopped green onion in one corner. We would have liked a little more cilantro than the random leaf, but that’s picky. The beef was flavorful, with a tender, textured mouthfeel from being pounded thin.

A cup of Vietnamese yellow curry ($3.95) was also a hit, a thick, curry-scented broth filled with tender, long-simmered vegetables: rounds of yam, chunks of potato and a few pear-shaped eggplants the size of grapes. The menu declared it vegan, though it was so rich it could have fooled me.

A well-made goat-cheese and scrambled-egg crêpe ($8.95), folded into a hexagon and discreetly drizzled with balsamic, was large enough to fill a dinner plate; it made a meal in itself.