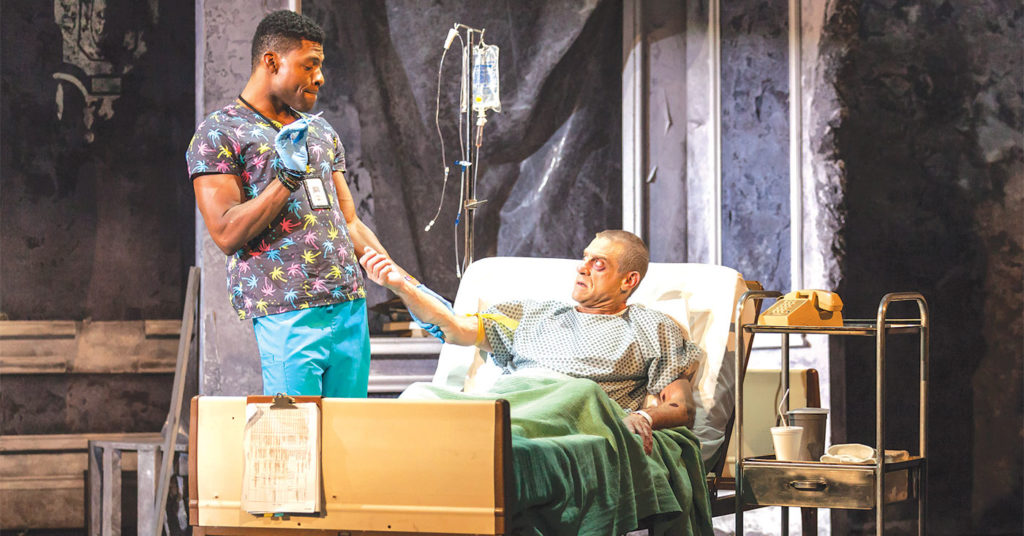 Theater critics spend most of their time building an intellectual framework around the works they appraise. They dissect, analyze, interpret and ferret out nuances. The more important the play, the more deeply they try to delve.

In the realm of contemporary U.S. drama, there is no work more important than Tony Kushner’s “Angels in America: A Gay Fantasia on National Themes.”

So it’s not surprising that an enormous body of critical and scholarly literature has emerged around the play. Kushner builds a dramatic universe where the bruised and brutal and embarrassing world of a hospital bed flows effortlessly into the lustrous strangeness of hallucinatory landscapes that encompass surreal Antarctic landscapes and heavenly boardrooms.

With a remarkably small cast (there are only eight players), he populates the world of “Angels” with an astonishing array of fascinating, richly-articulated characters, some drawn from the pages of history, some fictional and all animated by powerful drives and rich ideas.

And now, a quarter century after the play premiered (“Part One: The Millennium Approaches” premiered in 1991; “Part Two: Perestroika” premiered in 1993), it’s amazing how timeless and prophetic it seems. LEO reviewed “Part One” a couple of weeks ago. “Part Two,” reviewed here, premiered last week and will run in repertoire with “Part One” through Oct. 14.

Kushner was writing against the backdrop of what Mikhael Gorbachev, George H.W. Bush and many pundits of the time were describing as a “New World Order” that would yield an era of international peace and cooperation. Now, of course, we’re living through something else entirely — and although “Angels In America” is, by and large, a work filled infused with hope, it’s also a work that delves courageously into the cruel realities of a world where hope is, in and of itself, an act of heroism.

It’s not just critics who can get weighed down by the importance of a work like “Angels in America.” The burden can crush producers, directors and actors, as well. But the Actors Theatre of Louisville production shows no sign of that malady. I don’t see how a person would depart the theater without being provoked, inspired, appalled, delighted and disturbed by the play.

But while you’re sitting in your seats, this “Angels in America” is, from moment to moment, a delightfully-fun work of art. There’s nothing that smacks of self-consciousness or pomp. Director Meredith McDonough, her cast and the ATL technical team have created six hours of theater that pulse with energy throughout (Scenic Designer William Boles; costumes, Alison Siple; lighting design, Isabella Byrd and Paul Toben; sound, Christian Frederickson; media, Philip Allgeier; Fight Director Dale Anthony Girard; and Flight Director Brian Owens).

There is a lot of great theater in this city. But opportunities to see a major work in a production of this quality are rare, no matter where you live. And opportunities to see both parts of “Angels” with an extraordinary cast are even more rare. Both parts are running now. Take advantage.

In “Angels,” Kushner created a dramatic character based on Roy Cohn, a monstrous figure whose career arc tracked the Cold War. He figured in the McCarthy hearings, the Rosenberg trial and was an influential figure throughout his career. When he died of AIDS in 1986, it might have seemed that his legacy was closing, along with the Cold War itself. But of course, as a lawyer he represented Rupert Murdoch and served as both counsel and mentor to Donald Trump. And we now know that Cohn’s legacy is very much undead.

Kushner’s Cohn is the closest thing we have in contemporary literature to Shakespeare’s King Richard the Third. And Liberatore’s performance is amazing. It requires enormous courage for a playwright and an actor to go deeply into the soul of a monster like Cohn and bring him to life. Kushner wrote the character, and Liberatore captures Cohn’s enormous passion, greed, appetite for power and contempt for weakness in a performance that never flags. Even on his deathbed, Liberatore finds ways to show Cohn’s pulsing life force.

As memorable as Liberatore’s performance is, it is not the only one you’ll remember. This is a true ensemble production, with excellent performances throughout. Kushner himself has suggested that “Part Two” is a “comedy” — but a high-stakes comedy in which the issues revolve around life and death. And the performances run from frothy jokes (Barbara Walsh as the World’s Oldest Bolshevik in a funny bit of shtick that kicks off the action) to moments of tender irony (Walsh as Ethel Rosenberg, hoodwinked into singing a comforting melody over a seemingly unconscious Cohn) to heart-wrenching fury and desperation of Prior Walter’s struggle for life.

As Prior Walter, Mark Junek gives a fascinating performance. He is tested by his struggle with AIDS, his betrayal by former lover Louis (Richard Gallagher), his battles with a hovering angel and his encounter with heavenly bureaucrats, while a static-filled radio broadcasts news of a nuclear disaster at Chernobyl. He processes through those challenges like a contemporary Everyman, growing in strength, depth and resolve at every step.

Richard Prioleau is marvelous as Belize — a nurse whose contempt and care for Cohn culminate in a remarkable scene during which he bullies Louis into saying Kaddish over Cohn’s body while he steals Cohn’s illicit supply of AZT.

In “Part Two,” Kushner spins a web of intricate relationships — and we see the characters as they shift from one context to another. Brian Slaten gives a fluent, compelling performance as Joe Pitt — whose closeted relationship with Louis eventually comes to light, destroying his relationship with his wife, Harper (Theresa Barbato, who brings a mercurial intensity to the part) and infuriating Cohn, who has been his mentor. Barbara Walsh, mentioned above, also plays Joe’s mother Hannah, a character whose own transition is a delight to watch.

And of course, there is an Angel, played here by Rami Margron. Hers is a complex role — one that finds her wielding immense authority at one moment, while falling from her pedestal at others. And in a play where angelic metaphors stream in abundance, she gives a fine performance.