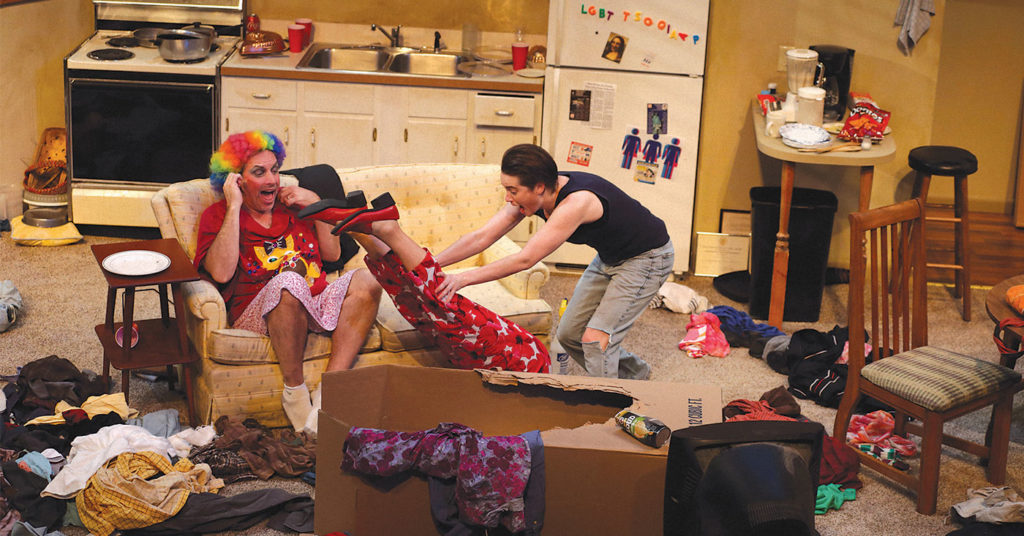 In 1996, when Tony Kushner’s Pulitzer Prize-winning play “Angels In America” premiered in Louisville in a PNC Bank Broadway Series touring production at what was then the Macauley Theatre (now the Brown), the advance press focused more on the play’s “controversial,” “frank and graphic” content than on the virtues of the play itself.

Alas, what I mostly remember about that production is the fatigue I felt at the end of the nearly four-hour performance of “Part One: Millennium Approaches,” and the feeling that the play was more successful as a work of moralizing spleen than as a work of theater. (The touring production presented “Millennium Approaches” and “Part Two: Perestroika” on alternating dates.)

Looking back, I don’t know whether my response reflected personal limitations, the quality of the production or a response to the disconnect between the advance press and the actual play

What I can say about the Actors Theatre revival of “Millennium Approaches,” which opened last week in the Pamela Brown Auditorium, is that I left the theater enthralled and invigorated by the rich language, the epic scope and prescient clarity of Kushner’s ideas and the compassionate grace that Director Meredith McDonough and cast bring to the story.

For theatergoers, the most important thing to know about this production is this: “Part One” runs through Oct. 10. “Part Two: Millennium Approaches,” runs Sept. 19-Oct. 14. Thus, from Sept. 19 through Oct. 10, both parts run in repertory — offering a rare opportunity to see both parts of this seven-hour theatrical epic over a couple of nights as a complete work of art with splendid production values created by William Boles (scenic design), Alison Siple (costumes), Isabella Byrd and Paul Toben (lights), Christian Frederickson (sound) and Dale Anthony Girard (fight director).

As Prior’s AIDS progresses, and Joe’s status is revealed, we meet hosts of vividly-realized characters (all cast members play multiple parts). Richard Prioleau is the hallucinatory guide who leads Harper through Valium-laced fantasies — and also gives a riveting performance as Prior’s friend Belize, whose outrage at Louis’s abandonment of Prior inspires a grand critique that transcends the moment. We also meet a couple of Prior’s ancestors (his family traces its lineage as far back as the “Bayeux Tapestry” in the Middle Ages) in droll depictions by Lou Liberatore and Brian Slaten.

Barbara Walsh and Rami Margron are wonderful foils for one another as Joe’s mother Hannah first deals with a Utah Realtor and then with a homeless New Yorker on a dark night.

Looming over all of this is the wickedly majestic figure of Roy Cohn. Kusher’s depiction of Cohn is very meticulously based on the historical figure — whose legal career included serving on the McCarthy hearings, assisting the prosecution of the Ethel Rosenberg trial and representing and mentoring Donald Trump.

Lou Liberatore plays Cohn with a sleek physical and verbal ferocity that calls to mind the monstrous Chimera of Greek mythology — a hybrid creature, part lion, part goat, part snake. Liberatore’s Cohn is viciously smart, viciously powerful, viciously lusty, viciously seductive. Although he’s been diagnosed with AIDS (a diagnoses he refuses to acknowledge) and is physically deteriorating before our eyes, it’s easy to believe him when he proclaims his own immortality. And in a remarkable moment, when the incapacitated Cohn is confronted by the gloating ghost of the executed Ethel Rosenberg (played by Walsh), Liberatore finds a way to hold onto the character’s dignity — and earn a measure of compassion — though most of our compassion is rightly focused on Prior’s beautifully written and portrayed journey — which culminates with the startling arrival of an Angel (flight director, Brian Owens).

Taylor Mac hasn’t yet — and may never — achieve the kind of mainstream honors that have accrued to Tony Kushner (though Mac’s “A 24-Decade History of Popular Music” was a finalist for this year’s Pulitzer in Drama).

But if you’re looking for a shockingly fresh and challenging piece of theater, Mac’s “Hir,” which opened last week in a Liminal Playhouse production should be on your agenda.

I mentioned being fatigued on first seeing “Angels.” I was exhausted after “Hir,” but for quite different reasons. The play is a dark, family farce that runs at an unflagging, breakneck speed from start to finish. There is so much constant movement in the play that Director Tony Prince could as easily be listed as choreographer. The performances are amazing, both in the individual portrayals and in the intricate clockwork of movement.

It is a loud, profane, dystopian play filled with anger, cruelty and anxiety. If there’s an occasional glimmer of sentimentality, it soon splinters into shiny bits of broken hope. And yet if you walk out of this play without feeling that your understanding of the world has been abruptly altered, you might not have been paying attention. It is, in its way, a stunning piece of theater. It’s part of a cycle that Mac calls “Dionysia Festival.” And although the wild, subversive madness of Dionysian ritual is often referenced, it’s seldom seen in the flesh.

Really. You should see this just because it is so bracingly different from anything else you’re likely to see in a theater this season. You may or may not like it, but sometimes that’s not the measure of a play’s impact. Unsettling — and terrifying — as it is, this is comedy of a high order that traces its shocking seriousness of purpose back to the most outrageous plays of ancient Greece.

Isaac Connor (Neil Brewer) returns home with a dishonorable discharge from the Marines, where he served on mortuary duty, collecting and sorting the bodies and body parts of dead soldiers. He finds a home in utter chaos. His father Arnold (Michael J. Drury) has suffered a stroke and now spends his days with his hands tucked into his diaper, fondling his penis. His mother Paige (Teresa Willis) is systematically avenging years of Arnold’s spousal and parental abuse. His sister Maxine (Megan Adair) is in the midst of gender transitioning and is now Max, with emerging facial hair and firm ideas about gender pronouns (ze for he or she; hir for his or hers).

The house (scenic design Eric Allgeier) has become a foul, disorganized pit that looks like the aftermath of a tornado (my sympathy for the stage manager, whose responsibilities include an enormous quantity of trash and clothing strewn everywhere). The chaos is enhanced by Richard McGrew’s sound design and Keith Kimmel’s lighting. •