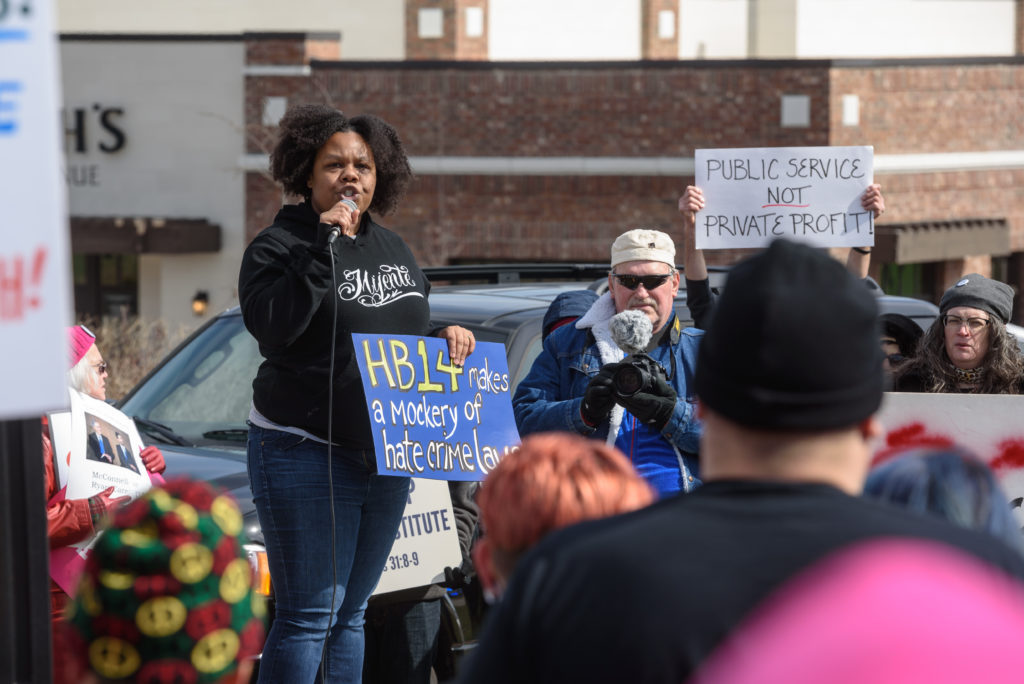 So… I wrote a list of actions. So let’s call this list The Calls to Action. I mean, I think I should be the one to give it a proper title, right? The Calls to Action, ran in LEO on Aug. 16, traversed the internet via the Alt-Right and became the most threatening list of actions for white people ever. I couldn’t believe it. The Calls to Action didn’t propose any new actions, or any new ideas. It wasn’t even the most threatening thing written on the internet this year. As I contemplated why white people were so upset by The Call to Actions, day in and day out, I began planning how I could help people understand why what I wrote in a Facebook post was nothing new at all. In actuality, The Call to Actions was long overdue.

January 1865
Most of us know that the Civil War was a war fought between the Northern and Southern states, and, over the last 152 years, we’ve learned there is no doubt it was fought over slavery. That’s cute. In a hypothetical world, I guess it would make the whitest of nation builders cognitively altruistic to unslave their property and set them “free.” After over 400-plus years, the institution of slavery built the Industrial Revolution that produced an entire economy and built the dollar without any compensation to those African people who were forced to create it.

Thus, the notion that “freed slaves” should receive 40 acres and a mule was produced via Sherman’s Special Field Orders, No. 15, in which the specific passage read: “… each family shall have a plot of not more than (40) acres of tillable ground,…” The mule was a tag-along because, of course, they would need something to till the land with (right?), but it was never a part of the original idea. Henry Louis Gates Jr. details this piece of history in The Root article “The Truth Behind ‘40 Acres and a Mule.’” What I love about non-alternative facts is that black community leaders and white accomplices came up with the idea because… wait for it… they were a part of the impacted community. [Insert pic of me with my hands underneath my chin.]

Distributing the Land
The U.S. government has always had a way with words. Even allies within the abolition movement tinkered with land redistribution (from the Gates article). Although, this idea that a reparation should be paid in land dividends isn’t a new concept, Governments have always had a play in who owns the land owns the power. Humans have been playing “FarmVille” and “SimCity” for millenniums. From Egypt to Rome, determining who could rightly live on any land ran hand in hand with who could reap the resources of the land. Introduction to poverty: the systemic intro on the mix tape of capitalism. By the time we reach the last track, we’ve created countries run by small nation-states, i.e. corporations.

Throughout time, land distributions have reformed. Within the creation of the U.S., we’ve seen these reforms change from the initial homesteading to sharecropping. What’s bewildering is that we don’t consider our current paths to homeownership and renting as somehow different than those early initiatives, respectively. What’s even more outrageous is these initiatives were afforded to only white people. Redlining, predatory mortgage rates, even home-owner’s insurance (the new redlining) indirectly affects African descendants’ opportunities with obtaining sustainable housing.

Housing Justice or Due…
The first five Calls to Action spoke to the capitalistic nature of homeownership. My audience in those first five of the Calls to Action was very clear: White people who have the means to release their property via any means. And who are these white people? I like to call this specific audience: the children and grandchildren of Anne and Carl Braden. The Bradens weren’t just allied activists — they were accomplices. An accomplice in the world of social justice is one who stands in solidarity with the impacted community, and is willing to make sacrifices that risk their non-impacted life. One of the Bradens’ largest sacrifices was buying a home for a black family because black people weren’t allowed to purchase housing outside of “black” neighborhoods. The Bradens were charged with sedition. Google it. This means the act of buying a house for a black family was synonymous with terrorism.

Generational Poverty
That is the explanation for how during the last two centuries the U.S. has moved housing away from a human right into a novelty; a novelty that millions of Americans don’t even know exists. This was the purpose of the first five Calls to Action around leaving property to those who live in generational poverty — something that clearly several people missed. African descendants of enslavement and descendants of indigenous folk have a right to the land that their ancestors tilled. That tilling was produced with not only blood, sweat and tears — it includes our ancestors’ teeth that were pulled for speaking their native tongue. The soil includes their bones in unmarked graves, sometimes the same soil where some of you grow your organic heirloom tomatoes.

With the response that my Calls to Action received, it was evident that most white people thought they owned generational poverty; these are the symptoms of settler colonialism. Generational poverty is systemic. Poverty is caused, and by systemic, I mean a cycle of poverty that most black or brown families have never not known. When the posts and comments of “Get a job” and “Work hard, and you’ll earn your own property” emerged, my only response was “How much harder?”

To be clear, if a corporation researched and produced findings that they lost money or stock, you can be sure they would take some legal method to getting its funds.

I mean how do yaw think these monarchs stay wealthy? •