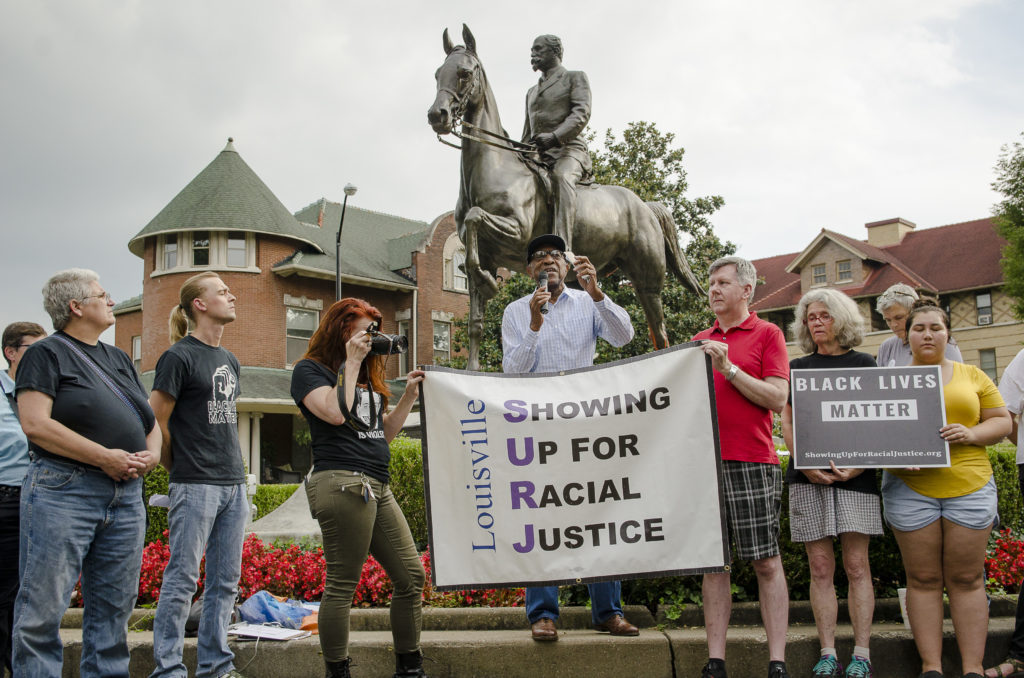 Bob Cunningham speaking in front of the Castleman Statue.

Protesters rallied Monday in front of the John B. Castleman Statue on Cherokee Road in The Highlands to encourage the city to remove this monument to a Confederate military officer.

Organized by SURJ Louisville, the hour-long rally included chants, songs and speakers in front of the statue, which recently was vandalized with splatters of orange paint. They called on Mayor Greg Fischer to support taking down the tribute to Castleman, a Confederate officer and guerrilla fighter during the Civil War. Castleman was imprisoned and exiled by the Union, before being later pardoned, eventually joining the U.S. military and then serving as Louisville’s commissioner of the board of parks.

The protesters also left a voicemail for the mayor to add pressure to Fischer’s recent promise that the city would undertake a review of all public art “that can be interpreted to be honoring bigotry, racism and/or slavery.”

“This made me so proud of Louisville,” said speaker Bob Cunningham. “I say that because there are times that we feel like we are alone, but when we see allies like this — young, old, white, black, rich, poor, gay, straight, everybody is here — it shows us that there are good folk and when you get to my age you wonder, ‘hey, Why am I doing this?’ But when I see this, it gives me strength and I think we get strength from one another.”