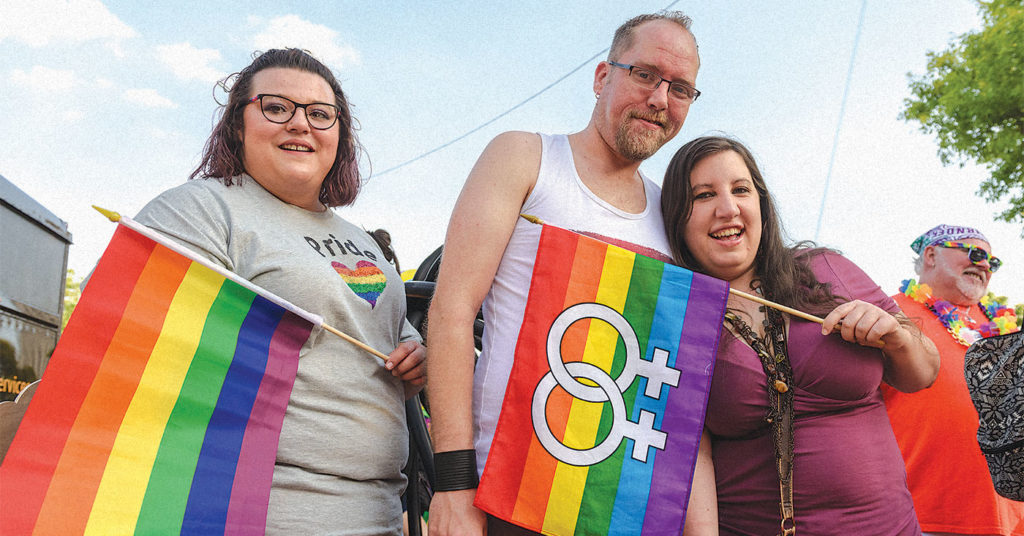 Aimee Nieto, Shawn Mason and Lindsey Doyle on the Tryangles and Teddy Bear trailer before the paradePhoto by Brian Bohannon

For more than a decade, the Kentuckiana Pride Festival has grown continually each year, showing and reinforcing the unity of the region’s LGBTQ community. In recent years, the U.S. Supreme Court ruling on marriage equality and the Pulse nightclub massacre, have inserted into the festivities more pointed messages for attendees. For instance, during the 17th Pride Festival Parade, the Fairness Campaign participants donned black balloons and marched under a banner declaring “Resist. Persist.” With the goal of looking forward and backward at the Pride Festival, we spoke with Pride President Rodney Coffman about the future and the event’s evolution.

MODERN: How do you think this year’s Kentuckiana Pride Festival, Parade and Concert went? How was attendance and the general vibe of the event?
Rodney Coffman: The vibe was one of unity and support. That showed in our attendance, which was up over last year.

What was your favorite moment of this year’s weekend?
There are several proud moments. However, the one that sticks out to me was when a lesbian mom reached out to me about her young, autistic daughter, who gets bullied because of her condition and having two moms. Her daughter is a huge Keri Hilson fan. Mom had asked if I could get Keri [who performed] to give a shout to her daughter. Obviously, we can ask, but can’t guarantee. I knew the one thing I could guarantee was getting her closer to possibly meeting her by giving the family VIP status with a chance to join the meet and greet. In doing so, this precious little girl not only got her shout-out, she got to meet and have her picture taken with Keri. Keri also brought her on stage. Kindness and love will always win.

Compared to last year, which came in the wake of Pulse, how do you feel this year was different?
Last year came with many emotions because it was less than a week after the horrific Pulse tragedy. This year still had many emotions, but fear or feeling lost wasn’t one of them. There was a feeling of unity and celebration. We won’t forget, we will only get stronger!

With Fairness Campaign donning all black balloons, for example, what kind of statement do you think KPF makes about Louisville, given the country’s current political climate?
I want to believe and hope that we are able to make everyone feel they are welcome to be who they are, no matter what is going on. I was interviewed and quoted in a past issue of Rolling Stone article for the same type of question. Simply be you. Be proud of you. We will stand together and resist.

How did this year build on the already staggering legacy of KPF?
Every year we try new things to see what works and what doesn’t. This year was no different. We had a total of three stages, with one strictly focused on local entertainment. This was a big a hit with the community. We expanded the number of booths and children’s area.

Have the gears started turning for next year? Anything big in store?
Our gears are already turning. I personally, along with other board members, visit other Prides to see how we can learn from them by sharing ideas with each other. At this time I can’t make any official statements, but keep watching our social media pages and our new website.

How can people stay engaged with KPF year round?
We are always looking for fresh new faces with new fun ideas. They can interact with us via social media, email, and coming to one of our bi-monthly meetings.