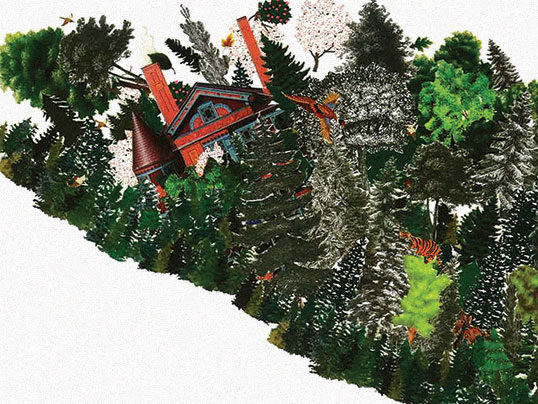 ‘The Artist as Culture Producer: Living and Sustaining a Creative Life’
Edited by Sharon Louden (Intellect and The University of Chicago Press; 402 pgs., $42)

How do you live a creative life when there is little monetary incentive for doing so? For painter Matthew Deleget, it came down to whether he could get health insurance.

He said he paints and works in a gallery “at least 40 hours a week, usually more,” but with “nowhere near a regular, let alone full-time salary with benefits. I will add that one terrific benefit to me was the Affordable Care Act, which continues to give me access to good, relatively inexpensive health insurance.”

Deleget is one of the artists in “The Artist as Culture Producer: Living and Sustaining a Creative Life,” edited by artist/educator Sharon Louden. The book contains essays by 40 contemporary artists. While not a step-by-step guide on how to be a visual artist, there are plenty of tips that can be gleaned from these creatives’ experiences, such as healthcare and other economic realities.

The focus is on a life well lived, not just how to make art. “For me, the artist as culture producer is someone who reaches outside of the studio to extend creative energies and pursuits into his or her community,” Louden said. To be included in this book, the artists needed to “exude a spirit of generosity.”

Loudon admires multimedia artist Wendy Red Star, a Crow from Montana, who has incorporated her Native-American culture into her art. When she was in graduate school at the University of California, Los Angeles, Red Star was the only American-Indian artist there who referenced native culture. She did so with humor. “People will often ask me why I choose humor for sensitive topics, such as the portrayal of native peoples in popular culture,” she said. “Humor is healing, healing is power and power overcomes obstacles.” She has addressed the lack of representation and inclusion for native artists by curating art exhibitions, stating that aiding “other indigenous artists through opportunities that have been granted to me has been immensely fulfilling.”

Jean Shin has exhibited her installations at New York’s Museum of Modern Art and the Smithsonian American Art Museum in Washington, D.C. By art standards, she’s “made it.” Yet she now believes her public art is the most personally satisfying. “I find a great sense of purpose knowing that I am contributing to the experience of art as part of people’s everyday life,” said Shin. “My public artworks will be on view for generations of people who rarely visit museums or buy art. In my early years, I thought that my life experiences shaped my art. However, more recently, I believe it goes the other way around: art shapes life.”

This is Loudon’s second book in the “Living and Sustaining a Creative Life” series. The first, “Essays by 40 Working Artists,” was published in 2013. The third book is “Last Artist Standing” which is scheduled to be published in 2020.

The 21c Museum Hotel Louisville is a local proponent of “The Artist as Culture Producer,” with the book available for purchase there. While there are no local artists in the publication, it dovetails nicely with their focus on international 21st-century artists.