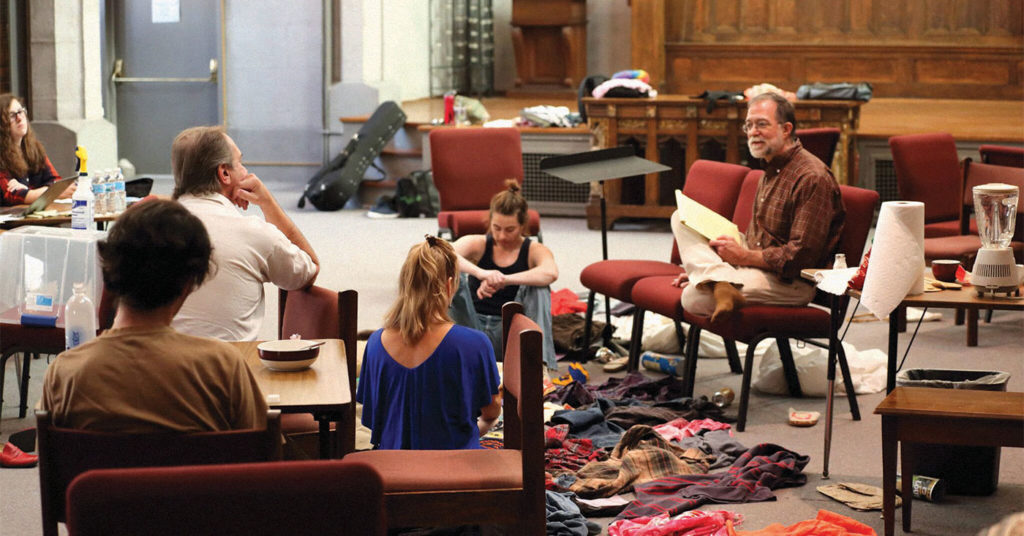 When Tony Prince and Richard McGrew decided in 2014 to form a new theater company — now known as The Liminal Playhouse — they asked business and theater professionals for advice on how to make it work.

Their advisers would ask questions, Prince recalled. “And we had all the wrong answers. They’d ask ‘Who is your target audience?’ and we’d say, ‘We don’t know them yet. Whoever likes this stuff.’”

Three years later, what a business consultant might have deemed a ridiculously speculative venture has developed into a well-regarded theater company. Liminal Playhouse productions consistently earn high critical acclaim. The audience base (and all-important subscriber list) has grown consistently. And as its third season begins, Liminal is joining Bunbury Theatre and Pandora Productions as a resident company at the Henry Clay Theatre, one of the city’s premium theatrical venues.

Prince (the company’s artistic director) and McGrew (producer) have been partners for a couple of decades and married in 2016. They may not have had a clear vision of their audience demographics, but in a recent joint interview, it was evident that they share a well-defined vision — though one that on its face seems pretty risky.

They have complementary backgrounds. Prince holds degrees from Indiana University Bloomington and UofL. He led the Atherton High School theater program for nearly a decade (and has taught there for some 20 years). McGrew, now retired from UPS, holds degrees in music, computer science and linguistics (and has a strong interest in music composition).

Prince has deep roots in Louisville theater, dating back to the earliest days of Bunbury. As an actor and director his resume includes abundant activities with companies such as Necessary Theatre and the Savage Rose Classical Theatre Company.

McGrew says he’s “a theater person by osmosis.” “If someone had told me in high school that I’d be a theater producer, I’d have laughed, but now it seems that everything I’ve done has been preparation for this.” For three productions, he has designed sound, composed scores and stage managed. He appeared on stage (playing cello) in the company’s production of Sarah Ruhl’s “Melancholy Play.” He designed the company’s quirky logo (a haunting, subtle image that looks like a pair of off-balanced, almond shaped eyes) and handles public relations and business.

Back to that vision.

Prince said that in thinking about his theater career and academic interests, he realized that his adult interests had their roots in his childhood preoccupations. “I’ve always been interested in gray areas,” he said.

Stories that involve transformational zones and processes — places of liminality — have always fascinated him, he continued. “As a child I was always interested in monsters and monstrosity. Monsters are disturbing to us because they’re examples of transformation — they’re simultaneously two things at once. The Wolf Man is both wolf and man. A vampire is both living and dead.”

As Prince reflected, he discerned cultural and political parallels to the anxieties provoked by monstrous transformation. “I became preoccupied with the idea that we’ve become very binary in our thinking, very polarized and divided. I started wondering why we find it so hard to find common areas of humanity — and I wanted use theater to tell stories that explore those gray areas.”

At first, even though they shared a conviction that “Liminal” was the right name for the company, Prince and McGrew were concerned about using an admitted obscure name. So for balance, they coupled it with “Playhouse.”

“I’ve never really been fond of using the name playhouse for a theater,” said Prince. “But we thought there was a danger that ‘liminal’ might seem pretentious — and we wanted to convey the sense that this is a playful endeavor, so Liminal Playhouse seemed right.”

From McGrew’s vantage, the name has come to be a boon. “People ask all the time what it means,” he said. “And that gives us a chance to talk to them about what we’re doing. It actually has helped us build relationships.”

The other thing that’s helped them build relationships — and audiences — is the high quality of the programming and of the productions. From the beginning, the company focused on high production values, using some of the city’s best technical theater people, such as scenic designer Eric Allgeier and lighting designer Keith Kimmel. And because of Prince’s extensive connections in Louisville theater, he’s been able to attract top-notch casts.

Over the company’s first two seasons (and through the upcoming third season), every production has been a Louisville premier. The scripts have been both topical and timeless.

And based on the productions LEO Weekly has reviewed, they’ve been intrinsically entertaining. Prince said, “I like things that are intensely emotional but give you a lot to think about and even be troubled by.”

He described the quintessential Liminal production as “a comedy with serious intent.” And he went on to say, “I can’t imagine choosing a play that isn’t funny in some way. But I like theater that roils your emotions so you don’t know what you’re going to experience next, where you’re knocked around. I like full spectrum emotional involvement, including feelings of discomfort. It would be very disappointing to me if people left the theater after a show and didn’t have anything to talk about.”

From the beginning, Prince and McGrew recognized the risk that what they were doing might not find its audience.

At the start, McGrew said, they agreed on a five-year plan. “We hoped that people would appreciate it and would respond,” he said. “But what we focused on was the idea that for five years we were going to make great theater, and then assess where we were. If we didn’t find an audience, we promised each other that we’d at least go out with a bang for our final production.”

At this point that seems an unlikely scenario. The company opens its season this week and the lineup is exciting. First up is “Hir,” by Taylor Mac (listed by The New York Times as one of the top-10 plays of 2015). In October comes the Pulitzer- and Tony-winning “Clybourne Park” by Bruce Norris. Spring brings Laura Eason’s wildly popular “Sex With Strangers.” And the season ends with something we see far too little of in the U.S., a contemporary British play: “The Fastest Clock in the Universe” by Philip Ridley.