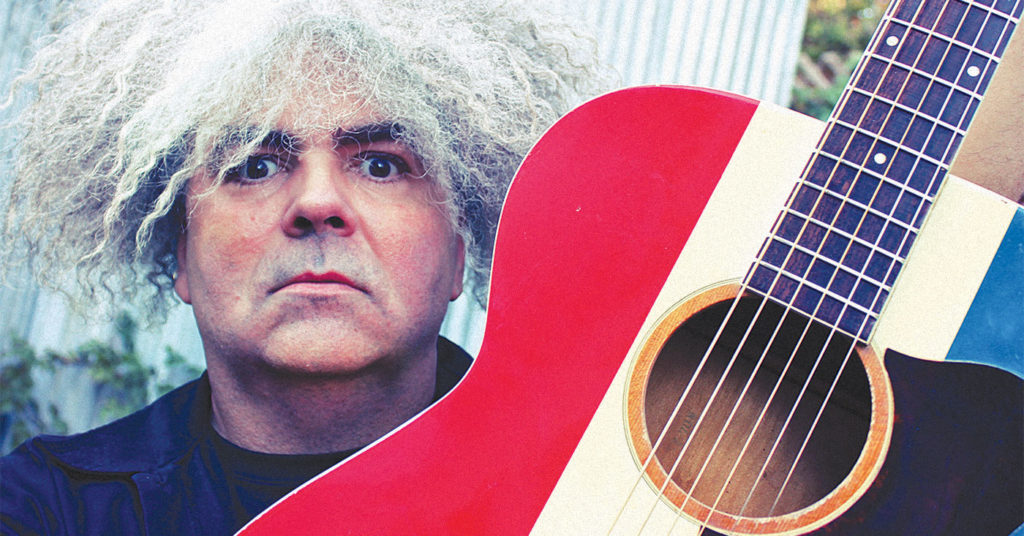 King Buzzo of The MelvinsPhoto by Mackie Osborne

It’s no small feat digging into the Melvins’ catalog, which spans more than three decades, with a staggering amount of releases. Led by the irascible King Buzzo and Dale Crover, the duo has collaborated with a who’s who of musicians over their storied career, influencing Nirvana to Tool, and plenty in between. Their newest record, A Walk With Love & Death, is a double record that features metal masterpieces, sonic collages and psychedelic doo-wop resulting in an absolute head trip. King Buzzo (aka Buzz Osbourne) spoke with us about staying sharp, punk rock and the corporate machine.

On how they stay fresh after so many albums.

King Buzzo: It’s not too hard if you’re willing to take chances. I don’t spend a lot of time contemplating the past — we’re much more of a what-have-you-done-lately kind of band. When we first started making records, it was 30 years ago. We really don’t have to make an album. We’ve had people say that we just make records to tour. We have 20 records. We don’t have to make new records. I make records because I feel like it. I feel it’s part of the job. This is what I do. The whole idea that there is something else going on there is crazy to me. It means nothing. I don’t need to do anything. I don’t get paid for the vast majority of music that I make. I don’t get paid for that. I get paid for a small amount of time that I make music. You spend a lot of time not making any money. There is something there that does keep you moving forward. Without all that time spent not making money, you’re not going to get to the times where you are making money.

On why A Walk With Love & Death is a double record.

We pretty much put out everything we recorded. We felt like we had enough stuff and it was well rounded. It’s a double album because it’s a lot of material, and each record is completely different from the other one. It’s a big, massive project. Some people will have a problem with it, but someone will not have a problem with it. I just do what I do, and if some people like it, good. I’m a happy guy. If they don’t, I’m a happy guy too. I’m not going to take a poll. That’s not going to work. I have very little trappings for any of it. That’s what attracted me to punk rock stuff to begin with. But what is it today? Punk rock is just another channel on TV. You have bands like Green Day playing stadiums and proclaiming themselves to be punk.

On The Dickies making news for their Warped Tour antics.

That’s where this whole thing has gone to this PC horse-shit world. You don’t get to say it’s not OK. If we’re all equal, I don’t turn into Sir Walter Raleigh when you call me something. It’s sort of like, if you’re going to rob a bank with an AK-47, and you walk through the front door, to me, you laid down your civil rights when you walk through the front door. You’ve lost your right. If you play with fire, you get burned.

I would not do well, if someone showed up at my concert. Fuck all that. That’s what punk rock is. It’s establishment crap. We don’t even need the [Parents Music Resource Center] anymore, these people are going to do it for them. That’s not punk rock, it’s just a bunch of bullshit.

I’m sick and tired of this PC shit. Grow a pair. That’s all just accepted. You can march, you can protest. Especially the punk rockers — they can’t even pick up a good band. First, you’re on the Warped Tour. Shove all that mall-style punk-rock right up your ass. I can get the same service at K-Mart. Fuck all that. I would have more enjoyment going to a Brittney Spears concert than that fucking thing. At least it would be entertaining. I’ve always thought that.

Who is our brother band? We don’t have a model we’re going after. We operate that we’re doing something different, that we don’t participate in any little club. I don’t take criticism well. You can kiss my ass, if that’s what you want to do. I don’t give a rat’s ass what you think, and it has served me well. I operate in a way that I would like to have other bands operate. There is no model for what we’re doing. We’re on our own and that’s fine by me. No one is taking care of us, no one is paying the bills. It’s like Joe Perry said: Let the music do the talking.

On what they attribute their longevity?

Having vision and being completely fearless. I have the ability to wait you out and win. I’ve done it before. All you have to do is wait. You know. If you do that, you will win, and they will fear you. There is no question of that. It will work. We never quit. We’ve never taken any time off.