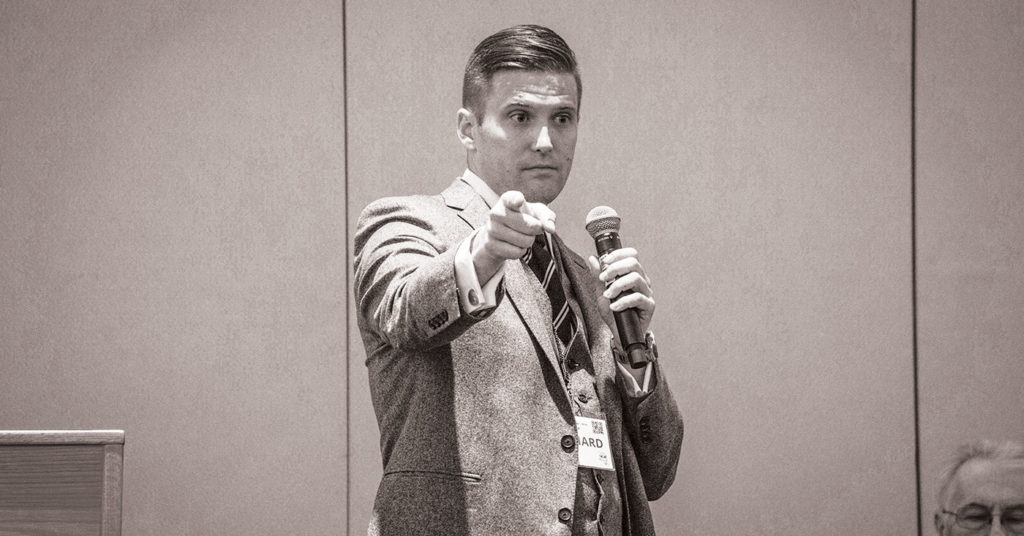 [Ed. note: The following ran in C-VILLE Weekly in Charlottesville as a primer on protests there, and it includes Matthew Heimbach, a local white-supremacist infamous for his attack at a Donald Trump rally here last year.]

First the Loyal White Knights of the KKK on July 8 and now the Unite the Right rally Aug.12. Charlottesville has become quite the magnet for white nationalists since City Council voted in April to remove a statue of Gen. Robert E. Lee and rename two Confederate general-monikered parks. Oh, and the mayor declared the city the capital of the resistance.

But how does the alt-right differ from the KKK?

We went to the Daily Stormer, the neo-Nazi website where Andrew Anglin published a handy guide to the alt-right and the new white nationalists.

The core concept is that “whites are undergoing an extermination, via mass immigration into white countries which was enabled by a corrosive liberal ideology of white self-hatred, and that the Jews are at the center of this agenda,” writes Anglin.

So, like the Klan, the alt-white nationalists are still racist, dreaming of deporting all people of color, still anti-Semitic and anti-nonwhite immigrant, still homophobic and still loathe feminists and liberals. But this new breed is young and spends a lot of time hanging out online.

Trolling is a popular activity, as are making memes and doing things for the lulz, because there’s “a spirit of fun,” according to Anglin.

“The mob is the movement,” he writes. This hive mentality is buzzing in dark corners of the internet like Reddit and 4chan, where “the rehabilitation of Adolf Hitler and the [National Socialist German Workers’ Party] largely took place,” according to Anglin.

Here’s who was on the bill to speak at homegrown whites-righter Jason Kessler’s Aug. 12 march on Charlottesville, where he gave himself third billing in the all-star, alt-right lineup.

Claim to fame: President of the National Policy Institute and Washington Summit Publishers, who coined the term “alt-right” and calls for a “peaceful ethnic cleansing”

Hates most: Any color except white

Major press moments: Spencer was punched in the face in the middle of an on-camera interview during the Women’s March and also had his Alexandria, Virginia, gym membership terminated for being the cause of a scene in which a woman called him a Nazi.

Slogan: “We will not be replaced.”

Claim to fame: A co-founder of the Traditionalist Worker Party, Holocaust denier and often considered to be the face of a new generation of white nationalists

Also known for: Co-chairing the Nationalist Front — an umbrella organization of about 20 white supremacist groups, including skinhead, KKK and neo-Nazi groups — alongside National Socialist Movement leader Jeff Schoep, according to the Anti-Defamation League.

Rap sheet: Sentenced to 90 days in jail in July for a disorderly conduct charge he got for allegedly screaming and yelling at Kashiya Nwanguma and repeatedly pushing her at a Trump rally in Louisville in 2016. His sentence was suspended.

Quote: “We are not separate peoples fighting alone. We are all comrades in the struggle against International Jewry and the Zionist State,” from a Traditionalist Youth Network gathering in August 2014, according to the Southern Poverty Law Center.

Signature move: The Heimbach maneuver. We’re not exactly sure what that is, but Backsass! blogger Connie Chastain Ward was pretty fired up about it.

Banned from: GoFundMe for fundraising his trip to Charlottesville for Unite the Right

Major press moments: An alleged disinvitation to the alt-right’s DeploraBall to celebrate the president’s inauguration, for — believe it or not — bringing too much bad PR to the movement’s alt-lite sector, which disapproved of Gionet’s Nazi salutes and anti-Semitic blasts on Twitter, according to Mashable. Though he missed the ball, he eventually got back in the party’s good graces by deleting his offensive tweets and saying he misspoke.

Claim to fame: Host of Radical Agenda, a right-wing radio show with episodes carrying titles such as “Defending Whiteness,” “School Sucks,” “Hating Cops Is Immature” and “Shut Up, Cancer Boy,” the latter a reference to U.S. Sen. John McCain

History of: Promoting anti-police and anarchist rhetoric, according to the Anti-Defamation League, but recently moved toward the extreme right. He traded in libertarianism for the alt-right because the latter “has better memes.”

Fans say: He refuses to go anywhere he can’t carry a gun.

He says: He will be armed at Unite the Right, as will many of the event’s attendees, because,“communists have a really nasty habit of trying to make things violent and we should try really hard to avoid that because that would result in dead people,” he tells C-VILLE.

Hates most: The left “with every ounce of my being.” And members of the free press, whom he calls “lying pieces of filth” in his episode titled “Promoting Violence.”

Claims rally misconceptions: “The point of it is not hate and the fact that everybody just runs to that understandably makes us angry and so we end up giving them the ammunition to call it that. …If we are going to save our goddamn country, we are going to have to work together to defeat the left and if you will not do that, then we are going to have a really serious problem.”

Aka: Based Stickman, the Alt-Knight

Claim to fame: Busting heads at the Berkeley riot in March

Will he show? Kessler said yes a couple of months ago, but he refused to confirm attendance.

Merch: The Official Battle for Berkeley hoodie for $39.99

Claim to fame: Fired from his job as chief technology officer at Business Insider for offensive tweets in 2013. Earlier this year, he split with his WeSearchr partner and internet troll Chuck C. Johnson

Day job: Runs Counter.Fund, a crowdfunding site for the alt-right and a parallel economy

Soul mate org: Hezbollah, which he extols in Inc.

Precautions: While Dickinson is prepared to speak before the thousands anticipated at the Unite the Right rally, he won’t speak to a reporter on the phone because “it’s just not safe,” he writes in an email.

Claim to fame: Founder of the alt-right media hub The Right Stuff and podcast “The Daily Shoah,” and one of the first to use the term “cuckservative”

Major press moments: He was doxxed by leftists who revealed his marriage to a Jewish woman in January. Richard Spencer and former KKK leader David Duke stood by him as he suffered major backlash from his party and “Daily Shoah” co-host “Bulbasaur,” who allegedly tweeted that Peinovich belonged in a gas chamber before deleting his account. It appears from online reports that Peinovich and his wife have cut ties.

Banned from: Australia, where politicians have argued that he should not be allowed in their country.

Reason for attending Unite the Right: “Why not?”

Claim to fame: Heads the League of the South (a neo-Confederate group), which critics have dubbed LOSers.

Bigger than the “black problem in the South,” according to Hill: The “Jewry” problem

Protégé: Matt Heimbach, whom he expelled from LOS for performing a Nazi salute at neo-Nazi and KKK events but welcomed back into the fold less than a year later, according to Southern Poverty Law Center. Then Heimbach left to start the Traditionalist Worker Party.

Signature meme: The triple-parenthesis echo to denote (((they))) are Jews.

Unite the Right accessory: White shields with the League of the South flag

Claim to fame: Publisher of The Revolutionary Conservative, Republican politician and former candidate for the Libertarian nomination for the Florida Senate in 2016, member of the Fraternal Order of the Alt-Knights, a “military wing” of the Proud Boys and the sergeant at arms for white supremacist group the Florida American Guard

Major press moment: Adrian Wyllie, former chair of the Libertarian Party of Florida, resigned from his position in response to Invictus’ campaign, calling him a “violent fascist and neo-Nazi,” and a champion of eugenics who “sadistically dismember[ed] a goat in a ritualistic sacrifice,” according to Politico. Invictus said he did sacrifice the animal and drink its blood during a pagan ritual in 2013, but he denies supporting eugenics.

Quoted: From a letter he wrote in 2013 cited on multiple alt-right websites: “I have prophesied for years that I was born for a Great War; that if I did not witness the coming of the Second American Civil War I would begin it myself. Mark well: That day is fast coming upon you. On the New Moon of May, I shall disappear into the Wilderness. I will return bearing Revolution, or I will not return at all.”

Claim to fame: Exposed African-American Vice-Mayor Wes Bellamy’s years-old racist and misogynistic tweets and attempted to remove him from office, which launched Kessler into alt-white firmament.

Organization: Unity and Security in America

Rap sheet: Convicted of assault for slugging Jay Taylor in January on the Downtown Mall while collecting remove-Bellamy-from-office-petition signatures and is on probation; filed a counterclaim against Taylor that the prosecutor said video evidence did not support; and is currently facing disorderly conduct charges from the counterprotest to the May 13 tiki-torch rally with Spencer.

Best video moment: Kessler does a cereal beat-in, part of the initiation for the alt-lite Proud Boys (who insist they’re not white supremacists) in which he affirms he’s a “proud western chauvinist” and is then pummeled until he can list five breakfast cereals.

Best press moment: Kessler calls himself a journalist and covers the Spencer-led rally for the Daily Caller without informing the website he was also a speaker at the pre-torch festivities.

Quote: “Lincoln was a traitor. The entire country would be better off if the South had won the Civil War,” says Kessler at the June 25 alt-right rally in Washington, D.C.

Claim to fame: Heads podcasts “Paranormies Present” and “The Current Year Tonight,” which are promoted on The Right Stuff, the media hub of fellow alt-righter and Unite the Right speaker Mike Enoch

Another word for National Socialism: Nazism

Membership requirements: Must be at least 80 percent white or of European heritage, and if you’re gay, transsexual or an adulterer, forget about getting an invitation to join.

Identity Evropa: “American-based identitarian organization dedicated to promoting the interests of people of European heritage,” according to its Facebook page

Symbol: The dragon eye, apparently a hot commodity, because stickers depicting it are sold out on the group’s website.

Others you should be looking for include Gavin McInnes, founder of the Proud Boys who claims to be inclusive to all — “as long as you accept the Western world as the best” — and other members of the alt-lite, a group that distances itself from its hardcore counterpart. Then, there are members of the Warlocks Motorcycle Club, the historically violent biker gang that stood behind Jason Kessler in leather vests and doo rags at his at his July 11 press conference. And South Carolina members of the Patriot movement, originally scheduled a companion rally in Darden Towe Park for the same day, but they pulled their support and canceled the event once organizer Chevy Love realized the alt-right supports racism. •