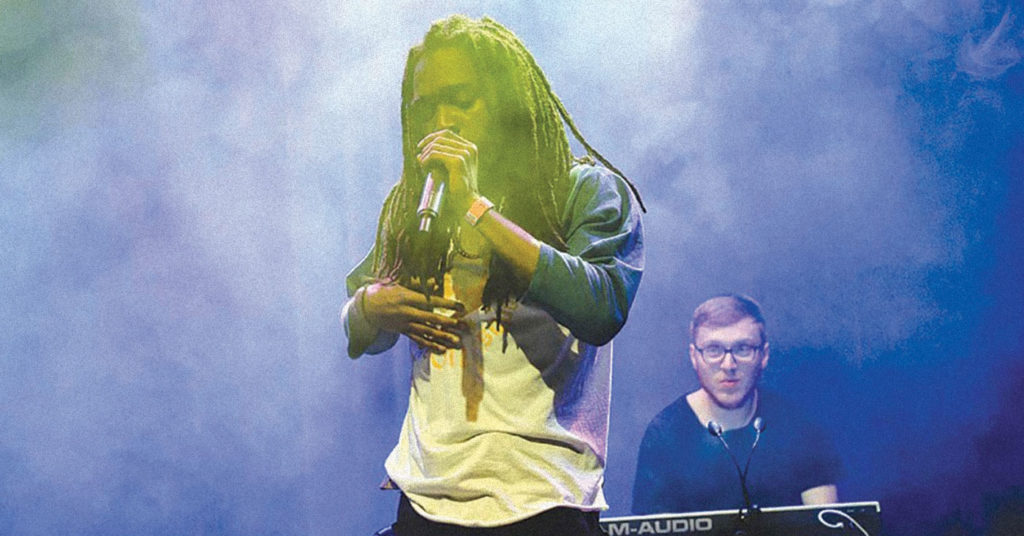 Jordan Jetson (left) and Nick B performingPhoto by Nik Vechery

Parenthood is difficult, a lesson that rapper Jordan Jetson became all too acquainted with after the birth of his twins. It took a toll on Jetson, who went through a breakup, which was relatively amicable, but no less a struggle. And it’s that journey through the challenging times, and figuring out how to navigate the future, that impacted Jetson’s work on Critical Mass, his latest full-length album.

Initially, he plotted a standard deep dive into hip-hop heroics, the kind of braggadocio that you come to expect with the genre, but after things changed in his personal life, it just wasn’t the same.

“I didn’t feel that bravado going on,” Jetson said. “I don’t have any hard feelings over her. Before we had kids, it seems like we had a better idea of what we wanted to do. For whatever reason, we weren’t ready yet. I can take care of one kid. I thought, ‘I’m good with kids.’ Boom, twins.”

The album is dualistic in nature. Jetson asked his team of producers, Nick B and Yons, to send him sad tracks, which they did. After five songs, he felt that he’d exorcised his demons, at least for the time being, and looked for material that stepped out into the sun.

“Once I got four or five sad songs, I felt like that was the right way to go,” Jetson said. “I was able to use that to pull myself out of the depression. That’s why the album is 50/50.”

Still, he faced a crisis in putting his heartbreak out for public consumption.

“Through the whole thing, I was like ‘Am I being overly dramatic?’” Jetson said. “People have stepped on a mine in the Middle East, and here I am moping over a break up. It changes everything. You can’t listen to songs the same, you can’t even hang with people the same. It was just the having to pull myself out of that. I could still be there, easily. I still get sad all the time. I can’t let myself stay there. I’m here with you, instead of moping on a couch. I have to focus on my progression instead of something that’s stagnant.”

Jetson first started working with producer Nick B back in 2014 through their mutual connections with the hip-hop collective The Legion of Doom. From there, Jetson was introduced to Yons, the producer/emcee formerly known as Eons D. The two developed a dynamic working relationship with Jetson, through collaborations both live and in the studio.

“Our very first show together was at the Mercury Ballroom in 2015,” Yons recalled. “We had no real material together, I was hella nervous, I hadn’t really performed for a while in front of a large crowd and we just came out and put everything out there. I remember Jets hopping off stage and going in the crowd. It was fun. We shared the same type of passion. It was that moment I knew we had to at least do one project together.”

For both producers, that relationship proved to be reciprocal — through their collaboration with Jetson, both Yons and Nick B feel like they upped their game.

“Jetson is a real emcee in every sense of the word,” Yons said. “He comes prepared to sessions and knocks songs out, many times in one take. He doesn’t really like to punch in if he messes up, so he’ll be like 25 bars into a long-ass verse and start all the way over. But it’s good practice as he never has trouble memorizing lines for shows, which is such an underrated aspect of the craft that other genres can’t really compare to.”

“Once it came down to my part, producing, he really let me just work,” Nick B added. “This project was very different in that he already had all of his lyrics written. I had to match the instrumentals to his vocals. That was definitely influential in how I worked. I had a clear direction for each song as opposed to starting from scratch.”

For Jetson, the feeling is mutual: “They get me. They know what I like. They pick up on what I feel. And they know what it is that I don’t like.”

Jetson is still working to find that balance between art and parenthood every day. “I just make space wherever I can,” he said. “Music is important to me. I don’t see me working a job for the rest of my life. I have to find the time. Even if it means bouncing a kid on one knee.” •