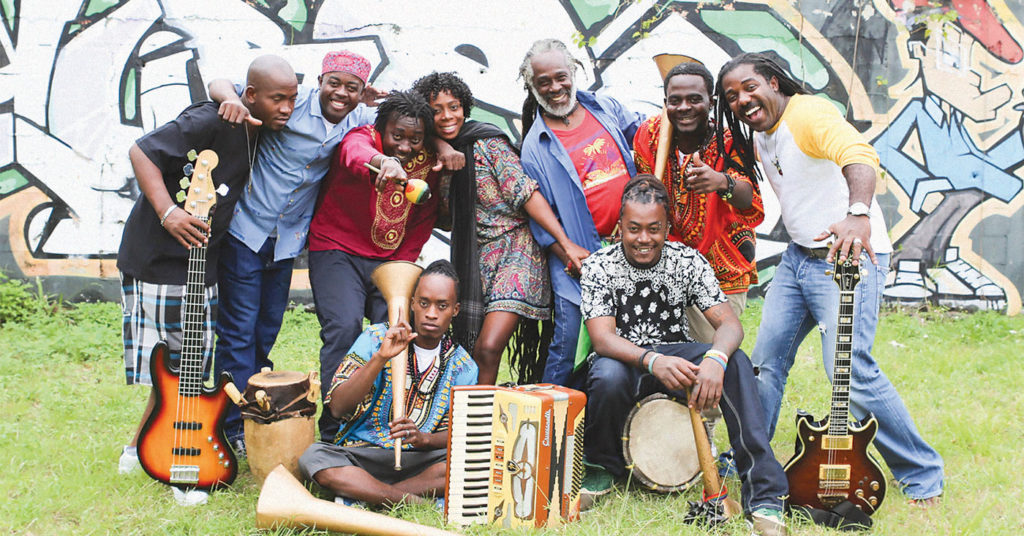 On the title track of Lakou Mizik’s debut album, Wa Di Yo, the nine-piece weaves a positive, resilient energy into those words, reflecting the band’s mission of helping Haiti heal after the 2010 earthquake.

“The idea was there at the beginning,” said guitarist and lead singer Steeve Valcourt. “When you finish listening to the album, and you understand the concept of Haitian culture, you will be able to go and tell them what is Haitian culture.”

On the album, Lakou Mizik represents Haitian roots and Vodou music while bringing the country’s French-Caribbean and African influences into the mix. It’s a touchstone for international listeners, in addition to emboldening young Haitians to find a voice in music and connect with their ancestral traditions. Lakou embarked on its second North American tour in the spring. The final show on this leg is in Louisville for the soundtrack release of the documentary Distant Conversation. The film tells Lakou’s story, with music contributions from Louisville artists Kevin Ratterman and Scott Carney. Carney, of Wax Fang, will also open the evening with a solo performance. But first, LEO talked to Valcourt and band manager Zach Niles to gain more insight on Wa Di Yo.

On Jan. 12, 2010, a devastating earthquake in Haiti struck the coastal commune Léogâne and surrounding regions, including the nation’s capitol Port-au-Prince. Singer Jonas Attis and Valcourt were recording in the latter’s Port-au-Prince basement studio (Boulo Studios, named after his father and famed Haitian jazz artist, Boulo Valcourt) when the earthquake hit.

“It felt like it was a big truck passing by that moves the house, but when it started to get bigger, I was like ‘Nope, nope. That’s not a truck,’” Valcourt said. “We had to run outside, and that’s when I realized that everything just crashed down. It was really a catastrophe. We weren’t prepared for something like that. I don’t think nobody was.”

Following the devastation that took more than 100,000 lives and caused severe, lasting damage, Valcourt and Attis wanted to use music to help those displaced by the tragedy.

“There was no joy and no life,” Valcourt said. “We all thought it was the end of the world at some point.”

The two musicians decided to set off on tour between the region’s refugee camps. Wielding a guitar and conga drum, they were on a mission to inject positivity across the land, entertaining the mixture of generations that coexisted at the camps.

“Church people, old people, new generations, kids, hip-hop guys,” Valcourt said. “They are all together and you don’t know which style of songs to play.”

As it turns out, mixing old with new had the highest potential to please everyone, and that was also an influential stage from which Lakou Mizik, a collective of multiple generations of musicians, would emerge.

American filmmaker Zach Niles was in Haiti around this time and visited Boulo Studios, arriving as of fan of Valcourt’s father and also with a vision in mind: to shine a light on Haitian music and culture. But Valcourt and Attis were already kind of on to that, so both sides agreed, Niles would manage and Valcourt and Attis would assemble the rest of the band. They recorded the first song in the same basement studio, a voodoo-blues tune “Peze Kafe.”

Niles’ previous project with the Sierra Leone Refugee All-Stars was a similar exchange. In the 2005 documentary film he directed and produced with Banker White, the two filmmakers followed a small band from Freetown, traveling and playing music in refugee camps across Guinea, where many fled to escape the escalation of Sierra Leone’s decade-long civil war. The All-Stars gained enough exposure after the film’s release to tour internationally and continue producing albums.

“Music and stories of musicians can help people connect to places and with people in a more positive and more human way than what people normally learn through various news cycles,” Niles said. “Haiti has a long history of having negative imagery, between just starting with Vodou and going through the AIDS epidemic, and political struggles. And then the earthquake, followed by cholera. It’s a place that has suffered.”

“For me, it’s really a concept of trying to create empathy, as opposed to sympathy,” he added. “That’s kind of one of my mottos. Empathy is a way to connect people as opposed to feeling sorry for people, which creates a division — it creates a wall in some ways. It’s that, and I just love the music.”