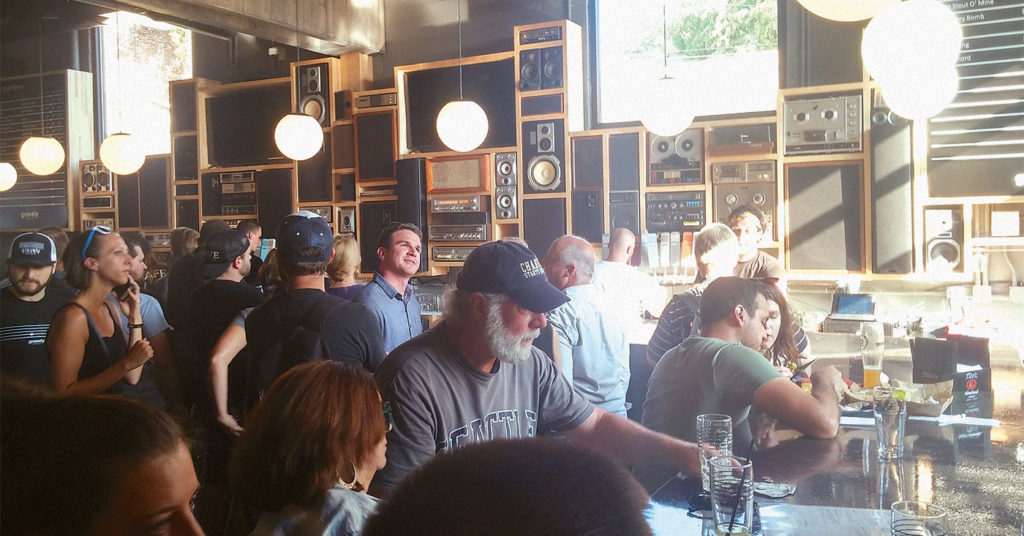 Look out, Louisville craft beer enthusiasts — the next hot, new brewery has arrived.

After a few days of soft opening, Gravely Brewing at 514 Baxter Ave. opened its doors to the public Friday at 3 p.m., and by 5 p.m., the place was almost impossible to navigate through, thanks to the surging crowd.

Several faces familiar to those who know the beer scene were on hand to check things out. I spotted representatives of Mile Wide Beer Co., Akasha Brewing and Fehr’s. No doubt more came and went without me seeing them.

Sporting a long, L-shaped bar backed with a collage of vintage stereo equipment — Gravely is also a music venue, with music themes all around — and a sizable beer hall, it was darn near standing room-only at times. Luckily, guests could spill out onto the two-level deck to peer at the pair of exposed tunnels that were used to ferment lager beers in the 1800s.

The bar is set up for 14 beers on tap, and I’m told those will all be filled soon enough. For the opening, seven beers were rolled out, all named with musical references, and ranging from pretty good to excellent. In three separate visits, I managed to try all seven. (It’s all about pacing yourself.)

Test Pressing is Gravely’s session IPA, crisp ale that eases through like a more floral version of an American Pale Ale, with moderate bitterness. Its heavy-hitting big brother, Power Chord IPA, is a West coast version of the style, with big hop aromas and a satisfying bitterness.

Analog is a pretty straight-forward amber ale with some malt sweetness and toastiness, while Doc’s Hefe is an outstanding take on the style, without the big banana flavors hitting you in the mouth — very subtle. La Bamba is a straight-forward Mexican lager served with lime; think Corona but with much better flavor.

Sweet Stout O’ Mine is a treat for those looking for a medium-bodied, sweet stout. Per Gravely’s description: It is “so good that Axl Rose would take off his headband and spit it round his head like a helicopter.”

Finally, That Cherry Bomb is simply the stout remixed with cherry puree — this is the only one of the seven beers that I was happy to have only a sip of. Still, for a first run, brewer Cory Buenning scored several, if you will indulge the bad humor, hits.

Even if you don’t find a beer you like (but you will), it’s worth it to hang out and enjoy the vibe, and maybe have a couple of tacos from Mayan Street Food. And there’s a walk-up bar if you don’t want to venture into the taproom; Gravely is the only brewery in town with one of those.

Local beer aficionado John King, who is not known for his willingness to bestow artificial praise on anything, referred to Gravely as the sort of place you seek out when you go on vacation elsewhere. He’s right — it’s a true destination brewery, something Louisville needs more of.

“This place is sick,” he said.

Co-owner Nathaniel Gravely expected a big turnout, but he didn’t expect what happened on Friday.

“I have a marketing background, and it has been fun building our brand and hype that goes along with it,” he said, “but I surprised myself in the turnout we got for day one. Close to 2,000 people came through our doors [Friday].”

He said feedback from attendees was overwhelmingly positive. The Cherry Bomb keg blew, but brewer Buenning had more ready by Day 2.

“We have a few things to iron out, but nothing major,” Gravely said.

Look for the crowds to keep coming — and for future Louisville breweries to take cues from this fine establishment.

I don’t normally do this, but I want to send out a very special “cheers” to Leah Dienes, whose mother, Betsy, died recently. I didn’t know Betsy personally, but I consider Leah a good friend, and it was clear to all just how close she and her mom were. Leah is one of the greats in the local brewing scene (co-owner and head brewer at Apocalypse Brew Works), and I wish her and her family peace and strength during this difficult time.