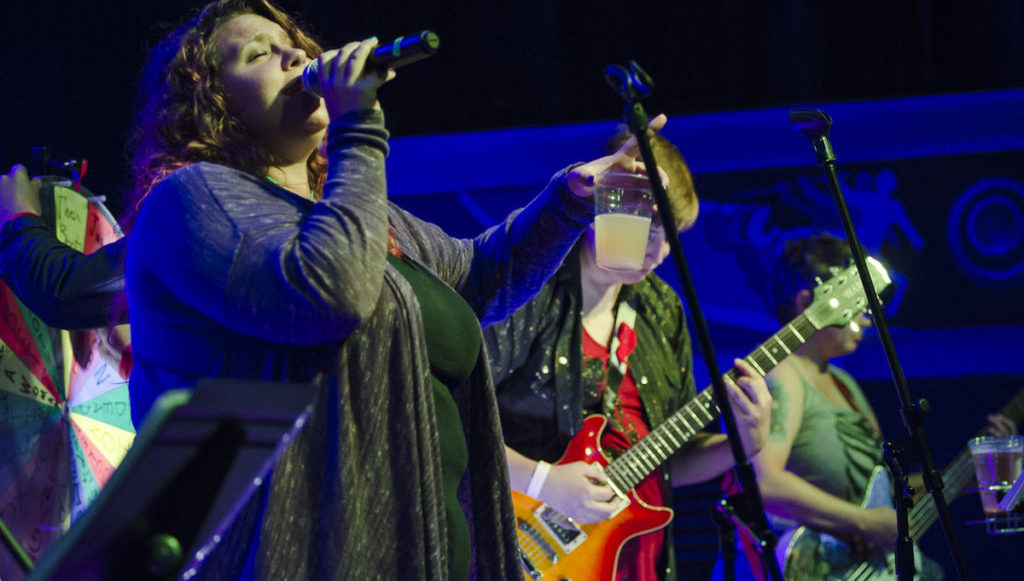 Howell Dawdy, he of the spoken-word rap on songs like the unlikely local hit “Fire Extinguisher,” steps up to the mic on a crowed stage. He’s sporting a bold red shirt, a snazzy suit and a pair of fairy wings. Behind him, a six-person band, Glitteroke, is setting up, ready to play a special fundraiser for Girls Rock Louisville last Friday.

“Y’all look beautiful. The band is warmed up, they are so warm. The mics appear to be very hot. You guys look beautiful. You have a lot of glitter on — it’s perfect,” Dawdy says into the mic, in his usual deadpan.

Dawdy runs a regularly-scheduled karaoke event at Zanzabar. He works the mic, and offers wheel-spinning, Kamikaze-style karaoke. You spin the wheel, and sing the song the marker lands on.

Tonight is extra special, though, as the karaoke rock stars will have the uncommon opportunity to be backed not by some cheesy synthesized track, but by Glitteroke, the live band made up of a who’s who of local rockers. All of them have ties to Girls Rock, a nonprofit whose mission is to give female-identifying and gender-fluid kids confidence through rock ’n’ roll. The nonprofit’s main event is the annual week-long summer camp for kids, but it also throws regular fundraisers, from a Heart cover band concert to a “Golden Girls” trivia night to full-band karaoke. These off-kilter offerings stand out in Louisville’s night life.

And, at Glitteroke, a new initiative was announced — Ladies Rock, an adults camp Oct. 5-8 to help further support, finance and increase the visibility of Girls Rock Louisville. I’ll let Dawdy explain: “Ladies Rock Camp. Have you heard about this? Have you seen about this folks? Ladies rock camp. Do you wish you had something like Girls Rock Louisville camp when you were a kid?”

The audience replies in the affirmative, with hoots, screams, and a chorus of yeses. Dawdy continued: “You probably do. Do you wanna let loose for the weekend and play rock music while supporting GRL, Girls Rock Louisville. Then, Ladies Rock Camp is for you.”

He made this announcement after the first brave soul, local comedian-musician Jake Reber, got up and did a reasonable decent job performing Natalie Imbruglia’s 1997 hit “Torn.”

The band is rocking, but most of the front persons are of the bashful, kind of not great, but having fun, so we’re all having fun anyway, a variety that frequent karaoke patrons know so well. It’s the glory of the thing — people don’t have to be great for the performers and the audience to bond. We know the songs, and we howl along.

The band rolls along smoothly. They’ve been practicing the 32-song set since February, and had a friends-only dry run a week or to before the big night.

After a couple more songs, a woman named Sarah, (“with an H,” yells her friend from the audience,) is called to the stage. She gives the wheel a spin, and needle lands on Aretha Franklin’s “Respect.”

She’s short, with short hair and some librarian-esque  glasses. Her face says she’s excited to sing and game for whatever comes, but also indicates that maybe she doesn’t know this song as well as she would like to.

Then we are treated to another classic karaoke moment.

From the first line, Sarah with an H is kicking all the ass, and her soulful belting shows us once again that there is no direct correlation between height and lung size.

Later, I ask Sarah with an H, who turns out to be Sarah Spalding, if she’s had vocal training.

“I just love karaoke,” she says, though quickly adding, “I took chorus in middle school.”

At the other end of the spectrum are those souls who love the idea of getting up and singing, but freeze up once they see the sea of faces and are staring into the glare of the bright lights.

One such would be rocker is woman whose moniker is T Nasty.

Ms. Nasty gets up, and spins the wheel. She lands on “Girls Just Wanna Have Fun.” The audience applauds in approval, but Nasty is looking downright scared.

She whispers to Dawdy, and after a quick perusal of the sign-up sheet, he invites someone named Vanessa to the stage to help out.

This happens a couple of times over the course of the evening. Someone a bit bolder will be invited up to help someone a little more shy.

“Do you wanna have fun,” she asks Nasty, a lighthearted reference to the song title.

Once the music starts, between the self-assured Vanessa and the vociferous participation from the audience, everyone has a pretty good time.

Later I try to track down Nasty, which is difficult in a packed bar. I did run across Vanessa, Vanessa Blades, that is.

Turns out she’s a local musician, a friend to GRL and one of the attendees at the Glitteroke dry run, so they knew she would be ready to lend a hand.

GRL’s stated goals are about education, and self-confidence, and surely it does a great job pursuing those goals.

But I think the karaoke night, and the inclusion of non-musicians in a variety of musical projects, also speaks to a deeper truth about community.

Music was maybe the first art form. It goes all the way back to prehistoric times. It’s in our blood, but in our modern society we separate the people in  this interaction into two groups: musicians and everyone else.

And it would be irresponsible not to point out that the devision between musician and audience has far too often been a sexist dividing line, with men disproportionately in charge of writing, producing and performing the music.

GRL is redressing that balance, teaching young women to rock, but are also erasing the line completely; when the beat hits, and the vibrations shoot through the air, we are all part of the music.

There are a ton of different ways to interact with music. Maybe you dance, maybe you sing in the shower or rock the air guitar. Maybe you karaoke.

I’d love to say that when my turn came, I got up and rocked the mic, but actually I got up, spun the wheel, and landed on a song I did not know at all. I took the fallback option that Dawdy always offers wheel spinners, and ended up performing Salt-N-Pepa classic “Push It.” How hard can that be? You just say “push it” a lot. Right?

Wrong. I did not “push it real good,” because that song is actually way harder than you think.

But I had the guitarist at my side and that killer synth line backing me up, and it didn’t really matter if I was good at singing. I got to be a rock star for just a second.

Giltteroke will ride again, with a follow-up event already planned for sometime in early December, and a possible all ages event for Galentines day.

Keep your ear to the ground, and we’ll let you know when you can have the chance to be a rock star for one song.

If you want to put a little more time in, and you’re a grown-ass women, Ladies Rock Camp is coming at you Oct. 5-8, four days of learning to rock, no musical experience required.

“[Glitteroke] is a good kick off to really introduce people to a program that adults can participate in, as well,” Salena Filichia, bass player for Glitteroke, and member of GRL fundraising committee, said. “I think all of the volunteers agree we all wish we had something like Girls Rock when we were kids. And I think a lot of volunteers are still like, ‘Man, I would totally do something like this now.’”