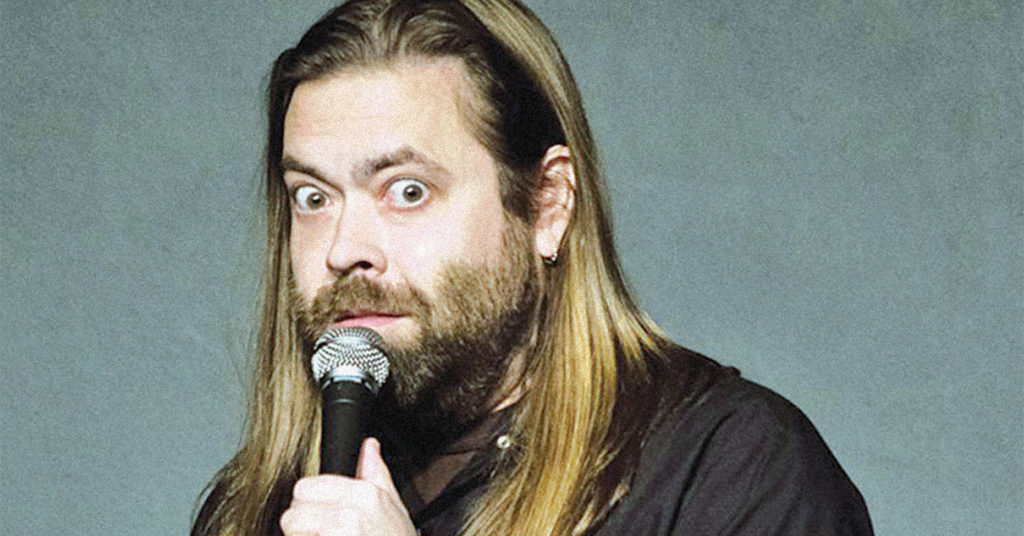 Gabriel Rutledge paints his home life like a Norman Rockwell, but using Picasso’s brush. Imagine the absurdity of a family pretending not to know they are screwed if dad ever has to be the most responsible person in the room. Rutledge has appeared on Comedy Central’s “Live at Gotham,” Nickelodeon’s “Nickmom Night Out” and “Laughs” on FOX. He wrote a memoir “Happiness isn’t Funny,” and is working on a children’s book for adults. He returns to Louisville to headline The Caravan this weekend, and took time to call in and talk about a little bit of everything.

I haven’t really spoken to any young people about this, but does his generation recognize what a shit show this administration is?
He knows a little bit. They watch a little bit of news at school. And to be honest, I pay more attention than I want to, but I’m really trying to not. I’m trying to step back. What’s the alcoholic thing? ‘Accept things I cannot change, the strength to change the things I can, and the wisdom to know the difference.’

Being on the road so much, have you noticed a change in the country in the last six months?
In comedy terms, it’s like a heckler got elected president. But when it comes to politics, it’s divided right now, so I avoid it, because I want everyone to have a good time. You even bring politics up, the room immediately gets uptight, and they don’t even know what you’re going to say yet. Maybe that’s a cop out. Maybe I’m supposed to be speaking truth to power. But I’m OK with taking an hour off and talking about funny things my kids say to me.

What’s the funniest thing one of your kids has ever said to you?
When I got a vasectomy, I was explaining to my son that, that meant no more kids. He wasn’t going to get another sister. He’d never get the brother. This is it. We’re done. Then, he said, ‘Well, you’re done. Mom could still have a kid with a guy who hasn’t had a vasectomy.’ He was 12! I thought, ‘Wow, this kid is brutal. I travel a lot — thanks for putting that thought in my head.’

You wrote a memoir a few years back. What was the hardest part of writing a book?
It’s more about now. Because when people tell me they’ve read my book, it feels very weird. I immediately think, ‘You know a lot about me.’ Which is totally my fault. I get it. But it can feel very vulnerable when a stranger knows that much about you, and you don’t’ even know their name.

On stage or in the book, what’s the one thing you’ve said or written that has gotten the most blow back from someone in your personal life?
Only twice have I written a joke where my wife said, ‘Please stop saying that.’ And I have to respect that because, trust me, I put her through a lot. And there was one story in the book, where someone who was involved messaged me and was like: ‘I have a really good job now. Can you please stop saying this shit?’

Someone recently told me that you look like a pot dealer. Can you hook them up?
[Laugh] I do look like a pot dealer. Really, it’s just a midlife crisis. It is funny. I haven’t always had long hair and a beard. Now that I do, I don’t get to do nearly as much loitering as I used to. I didn’t know the life of short-hair privilege I was living.