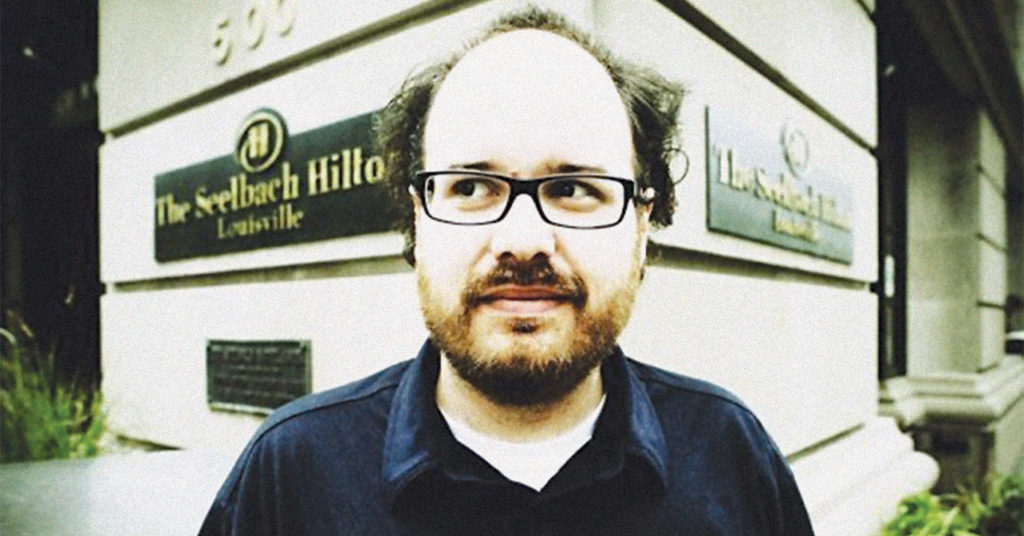 Dave Waite may look nerdy, but his caustic wit and oddball charm lead you to believe that he’s the one guy who could get laid at a Dungeons & Dragons convention. Waite is from Ludlow, Kentucky, and started doing comedy in Cincinnati. He lives in Los Angeles, where he co-produces “The Secret Show” with former Louisville-based comedian Nick Anthony. You may also recognize him from appearances on “The Tonight Show with Jimmy Fallon,” Comedy Central’s “Not Safe with Niki Glazer” and “Last Comic Standing.” In 2012, he won The Laugh Skull Comedy Festival. And last year released his most recent album Dead Waite. He will be performing in Louisville this week for a special, one-night only performance at Purrswaytions.

LEO: You’ve been to Louisville countless times. Do you have any memories of being here that stand out?

Dave Waite: I have spent a lot of time at The Taproom and The Back Door. There have been a lot of late nights in Louisville. Bars are open until 4 a.m. in Louisville, so my memory is a little hazy on all the shenanigans. Everywhere else the bars close at 2 — you all are animals, savages.

You released Dead Waite last year. Are you working on anything new right now?

I’m working with a documentary filmmaker right now, working on something. It’s going to intercut my stand-up with a documentary about me. I want it to be something more personal than your typical comedy special — like [ESPN’s] ‘30 for 30’ about me. It’s a real exercise in narcissism. I really want to paint a bigger picture for the audience. There are so many specials you watch, and you don’t know the comedian any better as a person by the end, then you did at the beginning. I did an interview for it, and they asked me, ‘So, who is Dave Waite?’ I didn’t have an answer, so I figured having other people answer for me made sense. Hell, maybe if I could answer it, I wouldn’t have to make this documentary.

What kind of things are inspiring your new material?

Life experience, just getting out in the world and mixing it up a little bit. When I’m out there in California, people want to talk shit on Kentucky. I think there are a lot of great people here, and a lot of great culture. And then I go out to dinner with my parents last night, and I see Confederate flags everywhere. I try not to be political on stage. I want people to laugh and have a good time. But in the face of ignorance and hatred, I don’t think it’s right for anyone to sit on the centerline. I’d rather be talking about boobs and sex. I don’t want to be talking about politics, but when you see something, say something.

Does that mean you have been getting a little more political on stage?

When I talk about something like that, I try to blend it in so people don’t feel as attacked. I like to think we’re not as divided as we think we are. In Charlottesville, I don’t understand why they’re upset. A lot of other people have a lot of legitimate gripes to be upset about. But a bunch of white guys? Did the white-guy train stop? It doesn’t seem like it. There are numerous times I probably should have been arrested, and the police let me go. If I wasn’t a white guy, that probably wouldn’t have happened.

As a white American male, myself; I’m with you, that makes no sense.

I mean their guy is the president. He won. He’s there. I don’t know why they’re so angry. When Barrack Obama was in office, I didn’t get mad for eight years. Fox News is still mad, and it’s their guy. You all should be enjoying this — this is your time. It seems like certain people just enjoy being mad.

You and Nick Anthony produce ‘The Secret Show’ in Los Angeles. Dave Chappelle has dropped by a done a few sets on your show. That had to be surreal.

It’s funny meeting someone who is so famous the laws change for you. You can’t smoke anywhere in California, and he was chain-smoking on stage the entire time. TMZ came one night, so did Bradley Cooper and Jonah Hill — it was like the circus came to town.