Fake news wasn’t invented in 2016. Remember what you browsed as you checked out at the grocery store: “Loni Anderson Gives Birth to Aqua Child with Gills!”

Whether people were in it to profit, or to undermine politicians, state leaders and institutions, they have been publishing fake news for centuries.

Today, there are three kinds of fake news. The most startling revelation of the Trumpian Times we live in is that they are all dangerously effective… and pose a threat to American stability, because of how fast information travels on social media.

First, there is the original fake news. These fake stories are designed to get low information consumers to spread the most rancid of emotionally evocative headlines — just hit the “Share now” button. But they are politically-motived, conspiracy stories. These are the kinds of stories shared over social media, creating tension between you and your friend, family member or whoever shared that story, because — how could you be so stupid to believe that? But to some, these stories confirm how they see the world. Here’s one I found on Facebook: “Muslim Mob Throws A 15-Year-old Christian Girl Off a Third Story Building” on libertytoday.net, with a subhead: “In other words, Muslims Just Being Muslims.” It was just two sentences, accompanied by two pictures of a girl falling and a body bag, and a source: shariaunveiled. No author listed on the story. Follow the accountability wormhole, and shariaunveiled blogged the same two sentences in 2013, attributed to Tundra Tabloids.

The second kind of fake news is more subtle. It is based on real events. For instance, a politician’s sound bite gets taken out of context and manipulated to serve another purpose. These stories are from organizations, websites and blogs with official, newsy sounding names. My all-time favorite example of this was during the Affordable Care Act debate in 2010. One site, cnsnews.com, did a story called: “Pelosi to Aspiring Musicians: Quit Your Job, Taxpayers Will Cover Your Health Care.” What Pelosi actually said was that Obamacare allowed people to be entrepreneurial: Instead of staying at a job for employer-provided insurance, you would have the option to start your own business and not worry about being denied coverage or losing your insurance altogether.

This fake news was then repackaged by similar sites, such as Hot AiR, RedState, America’s Watchtower and The Daily Caller. And then shared across the social media world.

These are perversions of the truth to serve a purpose — profit and/or political power. This channel of fake news is utilized by both Republicans and Democrats, and is equally disgusting.

The third kind of fake news is perhaps the most insidious, because it comes from our elected leaders: President Trump and, in this state, Gov. Matt Bevin.

Trump’s success at this may be in question, as more Americans seem to be recognizing his overt lies. But that shift is happening thanks to real journalists, doing real reporting — the best that this democracy has to offer. Here in Kentucky, we don’t have the weight and resources of the Washington press corps, The New York Times and Washington Post. Here, we have talented professionals who care about their jobs, but who are under harsh attack by Bevin, who uses the bully pulpit of the governor’s office to attack journalists through Facebook and Twitter.

When Bevin falsely accuses two media outlets and a journalist of using a drone to spy on his children, he can’t just be quickly dismissed as wrong. He is, after all, the governor, right? Bevin was correct that a news outlet (WDRB) legally used a drone for their real news story — just as helicopters have been used for decades. But in falsely accusing others, he tarnished their credibility. Instead of being divided over issues — appropriate in a democracy — we’re divided by what we believe is real.

That is why established news media reporting real facts, and holding government accountable, is the only way to combat fake news. 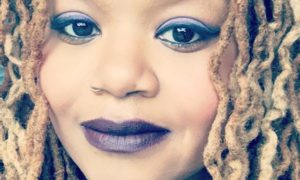 Erica Rucker is LEO Weekly’s Arts & Entertainment Editor. In addition to her work at LEO, she is a haphazard writer,  photographer, tarot card reader, and fair to middling purveyor of motherhood. Her earliest memories are of telling stories to her family and promising that the next would be shorter than the first. They never were. You can follow Erica on Twitter, but beware of honesty, overt blackness and occasional geeky outrage.