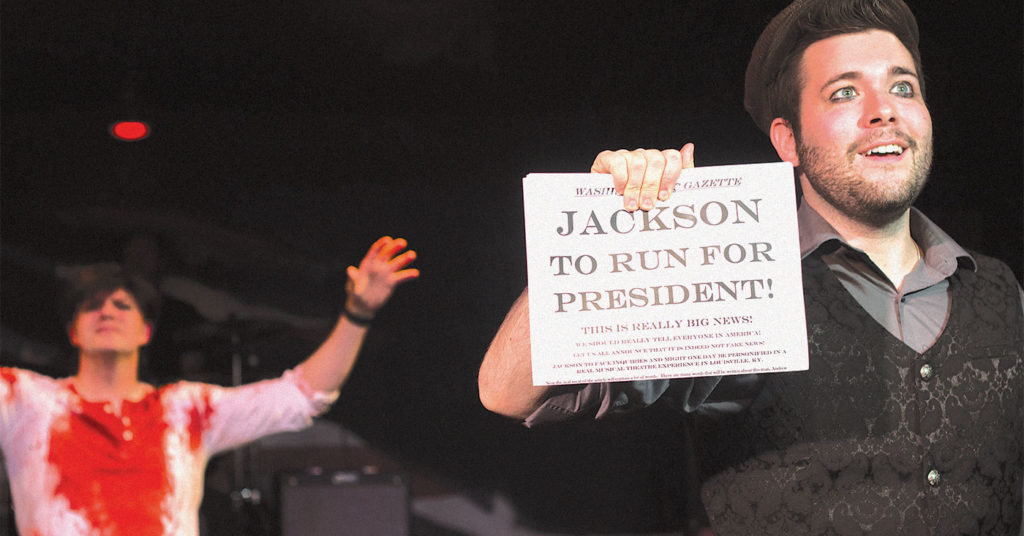 When it stops being fun and your patience is done,
And you see being President’s hard.
With this country before you that cannot be governed,
You find yourself powerless, bloody and scarred.
And what is it for? The love of a people!
And who is it for? This nation we made.
That guy who did everything his way, where has he gone?

Andrew Jackson, the seventh president of the United States, was the first true outsider to lead the country. The first five, whose names you can likely reel off without looking, were bona fide Founding Fathers and the sixth was a Founding Son.

Then came Jackson, a self-made man, born on the frontier, son of recent immigrants and orphaned by the time he was 14. He built a career as a planter, slave owner and regional politician. And he built a national reputation as frontier warrior who fought multiple wars against Native Americans, conquered the Spanish outpost in Florida and became an American icon by defeating the British at the Battle of New Orleans.

In 1824, Jackson ran for president, winning a majority of the popular vote but losing the Electoral College vote (to Founding Son John Quincy Adams). In 1828, Jackson ran again, this time on a populist platform that targeted Washington corruption and promised to diminish the concentrated power of large businesses and banks.

In 2006, when the satirical rock musical “Bloody Bloody Andrew Jackson,” by Alex Timbers, with lyrics and music by Michael Friedman, was first performed, George W. Bush was president, the Tea Party was a historical memory, not yet a national movement, and the most prominent populist politicians in recent American memory were businessman H. Ross Perot, wrestler Jesse Ventura and bodybuilder-turned-actor Arnold Schwarzenegger — none of whom were ever plausible presidential prospects (notwithstanding the silly notion of amending the Constitution to enable Schwarzenegger to serve).

I highlight the fact that “Bloody Bloody Andrew Jackson” is more than 10 years old because it is uncannily a play of this very moment. It’s well known that the 45th president keeps a portrait of the seventh in his office. And politicians such as Rudy Giuliani and Newt Gingrich frequently note a similarity between the two presidents.

More than that, though, the rhetoric and political arguments of the play — which runs through this weekend in an impressive Alley Theater production directed and choreographed by Valerie Canon — could have been pulled from dozens of cable news broadcasts over the last year. In fact, it’s a play with plenty of anachronistic modernisms, including press conferences, cell phones and all the apparatus of modern politics.

In the opening production number, “Populism, Yea Yea,” a fiery mob proclaims its intention to “take this country back.”

Over and over again, we see Jackson’s celebrity status and charisma outweighing even the pretense of “policy.” In one tune, Jackson sings, “You wanna see my stimulus package? I’m gonna fill you with Popula-Jizzm.”

If you’re looking for accurate history, this is not the play for you. The facts of Jackson’s life are often distorted for effect.

The play’s account of Jackson’s interactions with Native Americans has been controversial since its inception. Early versions of the play suggested that a corrupt Native American chief named Black Hawk collaborated with Jackson to sell out other tribes and benefit his own tribe. That never happened. The actual Black Hawk fought against the U.S. during Jackson’s administration. His only encounter with Jackson occurred when he was brought to Washington as a prisoner. Later versions of the play were amended: The character is now called Black Fox (played here by Paul Stiller, who also serves as music director for an excellent band that includes Jake Minton, Donnie Arbuckle and Derek Carpenter). But character seems to be completely fictional.

What isn’t fictional is that one of the tragic legacies of Jackson’s administration is the Indian Removal Act of 1830, which led to the forced relocation of Native Americans to the west via the “Trail of Tears.” And the play’s bitterly satirical take on that episode is a harsh indictment not only of Jackson, but of white Americans who piously complained about the morality of the Removal — and who nevertheless profited from it.

It would be easy to see this play as an full-throated indictment of Jackson — partly because of the formidable performance by Christopher Shiner in the lead role. He plays Jackson with a full-on swagger and blunt bad-boy charm that is irresistible — even when he’s at his crudest and cruelest.

Nearly the entire cast doubles in multiple roles and in ensemble numbers that create quite a spectacle on the intimate Alley stage (with help from Carol Dines and Mandy Kramer, costumes; Greg Sanders, set; Clare Hagan, set painting and Martin French, lighting).

Jackson’s ill-fated wife Rachel, who was accused of bigamy during Jackson’s brutal campaigns, earns a fiery portrayal from Victoria Edgar. And I suppose it speaks for the time that most of the other women in the cast, all of whom turn in vivid cameos, are listed as “ensemble” — Caitlin Clemons, Heather Lundberg Green, Anna Shelton and Joy Beth Dewitt.

That said, the play’s other woman is a narrator, played with brio by Magnolia Hensley.

Although it’s a show-no-mercy satire, the play does tap into a reservoir of unsentimental sadness. Some of that comes from the humanizing influence of a Native American boy named Lyncoya (played here by Brooks Roseberry) whom Jackson adopted (historical fact). Some comes from Jackson’s own emergent doubts about the nature of his legacy. And some comes — after nearly and hour-and-a-half of riotous, raunchy non-stop laughs — from a melancholy recognition of the country’s collective loss.