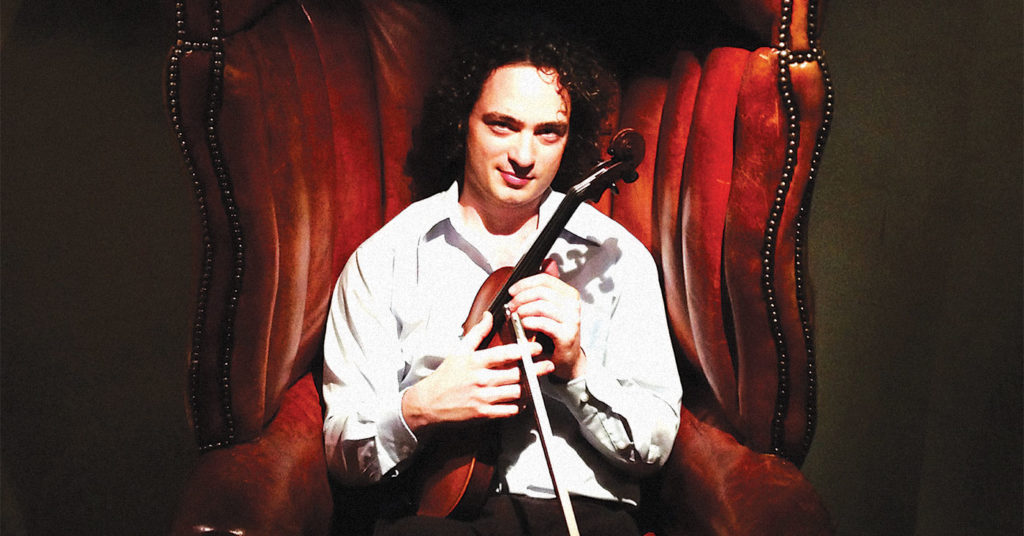 Scott Moore, a composer of the original score for 'Lady Lear'

Creel and Moore have returned for “Lady Lear,” deepening the artistic collaboration that he and Creel began with William’s “Folly.”

In an interview with LEO, Creel and Moore outlined the changes to the plot, the themes from “Lear” that spoke to them and their collaborative process, all the while demonstrating a connection to the source material that was structural and cerebral, as well as palpably felt.

“Lear’s arc forces audiences to grapple with what it means to get old, and what aging does to identity,” said Creel, adding that it’s the conflict of trying to balance love, power and issues of inheritance that drive the plot, not to mention some plain-old bad parenting.

“As a parent, you can’t ask your children to tell you how much they love you — that’s not how parenting works. The absolute love goes from parent to child.”

His deep relationship with the text might seem surprising at first. Dancers’ intelligence can get ignored sometimes because of their intense beauty. It’s always a mistake, but it’s especially foolish in regards to Creel.

The Bostonian grew up playing the piano, but decided to opt out of the conservatory track as a musician so he could take a broader focus at a liberal arts school. He ended up going to Amherst College with a double major in geology and English. In between all that he worked on dancing.

But it’s his upbringing that may have influenced “Lady Lear” the most.

“I grew up in Boston, I have very early memories of going to weird Shakespeare productions at the A.R.T. [American Repertory Theatre], like ‘Richard II’ in a swimming pool. Bizarre things,” said Creel.

There was poetry at Creel’s home, as well, and he described “poetry bashes,” when his family would gather and read the likes of Larkin, Tennyson and Wordsworth.

This deep understanding of poetry and drama allows Creel to take generous liberties with Shakespeare’s script, way past gender-flipping the titular ruler, according to Creel, because of the different story telling strengths in the two mediums, as well as trying to fit Shakespeare’s labyrinthine plot into an hour and a half.

For example, take the storm in Act 3 , Scene 2, the one with that famous monologue: Here it isn’t represented by a great speech, but rather a full storm of dancers, surrounding and engulfing Lear, all while allowing interactions between The Fool and Lear to move forward the plot and reinforce the themes of the work.

In conversation, Creel and Moore frequently interrupt each other, overlapping thoughts and jumping from idea to idea.

It’s an exciting indicator of the level that the music and dance might work together in “Lady Lear,” and it points to the fact that a really excellent score is just as important to a ballet as great choreography.

After all, it was music by the likes of Pyotr Ilyich Tchaikovsky, Carl Orf and Igor Stravinsky, that arguably made ballets such as “The Nutcracker,” “Carmina Burana” and “The Firebird” essential parts of the ballet canon.

Moore started as a violinist at age 4, but began writing music soon after and has continued to do so through all his evolutions as a musician.

“I’ve always written music in whatever area it is that I’m focused on at the moment, whether it’s bluegrass, jazz or rock ‘n’ roll,” said Moore.

The Moore-Creel collaboration came from a phone call; Moore simply called up the ballet and asked if anyone wanted to collaborate. Of course, his call was backed by a resume that included working with a Ben Sollee, Jim James, Will Oldham, Rachel Grimes and Teddy Abrams, among others.

Moore first worked with Creel to score “William’s Folly.” “Folly” began its life as “Sonnets in Blue,” a shorter work for Louisville Ballet’s Choreographer’s Showcase. Creel had assembled preexisting music for Sonnets, but when KY Shakes, and the ballet decided to let Creel expand Sonnets in Blue as part of KY Shakes summer season, Moore came on board to create new music.

That score took the form of an Appalachian-inspired set of themes and motifs that carried the taste of bluegrass, but had the structure of classical music, mostly played on the violin.

For “Lady Lear,” Creel compiled music he found inspiring or interesting, and then Moore could compose with an idea of the tone Creel wanted. He then began searching through his idea archive, which he keeps on his phone, as well as on sheet music that goes back to childhood.

For example, though Lear’s two ungrateful children often work in concert, each harbors ill will for the other. To develop their musical themes, Moore used parallel sevenths. The notes fit together, but are discordant.

The duo’s complex, but emotionally charged, approach to creating movement and music will hopefully fit Shakespeare’s complex characters and plot to create an invigorating, new interpretation of the 400-year-old classic.