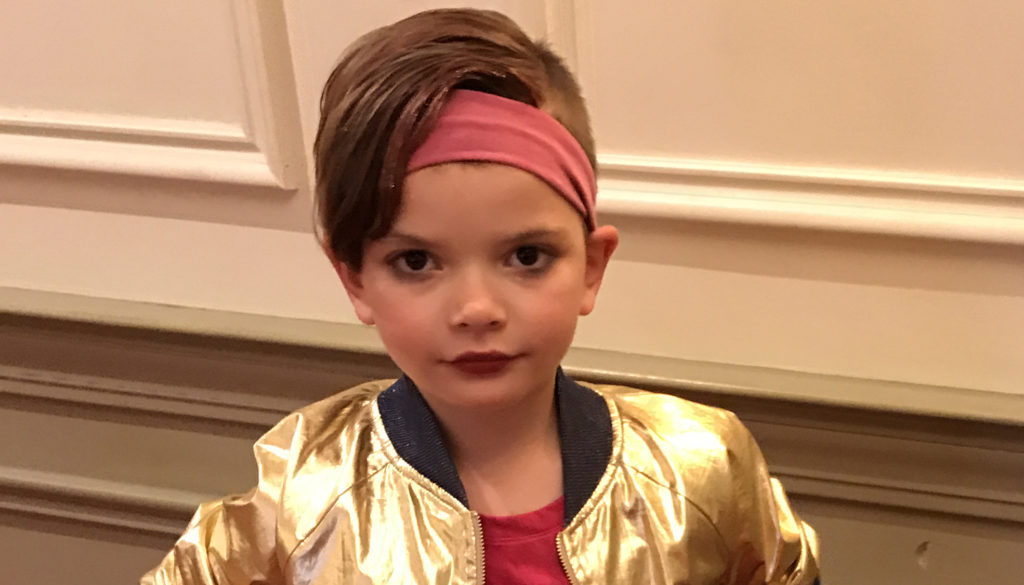 The battle over trans issues — for lack of a better term — are being fought in bathrooms and state houses across the country. Not to mention on Twitter, where President Trump recently chose to announce his plans to move forward with a plan to remove all trans folks from the military.

Pretty frequently, the argument includes questions — from both sides — that basically boil down to: “What about the children?!”

Despite the sometimes-histrionic nature in which the question is asked, it’s still a good question.

Well, what about them?

I had the pleasure a year or so back of meeting Gabriel, now 7 years old. His mom — Missy Smith — is a friend of a friend. We talk about comic books  online, and hang out IRL, occasionally.

Gabriel is gender fluid, or maybe nonbinary. He once told his mom that’s he’s not a girl, but that he has a girl inside him. He’s young enough that’s he’s really not focused on finding the right words to describe himself, although for now he’s still using male pronouns.

He’s precocious, bright for his age — a big talker whose mind sometimes goes a little faster than his mouth can keep up. He talks in long, stream-of-conscious, grammatically-circuitous sentences.

I met up with Smith and Gabriel for dinner recently. He just turned 7 this week, and his present was a ticket to see “War on the Catwalk,” a touring show featuring a selection of drag queens from Season 9 of “RuPaul’s Drag Race,” his favorite show, which he says inspires him.

In addition to a general admission ticket, he got a special ticket to attend a meet-and-greet before the show started. I met Gabriel and Smith for dinner before the meet-and-greet, and I caught up with them just afterwards too, to see if the show was everything Gabriel had hoped for.

The kid came in looking fabulous. He had an incredible gold jacket, light makeup and some strappy, silver sandals. His toes were done up, though not his fingernails, and his coiffure had that perfect “oh this, I just threw this on” chic, pushed back with a pink headband.

“He was probably 2, 2 1/2 when I realized that the way he experienced gender, and the way that he expressed himself didn’t follow the binary. The way he would just be in the world — they way he carried himself,” said Smith.

Despite having a pretty good idea what was going on, Smith didn’t make a big deal about it. She and her husband, Vance Smith (Gabriel’s stepdad, but Gabriel calls him dad) just let him be himself, and wear what he wanted, whether it was a dress, makeup or whatever.

Things got more complicated when Gabriel started school. His parents and his big sister Morgan appreciated him for who he was, but some of the kids at school didn’t.

In conversation, Gabriel doesn’t focus on the hurtful moments; they come up only in the middle of other sentences, such as when he was talking about picking outfits out for school.

Smith talked a little more bluntly about what Gabriel went through, when he suddenly had to deal with people who were less comfortable with him.

“He struggled with feeling alone, and he would say things like, ‘I’m weird,’ or ‘I’m crazy, there’s no one like me.’”

Despite their earlier instinct not to interfere with Gabriel’s gender expression, Smith realized it was time to do something. A friend had told her about a gender-fluid playgroup a few years prior. Smith hadn’t acted on the information at the time.

“I kind of kept it in my back pocket till I knew we needed it,” she said.

When the time came, Smith asked Gabriel if he’d like to try it out.

In what I came to realize was typical Gabriel fashion, when I asked him about the play group, his mind ran to kid stuff such as what games they played (Monkey in the Middle), and what snacks they had (cheddar Goldfish). He doesn’t focus on his gender, unless you ask him to; he’s content to be. I asked him specifically how it made him feel to be with trans kids, and if he learned anything important.

He luxuriates in phrases like “show our passion to the world.” The kid is dramatic and has a flair for language, whether he’s praising “Digimon,” a 2000s cartoon that he just discovered on Netflix, or talking about how he shops for clothes.

“I kinda go wild style. I pick all the things I think I might like for different kinds of tournaments, and I use them to make up a design,” said Gabriel.

He brings tournaments up pretty often. There aren’t as of yet fashion, or drag contests, for kids Gabriel’s age, but he dreams up outfits for them anyway, planning for the future.

Smith thinks that “Drag Race” and adult drag queens help put Gabriel at ease because they show him grown up examples of people with whom he can identify.

“He knows he’s not alone, and he has an idea what that looks like as he gets older,” said Smith. She added that with role models for the future, and the peers he found in playgroup, he started feeling better.

“He became very calm, very comfortable in himself,” adding that he can get annoyed when other people focus on it, “He’ll say ‘no one asked that girl why she’s wearing a dress, why’d they ask me?’”

Before long, the last of the sushi and tempura has been devoured, and it’s time for Gabriel to head out to meet his idols. He was getting a little nervous, but was still excited.

“I’m gonna talk in front of them in real life. It might be embarrassing, it’s gonna be fun. I really don’t know any other way to explain it.”

I didn’t get to see Gabriel meet the queens, but another friend of Gabriel’s mom caught the moment on video.

The queens greet him with an intense joy, and he starts hugging them immediately. It’s a far-away shot, but you can still see drag queen Alexis Michelle wiping away tears.

After the show, Gabriel tells me how it felt.

“I was happy, feeling great, had an emotion that I was where I’m supposed to be. I was comfortable of who I am.”

The debate around trans issues and rights probably isn’t going away any time soon. Plenty of people out there, and politicians, are still fighting against Gabriel’s right to be who he is. But his parents love him, and respect his identity.

And he had a pretty great seventh birthday.