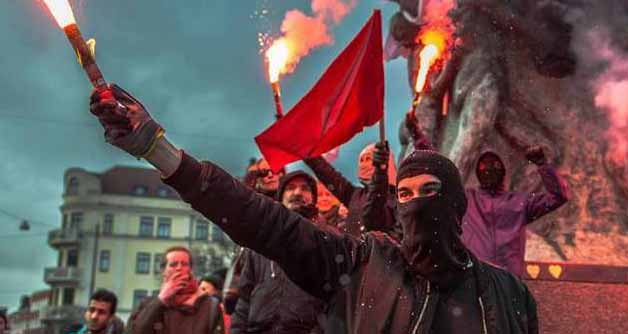 Thunderdome: Villains!
Kaiju
Free  |  9-11 p.m.
Thunderdome, which bills itself as Louisville’s best comedy competition with a theme, is returning for another hilarious contest. This time, comedians will take on the theme of “Villains!” Watch as “seven will enter, only one will leave… with the title of Master Blaster of Ceremonies!”

Louisville ARA: The Antifascist’s Film and Book Talk
The Floyd Theater
$5-$10 suggested donation  |  6-9 p.m.
Join Louisville Anti-Racist Action for a night of film and discussion about the Antifascist movement. There will be a screening of the documentary “The Antifascists,” which follows antifascists fighting a “low intense war” against fascism in Greece and Sweden; A talk by Alexander Reid Ross, author of “Against the Fascist Creep,” which “sheds light on the ambiguous subcultures that feed into fascism”; and a panel discussion/Q&A with folks who were present at the Unite The Right Rally in Charlottesville.

A Resistance Reading Group
Douglass Boulevard Christian Church
Free  |  6:30-8 p.m.
Are you part of the resistance? Or maybe you want to better understand our current political predicament? Join the Resistance Reading Group (on the fourth Wednesday of every month), which will use a mix of nonfiction and fiction to “help us understand the current cultural and political moment we live in.” If you are looking to get ahead of the reading curve, the first book will be “Just Mercy: A Story of Justice and Redemption” by Bryan Stevenson.

Four Pegs Picture Shows: ‘Adaptation’
Four Pegs Beer Lounge
Free  |  7-9 p.m.
Join Four Pegs as it continues its love affair with writer Charlie Kaufman with a screening of “Adaptation,” a film about Kaufman (played by Nicolas Cage) as he fights with writer’s block and toxic family members. Also, it’s $4 draft night, so that should add to the fun.

Sullivan’s Beer Pong Tournament
Sullivan’s Tap House
Free  |  Sign ups at 10 p.m.
Are you a beer pong master? Test your skills at this Beer Pong Tournament with $1,000 in prizes! First place wins $500, second place wins $300 and third place wins $200. And even if you lose, you still get to enjoy bar specials including $5 pitchers of Miller Lite, $3 well drinks and $1 Miller High Life and PBR. Sign ups begin at 10 p.m., the tournament begins at 11 p.m.