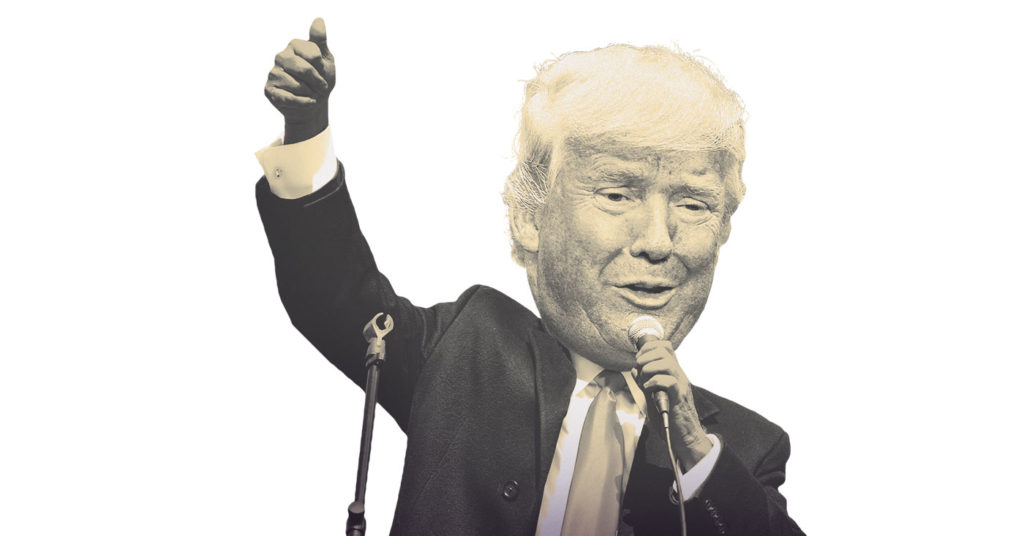 The election of Donald Trump — a man whose authoritarian impulses are readily apparent — immediately unleashed a flood of comparison to historical tyrants that quickly crashed up against the rhetorical levee known as Godwin’s Law. Popularized by lawyer Mike Godwin, the rule suggests that the longer an online discussion goes on, the likelihood of a comparison to Adolf Hitler reaches near certainty, and that point is when rational discourse has ended. (Personally, as a reader of a more diverse history than are Reddit commenters, I’m peeved that interesting dictators such as Juan Perón, Mobutu Sese Seko and Kim Il-sung are neglected).

Regardless, Trump and his fervent supporters’ enthusiasm for using Hitler’s “Big Lie” strategy does raise a legitimate question: How does Trump’s use of mass media compare to that of the National Socialists?

Trump’s vicious Twitter attacks on CNN and “Morning Joe” cohost Mika Brezinski recall the Nazi abuse against what it called the “lying press,” or lügenpresse. The Republicans have long attacked the press rhetorically, but GOP politicians tended to maintain cordial private relations with reporters, hoping to use these contacts to shape stories and spin setbacks. The Trump crowd rejected that norm, opting instead for a frontal (and sometimes physical) assault.

It started when then campaign manager Corey Lewandowski manhandled a reporter for Breitbart News in March 2016 and reached dangerous levels when Trump directed his supporters’ anger at NBC’s Katy Tur at a campaign rally. “Look back there! ‘Little Katy,’ she’s back there,’” Trump yelled, pointing to the press pen. “She’s such a liar, what a little liar she is!” She later had to be escorted from rallies by Secret Service agents.

The virulent press hatred has moved from Trump to other politicians. Montana GOP congressional candidate Greg Gianforte body-slammed Guardian journalist Ben Jacobs this May on the eve his victory.

In Kentucky, Gov. Matt Bevin refuses to answer questions from the press (including reporters of the two major newspapers in Kentucky) and has attacked them repeatedly on social media. He angrily called veteran reporter Tom Loftus a “sick man” and “peeping Tom” for investigating Bevin’s apparent below-market value purchase of an Anchorage mansion from one of his political appointees.

Kellyanne Conway’s invention of “alternative facts,” such as the claim of record crowds at Trump’s inauguration and the “Bowling Green Massacre,” is also ominous (although Conway’s fantastic tales seem more like George Orwell’s “Oceania” than Hitler’s Germany). More alarming is the recent story by McClatchy bureau reporters that Trump’s son-in-law Jared Kushner may have made sophisticated voter targeting data available to Russian agents launching fake news attacks on the Clinton campaign in the late stages of the 2016 campaign. Real fake news and Trump #fakenews accusations are beginning to blur in the minds of Americans.

Certainly, the speeches and tweets of the @realDonaldTrump display a skillful use of robust untruths to dissemble, disinform and distract. But is this all part of planned mass-media strategy like that employed by the Nazi leadership? Or does it merely reflect the native skills that Donald Trump has long used to bamboozle investors, bulldoze bankers and bemuse TV viewers?

For the Nazis, propaganda was a science and central to their party’s rise to power. Building on the ideas Hitler outlined in his 1925 autobiographical book “Mein Kampf” and integrated by Reich Minister of Propaganda Joseph Goebbels with modern publicity techniques, the Nazis created a well-executed theory of mass communication. Nicholas O’Shaughnessy’s “Selling Hitler: Propaganda and the Nazi Brand” argued that the Third Reich was the “most comprehensive public relations operation in history.” It ran according to a number of principles, the primary one being that Hitler was not only the leader — he was the message. Strong, untainted by scandal and married to the nation, Hitler built a pristine public image without the hint of a private life. (This is why he hid Eva Braun away in Birkengarten). Hitler’s dramatic skills and carefully-constructed public demeanor enhanced his stature, and he rarely was off-message.

The alternative fact was an important part of Nazi propaganda, but those “truths” needed to “resonate” with the German public. The Nazi campaign against Jews worked because anti-Semitism had deep roots in European and German history. O’Shaughnessy talked about the Nazi’s “partnership with the masses.” It is important to remember how fertile the ground was for theories of the “stab in the back” by elites and Jews after Germany’s defeat in The Great War (World War I) and the resulting economic collapse. The generals, many of whom loathed Hitler, were nonetheless happy to point the finger at someone besides themselves for the national disgrace.

Hitler consciously employed a number of effective tools: repetition, stimulus-response, drama and entertainment and, above all, he used emotion rather than reason to move crowds and the German public. He and Goebbels wanted to “appeal to the intuitive world of the great masses, not the understanding of the intellectuals.”

An essential element of National Socialist mass communications was inherent in the regime’s totalitarianism: The Nazis wanted to control every medium — news, radio, theater, movies and the arts. Even architecture and urban planning was used to promote the Third Reich.

It is clear why commentators have made comparisons between the Trump communication policy and that of the Nazis. Trump is certainly the “leader and the message,” but I think the circumstances of both 21th-century America and Trump himself make it impossible to create the pristine, almost godlike public image that Hitler devised. Trump’s life is too messy; the press is surprisingly more dogged; and even Trump’s supporters ignore but do not deny his flaws.

Certainly, the Trump campaign thrived on emotional issues including immigration and terrorism with identifiable scapegoats such as Mexico and Islam to blame. The U.S. was not in a great depression like Germany was, but globalism has hollowed out industrial centers of the Midwest enough that attacking trade agreements and immigrants for job losses resonated strongly with some key voters.

However, the sharp partisan divide in America has limited the reach of Trump’s emotional pitch. While Trump is decidedly not interested in pleasing the elites, he pleased only a minority of the public, though that minority was large enough for an Electoral College victory. (It is clear that the mean tone of his campaign and the 35 percent of the public that still stands fervently behind Trump says volumes about an electorate still hurting from globalism and not hearing good answers from either party.)

The real failure in the comparison, however, comes when you look at the total control of the Nazi message by Hitler and his inner circle, and then compare it to the chaotic communications from the Trump administration. The difference is profound. The Nazis wanted to dominate all media — politics, culture and the arts — but Trump and his advisors barely acknowledge the existence of any media but Twitter and cable news.

I think this has two causes.

First, Trump is too unfocused. He constantly undercuts his press team with off-message Tweets and policy U-turns. Just recently, a cabinet member appeared on Sunday talk shows to tout an absurd joint U.S.-Russia “Cyber Security unit” — only to see the president scrap the idea with a tweet a few hours later.

However, the other difference is ideological. The Nazis were statists (in which the state largely has control over economic and social affairs), but Trump’s most nationalist (and dangerous) advisor, Steve Bannon, is more of a libertarian, as are many Trump insiders. (By comparison, most European nationalists are supporters of a strong national state). One example: Trump’s proposed budget sharply cuts public arts and broadcasting. The Nazis would have co-opted and expanded those programs as part of a totalitarian propaganda strategy. But Republican libertarians loathe public arts and media; axing their tiny federal budgets has been a long-time goal.

So, if Trump and his motley cohort do not measure up to Hitler and the Nazis, does this mean we can go back to laughing at them, not fearing them?

My friend Ingrid Anderson, a Jewish studies scholar, recently wrote a cautionary piece for The Conversation that shows the more commonplace danger of the “Big Lie.” In “What the Leo Frank Case Tells Us about the Dangers of Fake News,” she explained how rumor and innuendo in the right atmosphere can lead to hate-crimes like the 1913 lynching of an innocent Jewish factory owner in Atlanta for the murder of a 13-year-old girl.

Frank was Jewish, but his story mirrors countless lynchings of African-Americans in U.S. history. A black man “looks wrong” at a white woman — or did he whistle at her? No, he raped her. The dangerous lie moves from person to person, growing and adding details, and soon a mob forms and the horrors begin. This is not a Nazi story or a German story, but it is one of the oldest American stories.

It is clear Trump is a natural at inciting mobs — as Katy Tur discovered, but Louisvillians have known since Trump’s rally here last May. The event was well underway when protesters in the crowd held up anti-Trump signs. “Get ‘em out of here!” Trump yelled to the crowd, which reportedly responded by physically attacking the protesters. Avowed white supremacist Matthew Heimbach was ready to oblige, allegedly assaulting UofL student Kashiya Nwanguaga and shoving her out of the rally.

Other more ordinary supporters, including a Korean War veteran, were swept up and joined the tumult. Civil rights attorney Dan Canon later filed a lawsuit claiming Trump’s actions were responsible. The case has survived summary dismissal of Canon’s argument that Trump incited the crowd to violence — and incitement is not an easy claim to sustain in court.

This shows that the most immediate danger of Trump’s universe of alternative facts is that it creates a rich environment for the rumor and the mob-raising lie. The wave of 1,863 bias incidents and hate crimes documented by Southern Poverty Law Center between the 2016 election and the end of March 2017 are testament.

Moreover, it is clear that other politicians have borrowed the Trump alt-facts template.

Some, including Bevin, are as flawed as is Trump. The real threat is that a self-disciplined nationalist politician will arise who is more inclined toward the totalitarian state than Trump and Bannon. Then, Godwin’s Law might go the way of the doctrine that the sun revolved around the Earth. Or is Copernican astronomy “fake news” now? I forget. •

Kurt Metzmeier is the associate law librarian at the UofL Brandeis School of Law. He is the author of “Writing the Legal Record: Law Reporters in Nineteenth-Century Kentucky” (University Press of Kentucky, 2016).