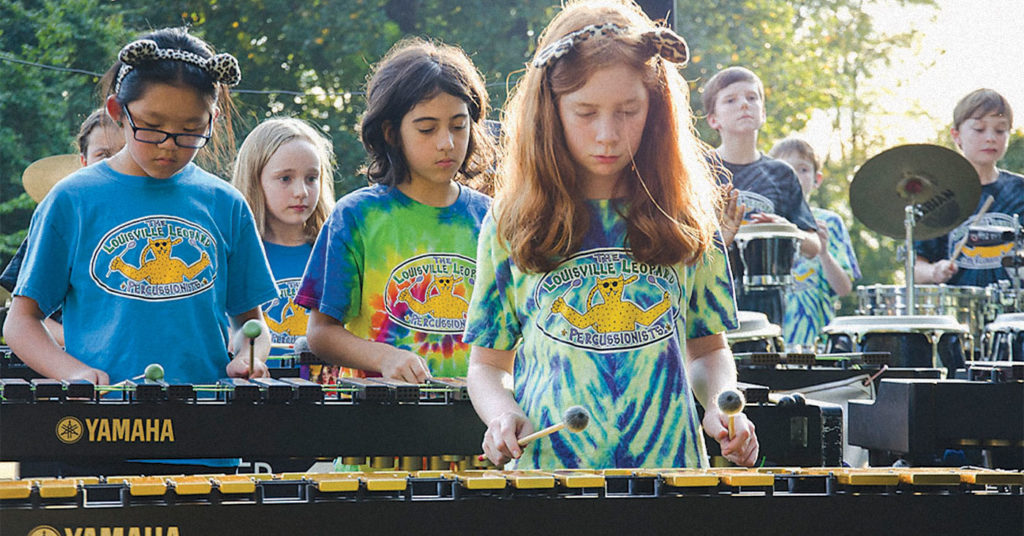 When you go to Poorcastle this weekend to see 36 local bands, know you will also be helping a kid learn to play percussion with the vaunted Louisville Leopards.

The nonprofit, three-day festival sends its proceeds to the Leopards and four other local groups, the Musicians Emergency Relief Fund, Crescent Hill Radio, AMPed and the Greg Bryant Foundation.

All of them are important parts of the local music community.

“Having the support of such a great group like Poorcastle is an honor really, that they see what we’re doing, and think enough of it to want to help us,” said Diane Downs, founder and artistic director of the Louisville Leopards, a percussion ensemble for children.

Donations from Poorcastle help kids join regardless of their ability to pay. “Our tuition for the performing group is on a sliding scale,” Downs said. “We don’t want to put anyone out because they can’t pay for it.

Operating by the good graces of a robust volunteer base that is dedicated to local music, Poorcastle is not only a place to catch some of the best current bands in the city, but it also impacts the next generation as well.

“It’s a labor of love, so that we may donate as much as possible to our benefiting organizations,” said Shaina Wagner, cofounder of Poorcastle, which is held at Apocalypse Brew Works from July 7-9. “It’s important to us to donate to nonprofits that are vital in our music community, from an all-local radio station, to developing our youth’s creativity through music.”

Elaine Hertweck of Musicians Emergency Relief Fund said Poorcastle donations are vital to her organization, which was founded 1983 to help struggling artists during tough times.

“I’ve never met a group of people who would be so humble and more willing to give to others than a group of musicians,” Hartweck said.

After an unexpected death of a local musician a few years ago, the folks at Poorcastle made a special donation to help the family out, and they’ve given to MERF every year since. “They touch the whole community with who they donate to,” Hertweck said. “It’s put to good use. Without people like them, we just wouldn’t exist. We depend on donations to keep us going, and Poorcastle is one of our biggest donors every year.

With 36 bands, a lot of acts are volunteering their time, since it’s an unpaid gig for everyone.

“I would love to one day have enough income through sponsorship to be able to pay our bands and have it be an amount that would even make a difference,” Wagner said. “The latter part is the biggest challenge considering the number of bands that participate each year.”

The response has been remarkable. There is serious heart behind Poorcastle and that shows in the variety and breadth of acts performing, from hip-hop to indie and everything in between.

For William Benton, better known as Cat Casual, the decision to play this year was simple.

“The organizers are clearly passionate about Louisville music and that is reflected in an exciting, eclectic lineup,” Benton said. “They choose excellent organizations to donate to and a potential clincher for me is that it is a festival that provides an actual good time for artists.”

Emcee Phoresceniz, a Poorcastle veteran, said the atmosphere is special: “I really dig its organic and local vibe, musically, and with the different vendors I met last year. This was complemented by the fact its proceeds are donated to several local causes.”

In an age when people are asked to work for free too often, Poorcastle is an outlier because it’s not only a fun yearly event, but also essentially a charity drive. Through organizations like Poorcastle, the scene only gets stronger, something that’s beneficial to everyone.

“I understand why it would be a concern to musicians considering the time and effort put into their performance,” Wagner said. “We have yet to have any musicians not willing to participate due to the inability to compensate them. The benefiting organizations are integral in our music scene, and I think musicians are just as enthusiastic about supporting them as we are.”