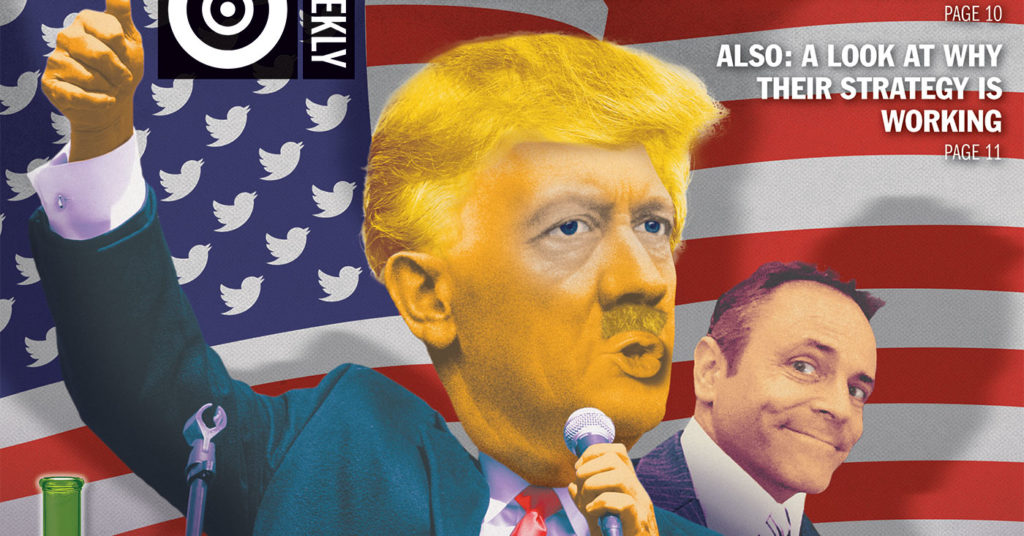 The cover that did not run

We are certain you read last week’s LEO cover story “Trump, Bevin and The Media: Goebbeled or Garbled?” That piece found comparisons — and lack thereof — of President Trump’s and Gov. Matt Bevin’s media strategies to those of Hitler and his minister of propaganda.

What you do not know is that the cover we planned to illustrate the story ended up in the trash can, but not before sparking an interesting debate around LEO’s office about what is appropriately provocative and what is taboo.

In particular, when, if ever, it is appropriate to make comparisons to Hitler.

We ended up going with the non-Führer cover.

Here is an inside look at our decision-making deliberations. We expect some of you to agree and others to disagree, but at least you will see we’re not just throwing shit against the wall to see what sticks… usually.

The goal of any cover is to attract readers. Even better is when the cover draws readers to the feature story or to a particular story in that issue.

In this case, the Big Idea was to mash up Trump and Hitler graphically, but in a subtle way to reflect the nuances of the story. Some of us felt the resulting image is clearly too Hitler-esque. Some of us, including some who are Jewish, thought the cover does not compare Trump to Hitler in a clichéd, lazy way, but instead best illustrates an erudite story that needed to be told. Initially, the illustration looks like Trump, but on closer inspection, Hitler shows through. The resulting image, with the headline “Goebbels or Garbled” and other visual cues, such as the Twitter flag, combine to send the message that there is a deeper argument being made.

But, then, we ran up against modern society’s Rule No. 1: You never compare someone or a situation to Hitler (or the Nazis). For example, “That is like what the Nazis did …”

No, it really isn’t.

We also had to consider that Hitler has never been on the cover of LEO, and, despite the unprecedented political times in which we find ourselves, that wasn’t a streak we wanted to end. While this instance would have been understandable — an image depicting the essence of the issue’s feature story — we would have set a precedent, in which it is acceptable in certain circumstances to make Hitler comparisons.

And, next, there is no avoiding the fact that the image is a political cartoon — a caricature. Kurt Metzmeier’s story is serious, but the image is satire. To satirize the story would undermine its credibility as a scholarly analysis.

Especially in today’s age of the internet, content and context become separated easily and often. Our intent for the cover would be lost as soon as it was posted and removed from the story.

Any controversy over the cover could have overshadowed the story. We could have explained why we used that image and felt justified in our defense, but that is not the discussion we wanted to have. We would rather readers’ interest be in the substance of the story. Creating a cover always involves reaching a balance: It is meant to draw readers into the story… but if it goes too far, it becomes a distraction.

In the future, we undoubtedly will find ourselves in the midst of a controversy. It may be because of a controversial story or something completely external… like a social-issue battle. We may misstep, or overstep, on an issue of race, religion or whatever. Whenever that time comes, we would have less currency to argue for, or defend, our decisions if people know us only as the people who did a Trump-Hitler cartoon.

Wading into the waters of Hitler and Nazis does nothing but weaken our footing when it comes time to fight real battles.

That brings us, finally, to journalism’s Rule No. 1: When it doubt leave it out.

So we did that…

As someone who has written and edited, I readily accept that most editorial decisions are just that, decisions, and not epic, free speech clashes. My eyes are incapable of not rolling when I hear someone who has never been on an editorial staff make those contentions. People have different opinions and the final decision was well beyond my freelancer’s remit. That said, I liked the unchosen cover. While it appears to answer the question the title to my piece asks, using that cover would allow me to deliver a Shyamalanian twist inside. And while as a writer I endeavor to choose my words carefully, political art is never meant to be as subtle as political writing. “Those damned pictures,” as Boss Tweed called the Thomas Nast cartoons that help bring down his corrupt ring, always need to pack a punch.  —Kurt Metzmeier