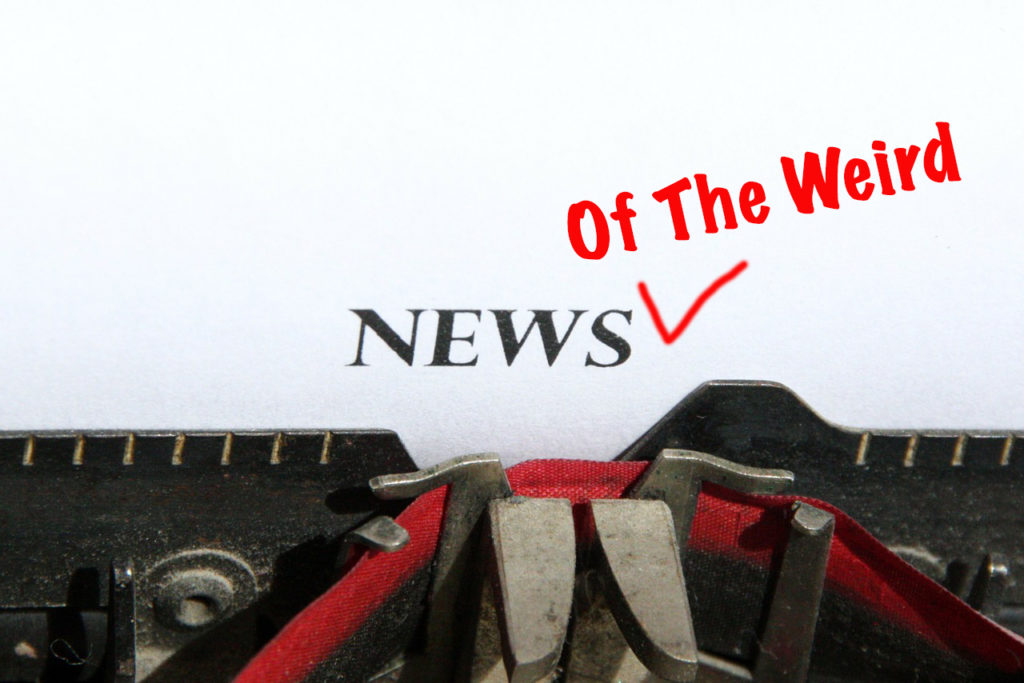 Get to the Pork Chopper!

Tourists and father-son duos looking for out-of-this-world bonding experiences are paying up to $50,000 for the opportunity to “hunt” feral hogs from helicopters in Texas, sometimes using machine guns. “There’s only so many places in the world you can shoot machine guns out of a helicopter and no one shoots back,” said HeliBacon company co-owner Chris Britt. Texas passed the “pork-chopper” bill in 2011 allowing aerial hunting of feral hogs, and in May, legislators approved hunting from hot-air balloons, which are quieter and give hunters a steadier shot.

Enterprising mother Jeannine Isom in Cedar Hills, Utah, took her 7-year-old son’s dental care into her own hands in June when she purchased hand sanitizer and needle-nose pliers at Walmart, then ushered her son into the store’s restroom and pulled out two of his teeth. Police were alerted after the boy’s older brother heard him screaming. The mother was charged with felony child abuse.

A frustrated victim of bedbugs in Augusta, Maine, reacted to city inaction by bringing a cup of bedbugs to a municipal office building and slamming it down on the counter, scattering about 100 insects and forcing the closure of several offices as officials scrambled to contain them. The apartment dweller had requested help finding other housing, but city officials told him he didn’t qualify.

Things We Didn’t Know We Needed

Are cute vegetables easier to swallow? A Chinese company has developed fruit and vegetable molds that form growing foods into little Buddhas, hearts, stars and skulls. Farmers afix the plastic molds over the stems of growing plants, and the fruit fills the mold as it grows. Some designs include words, and the company also offers custom molds.

French fashion label Y/Project, in an apparent response to the eternal question, “Do these jeans make my butt look big?” is selling buttless jeans. The waistband attaches to the legs of the jeans with a series of clasps and straps, so the pant legs hang loose on the wearer. The Detachable Button Down pants are priced at $570.

College student Lydia Marie Cormaney almost made it out of a Gillette, Wyoming, Walmart with more than $2,000 worth of merchandise without paying for it. When police arrived, she was ready with a reason: She was doing research about kleptomania, which also explained the stockpile of stolen items in her dorm room. However, as she was enrolled in only a biology class at Gillette College, it was unclear what she planned to do with the results of her study.

(1) The Happiest Place on Earth was a little less joyful for 17 visitors in June, when a hazardous materials team was dispatched to Main Street at Disneyland after park-goers reported being struck by feces. Experts quickly realized that rather than being victims of a bathroom bomber, the park guests had been regrettably positioned beneath a flock of geese flying overhead. The victims were ushered to a private restroom to clean up and were provided with fresh clothing. (2) Maintenance workers at the courthouse in Jonesboro, Arkansas, are fed up with people urinating in the elevators, especially considering that restrooms are within spitting distance of the elevators. Craighead County officials hope to stem the tide with newly installed security cameras, which have caught three men in the act since their installation last fall.

Robert Dreyer, celebrating his 89th birthday, suffered no apparent injury when he crashed his car into a fire hydrant in Viera, Florida, in May. But as he got out of the car to check the damage, he drowned after being sucked into the hole by the strong water pressure where the hydrant had been. A bystander tried to rescue Dreyer, but couldn’t overcome the water pressure to reach him.

People and Their Money

(1) Because leaving your falcon at home while you do errands is too painful, high-end automaker Bentley now offers a customized SUV featuring a “removable transportation perch and tether” for hunting birds and a wood inlay in the shape of a falcon on the dash. At a starting price of $230,000, the Bentayga Falconry also features a refreshment case and special compartments for bird hoods and gauntlets. “Falconry is regarded as the sport of kings in the Middle East, so it was vital that the kit we create … appeal to our valued customers there and around the world,” noted Geoff Dowding with Bentley’s Mulliner division. (2) A stretch limo wasn’t posh enough for Saudia Shuler, a Philadelphia mom who wanted to make her son’s high school prom memorable. Instead, she spent $25,000 creating a Dubai-themed prom night, including 3 tons of sand and a camel (for pre-prom photos). The lucky senior took not one but three dates to the dance, who along with him wore designer clothes and accessories. Shuler also sprang for a rented Lamborghini, Rolls-Royce and Range Rover.

(1) Japan’s Samurai Age store, which (naturally) offers novelty samurai apparel, is featuring a new line of samurai armor outfits for cats and dogs. The body armor is sized for small pets, but custom orders for larger sizes are possible, and can include a helmet and mask. (Samurai enthusiasts can also order armor for liquor bottles and dolls.) (2) Suspicions were aroused in New Hope, Alabama, when veteran mail carrier Susanna Burhans, 47, was seen throwing food at a dog along her route. On June 1, she was charged with aggravated animal cruelty after the dog’s owner found a nail-filled meatball near his house, and a subsequent X-ray revealed nails in its stomach. The USPS has put the mail carrier on non-duty status. (3) Thailand’s Scorpion Queen, who holds the Guinness World Record for holding a scorpion in her mouth (3 minutes and 28 seconds), shocked onlookers in June as she let scorpions crawl all over her body and in and out of her mouth as part of a show in Pattaya, a city on the Gulf of Thailand. Kanchana Kaetkaew also holds the record for co-habiting with 5,000 scorpions in a 12-meter-square glass enclosure for 33 days.

The Zoological Wildlife Conservation Center in Rainier, Oregon, is offering sleepovers in its sloth sanctuary. The visit includes a tent with a cot and satellite TV (in case the animals are being too sloth-like). Visitors, who pay $600 (double occupancy) for the 12-hour experience, are asked to whisper so as not to stress out the sloths.

French performance artist Abraham Poincheval managed to hatch nine chicken eggs in April by incubating them himself for three weeks inside a glass vivarium at Paris’ Palais de Tokyo contemporary art museum. Poincheval’s past projects have included sitting inside a block of stone for a week and living in a hollowed-out bear sculpture for two weeks.

Baggy blue jeans were the ill-fated getaway vehicle for 15 quart-size bottles of Pennzoil motor oil and 30 DVDs of “Treasure Hunt” in a badly planned theft in Lakeland, Florida, in June. William Jason Hall, 38, stuffed the loot into his pants inside a 7-Eleven store without realizing that a detective in an unmarked police car outside was watching him. Because it was his third arrest on petty theft, he was charged with a felony.

Male baseball fans attending the June 15 Jacksonville (Florida) Jumbo Shrimp minor league game were treated to a novel promotional giveaway: pregnancy tests. The “You Might Be a Father” promotion was conceived to help fans decide whether they should return for the Father’s Day game on Sunday, June 18.