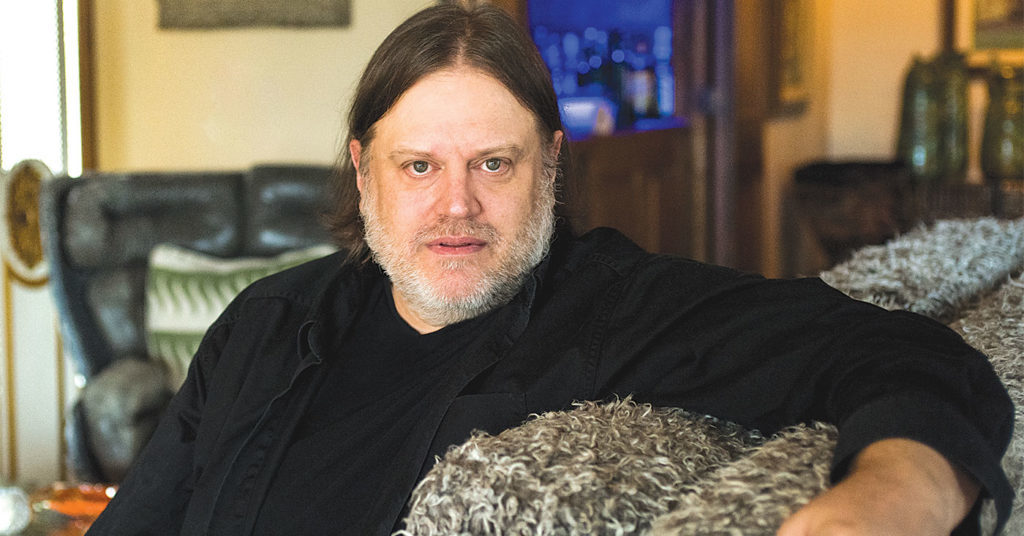 In June, Matthew Sweet released Tomorrow Forever, his first solo album since 2011’s Modern Art. Funded through Kickstarter, Tomorrow Forever took longer to release than expected, in part because he recorded more than twice the amount of tracks that made it onto the 17-song album. The extra material won’t be lost forever, though — instead the demos will be sent to his Kickstarter supporters, who made Sweet’s first crowd-financed album a success.

“It caused me a little bit of stress, because it was taking so long,” Sweet said. “I wanted to make sure it was a really great record. I recorded multiple batches. I feel like I’ve at least covered that end of it. I don’t know if I’d do it again the same way.”

Tomorrow Forever is also the first album Sweet recorded at Black Squirrel Submarine, his Omaha studio. But just like on all of his records, Sweet played bass, guitar and keyboards on all the tracks.

Longtime Sweet collaborators drummer Ric Menck and guitarist Paul Chastain were in Nebraska to record, as was the Bangles’ Debbi Peterson. Guitarist John Moreman spent a week in Omaha, and then recorded additional parts in San Francisco. Valentine McCallum did the same with his pedal steel, working in Los Angeles. Jason Victor, who will also be part of Sweet’s touring band, also added his guitar outside Sweet’s studio.

“I’d send a track with bass, drums, guitar and singing and tell them to do what they wanted,” Sweet said. “It’s like Christmas when you receive them from the other person. You don’t know what you’re going to get. But I have to say it’s always great. There must be something to letting people do what they want to do.”

Then, there was Rod Argent, keyboardist for the legendary ‘60s band The Zombies, who made the classics “She’s Not There,” “Tell Her No” and “Time of the Season.”

“I did meet him,” Sweet said. “Lisa (Sweet’s wife) and I flew out to Denver to see them play ‘Odessey and Oracle.’ I went backstage to meet them. I somehow stuttered out that I hoped he’d play on my record. He had no idea who I was. But he was open to the idea.

“Eventually, he got an engineer into his house. He had a brand new grand piano he got for his 70th birthday. I’d asked if he’d play harmonium or organ. But he wanted to play that piano. He played on a couple songs, ‘Hello’ and ‘Haunted.’ Lisa and I sat here and listened to how great he was. I was lucky enough to work with Nicky Hopkins years ago and some of the other English piano greats of the ‘70s. He definitely had that magic.”

The entirety of Tomorrow Forever has that magic, instantly becoming a Sweet album in league with his ‘90s greats — Girlfriend, Altered Beast, 100% Fun and Blue Sky on Mars.

It starts with the melodic power-pop gem “Trick,” which is immediately followed by the harmony-drenched, gorgeous ballad “Entangled,” then moving to the psychedelic rocker “Pretty Please,” setting something of a pattern for what is, like all Sweet albums, a very personal recording.

That’s most clear on “You Knew Me,” his loving tribute to his mother, Mary Jane, who passed away in 2014, shortly after Sweet moved back to his home state of Nebraska from Los Angeles.

Other standout tracks on what is a great guitar album include the delicate “Country Girl,” a slinky counterpoint “Off The Farm,” a couple more pop gems — “Nobody Knows” and “Bittersweet” — and the groove-driven “Come Correct.”

Some of those songs will find their way into Sweet’s Louisville show, but only a fraction of them.

“I think we will play three or four songs from it, which for me, is a lot of songs from a new record,” Sweet said.

Sweet can play only a few songs from any album if he wants to survey his career, which began with his 1986 debut Earth. His masterpiece, Girlfriend, came out five years later.

“People remind me: ‘Do you know how long you’ve been doing this?’” Sweet said. “It’s weird, I don’t feel that different. I don’t feel super old. I think that shows in the music. It helped me, moving back [to Nebraska]. It helped me feel the way I did when I was just starting out, messing around on an acoustic guitar and singing into a four-track recorder, so no one would hear me. I feel like I’ve come a long way. Now playing live is natural to me and it’s something I like to do. So is writing songs and recording. But I think, in a way, we all stay kids inside.”