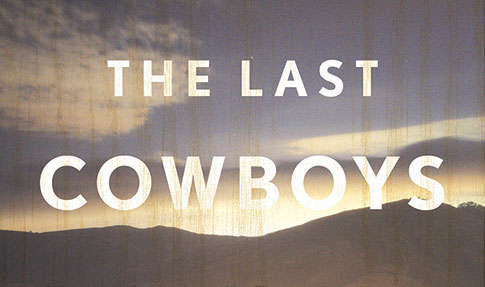 Do you want a book about how a hopeless pursuit in the modern American West tests the best and worst in the pursued party?

You don’t need to go back to Harry W. Lawton’s 1960 book, “Tell Them Willie Boy Is Here” — there have been plenty since then, with as many or as few idiosyncrasies as you could ask for. Looking for great tales of brotherly conflict? No end to ‘em. Just break open your family Bible and there’s a keeper. If you’d like something a bit less formal, pick up George Steinbeck’s 1952 “East of Eden.”

Now, how about combining these two storytelling traditions? It’s been done before, too.

But this has rarely been done as well as in “The Last Cowboys of San Geronimo,” the first novel by UofL creative writing teacher Ian Stansel.

Exactly how he has developed such a rich reading experience is worth considering. After all, this book doesn’t go far past novella length. And it’s managing to squeeze in enough precise geographic referencing to let you produce a pretty good map of Marin County, California.

So what is there room for? Character delineation and narrative choices that are practically flawless. The pursuer in the novel’s big chase is a middle-aged woman who keeps her confidence and her doubts near the surface. She has also been the referee — and alternately buffer and accelerant — in a decades-long familial conflict that explodes right at page one. Her husband, Frank Van Loy, is dead. Frank has been killed by his brother Silas, who has mounted a horse and begun a quixotic getaway into national forests, fenced meadows and the vicinity of the Pacific Coast Highway.

The woman grabs a gun, mounts her horse and gives chase. But the novel’s truly made in the flashback chapters and sections that delve into the brothers’ past.

Full disclosure: Like Silas, I have an older brother who’s ambitious, keeps some of his cards hidden and takes unilateral control of communal resources. My hard-learned reaction is to accept a peripheral role with accomplishments made through intuition and so-called soft skills. Only at my best can I leave behind a sense of unfairness.

Stansel’s brothers function in the exact same manner — uncannily so. The author ingeniously works the fraternal contrast while guiding readers through an often symbiotic pair of courses through life — and toward a shared tragedy. The alpha brother’s entrepreneurial spirit and his manipulation of those around him (including the wife who’ll seek to avenge him) are trimmed just enough so we know something of Frank Van Loy’s heart. The clipped, passive-aggressive commands in his dialogue reinforce the role he’s chosen. The younger brother, meanwhile, charms horses and lady riders and is more obviously self-destructive — and so the author gives Silas more word-count, reflecting and reinforcing his side of the brotherly pas de deux.

Yet the brothers are very similar — West Coast ranchers who adapted to become teachers of the more-fussy (and more profitable) style of English riding, while keeping their Stetsons close by. They fight ferociously while pouring each other’s drinks. They eventually learn to live at a surly distance — but something is going to bring them back in each other’s orbit and guns will go off.

The author’s style is sparse, though hardly Hemingway-esque. Stansel’s economical language seems less effective when in the elite horse-riding world the brothers invade and conquer. Some terms and descriptions stick out without seeming to find a comfortable place in the narrative. But then, the memorable characters don’t get to feel they’ve won a comfortable place they can keep — try as they might. •