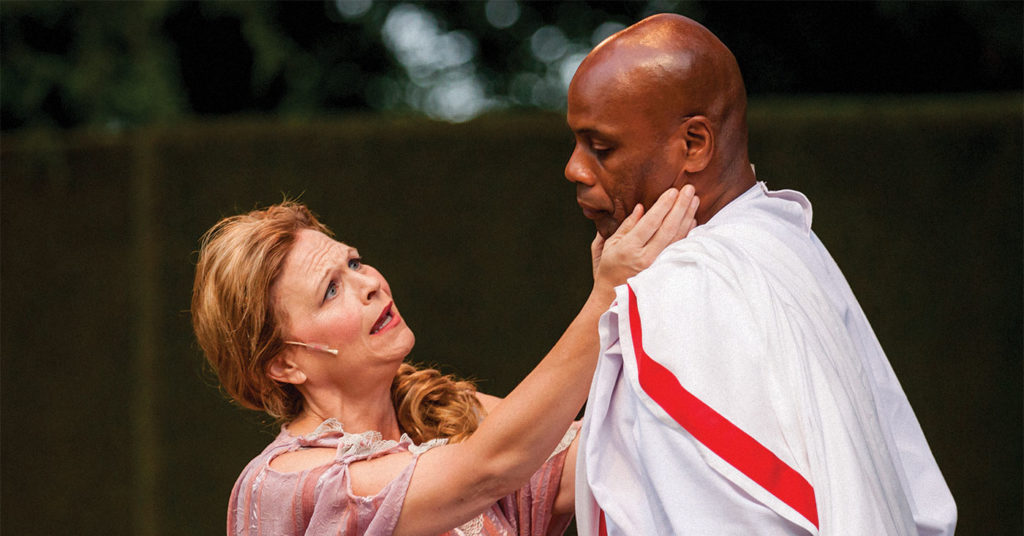 At the end of Shakespeare’s “Julius Caesar,” the Roman Republic is in ruins. The brutal civil war precipitated by Caesar’s assassination has devastated the country. An entire generation of elite leaders — the Senators who conspired against Caesar — are dead, slain in combat (fight choreography by Eric Frantz), or by their own hands.

In the play’s final scene, Marc Antony, the leader of the Caesar loyalists, surveys the desolation. Standing over the body of Brutus — a dear friend of Caesar’s before he joined the assassins — Antony offers up a compelling interpretation of what has gone before. All the other conspirators, he says, attacked Caesar out of envy. Brutus alone was motivated by honorable, patriotic concerns. And so, although Brutus was a traitor, Brutus deserves an honorable burial.

Earlier, of course, Antony has spoken over another body, that of the slain Caesar. That earlier eulogy opens the famous words, “Friends, Romans, countrymen, lend me your ears; I come not to praise Caesar, but to bury him.”

In his eulogy, Antony mentions Brutus more often than he mentions Caesar. In remarks drenched in bitter ironies, he repeatedly tells the people of Rome that “Brutus is an honorable man.” And by the time he’s finished burying Caesar, he has unleashed a bloody revolution.

These are familiar scenes in a familiar play. They give the play a symmetry and balance that rings with authority — especially because the healing nature of Antony’s closing remarks seem to have a noble, redemptive quality about them. Antony is the last man standing, after all — and doesn’t that make him a hero who gets to tell us what everything means?

That, at least, is what I’ve taken away from my previous viewings and readings of “Caesar.” But as with the earlier plays on the bill at this Kentucky Shakespeare Festival in Central Park, this “Caesar” offers some new revelations.

You may recall that a few years ago, Ira Glass of “This American Life” memorably tweeted to the effect that Shakespeare sucks because his works are “not relatable.

Sometimes — as with the controversial “Trump-Caesar” production this summer at New York’s Central Park — theater companies employ devices such as contemporary settings to address the relatability problem.

There is nothing novel about KY Shakes’ approach to this “Caesar,” but Director Matt Wallace’s cast animates every character in the play with a sharp sense of purpose. It’s a remarkably democratic production in which it seems every character — the lowly plebeian laborers (Crystian Wiltshire and Shaleen Cholera), the wild-eyed Soothsayer (Neill Robertson) and the pleading Artemidora (Elisha Espinosa) — has a hand in shaping the fate of Rome.

I think the relatability of this summer’s productions is rooted in a simple fact: This cohort of actors is so steeped in Shakespeare’s language and rhetoric, and so familiar and confident in one another’s work, that it can focus on bringing these characters to life.

And they are quite an assortment of characters (note that most of the performers play multiple roles, not all of which are mentioned).

Tom Luce is as happy a Caesar as you can imagine. He conveys a charismatic generosity of spirit that makes it easy to understand why he is beloved by the people of Rome. But basking in the adulation of the plebeians isn’t enough for Caesar, and Luce is equally adept at showing the blithe arrogance Caesar displays among his Senatorial peers. Of course, it is that arrogance that will bring him down — and the character most troubled by it is his wife Calphurnia, played marvelously by Abigail Maupin. In her public scenes with Caesar, Maupin’s Calphurnia displays a glowing haughty carriage (emphasized by the artful work of costume designer Donna Lawrence-Downs, whose apparel throughout the summer season has been extraordinary). In her private scenes with Caesar, we see Calphurnia as the distraught — but still strategic — wife striving mightily to protect her husband from his looming fate.

The sound design by Laura Ellis is an important element in building the dramatic impact of this production, and it’s against the backdrop of distant crowd noise (coming from what we today would call a Caesar rally) that we see the conspiracy of assassins coming together. Other technical aspects make strong contributions: Paul Owens’ set, Barb Cullen’s choreography and Casey Clark’s foreboding lighting.

These toga-clad anti-Caesar conspirators are a finely differentiated lot. The orchestrator, Cassius (Brian Hinds), is a master of personal politics and face-to-face persuasion, and Hinds gives a crafty performance that balances his personal animus toward Caesar against what seems an equally authentic drive to protect Rome from a perceived threat. Cassius’ interplay with the other conspirators, Caska (Gregory Maupin), Decius (J. Barret Cooper), Trebonius (James Stringer Jr.), Metellus (Crystian Wiltshire), Cinna (Jon Huffman) and Ligarius (Jon Becraft) is fascinating. And Hinds and Maupin are marvelous in an early scene where Cassius develops a version of his case against Caesar.

But the key relationship is between Cassius and Brutus (Dathan Hooper), whose participation will give the plot an aura of moral credibility. In a strong performance, Hooper plays Brutus as a brooding stoic whose simmering emotions are mostly under control — until they’re not. If Brutus is a traditional Roman, his wife Portia is decidedly not. Shakespeare’s Portia is one of is most remarkable characters, and Jennifer Pennington plays both her anger and her love. (As Lucius, Brutus’s loyal servant, Chloe Bell adds a special note of urgency).

And then, of course, there is Antony, one of Shakespeare’s most eloquent characters. He’s played here with grace and power by Jon Patrick O’Brien. O’Brien is a great and perplexing Antony. Whether he’s inciting a mob or trying to stop a war, he infuses the character with a fierce conviction. But does that make Antony an honorable man? •