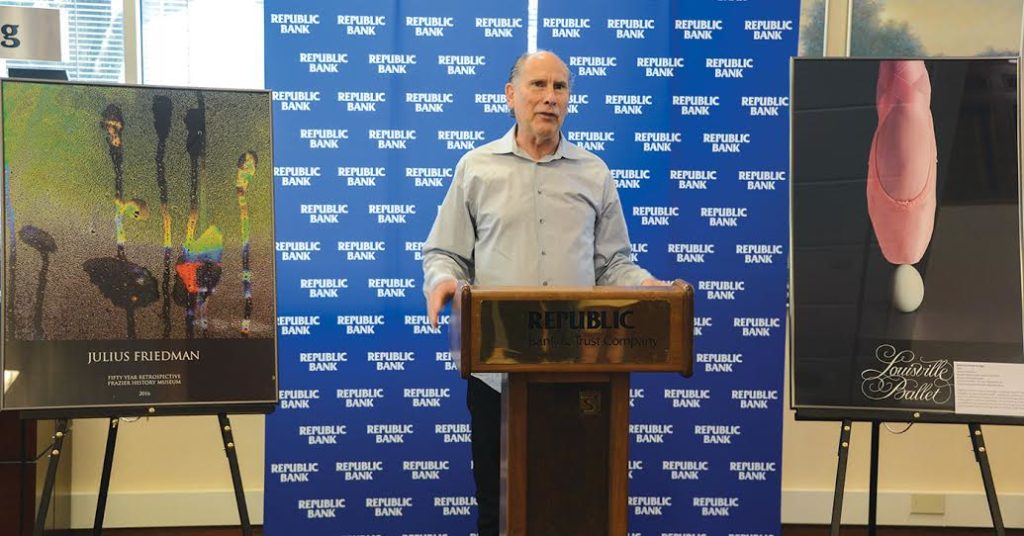 One of our local art greats is gone. Designer/photographer Julius Friedman, 74, has died from leukemia. I always thought of Friedman as a lovely curmudgeon, a man who could smile while scowling. He didn’t sugarcoat Louisville, stating it wasn’t an easy place to be an artist or to sell it. But he was passionate about our visual art community. Highlights of his creative life include his design studio Images, owning the Chapman Friedman Gallery with his wife, painter Cheryl Chapman, and receiving theKentucky Governor’s Award in the Arts in 2004. Friedman’s work is in New York City’s Museum of Modern Art and the National Gallery of Art is Washington, D.C. as well as in the National Museum of Poster Art in Warsaw, Poland and the Dansk Plakamuseum in Aarhous, Denmark. The Frazier History Museum exhibited a retrospective last year of his work. It featured more than 200 posters, such as his best known iconic works, the ballet toe shoe atop an egg he did for the Louisville Ballet, and “Fresh Paint,” a testimony on tempera paint, created for the Kentucky Arts Commission. “Images & Ideas,” a retrospective in book form, was published in 2008.

My favorite memory of him is not work related but personal. My sister wanted to buy a copy of “Fresh Paint,” so I took her to his gallery. He was gracious to her, selling it for a lower rate, telling her “you’re art family,” and signing it with flourish. She still smiles when she talks about the encounter. I saw Frazier Director Penny Peavler on Saturday and, of course, we talked about him. There will be a lot of that in the next couple of weeks. Salute, Julius.