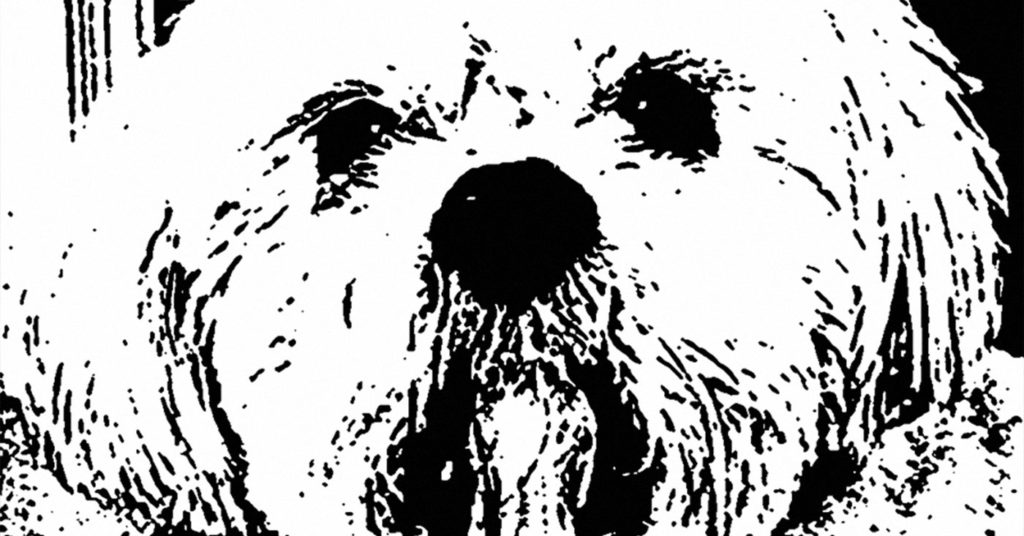 [Ed. note: This is a special guest column by The Taste Bud’s dog, Darby]

Hi, my name’s Darby, and The Taste Bud guy is my dad. I requested to do the column this week because I found a new food I really like. I mean, a lot.

You see, I’m 13 now, which is pretty old for a Lhasa apso (I’ve heard Dad call me that, so I guess it’s true), and I have to say that 11 years of Natural Balance food is about enough. Oh, sure, I’ll still eat it, but even a dog likes a little variety, you know?

Dad says it’s healthful for me, but it’s kind of like eating soft rocks. Hey, I’m a dog — I’m related to the wolf, and what we really want is meat. Juicy, tender, bloody meat. Of course, I’m not much of a hunter these days. When I was found 11-plus years ago, I was wandering the back roads near Chattanooga, Tennessee, and eating a lot of garbage. It was a tough time, but some kind people from a rescue league took me in. I ended up moving in with The Taste Bud guy after they cured my heartworms.

And that’s when the Natural Balance started. Along the way, he would occasionally give me things such as chicken gizzards and chicken hearts. Talk about some good eating. Boy, oh boy, I loved those days.

He also poaches an egg for me sometimes, which is one of my favorite breakfast treats. He usually eats Cheerios with blueberries, but I’m not all that into the little round oats. To each his own, I guess.

Once, The Taste Bud guy even gave me a whole deer heart. OK, well, he boiled it, sliced it and gave me a slice a day for, like, a week. But that may have been the best series of meals I ever had, and I’m not even kidding. Dad and his girlfriend joke that I probably have the spirit of the deer inside me since I ate that thing.

Oh, sure, whenever he has steak, he gives me a bite. Same with chicken, fish or pretty much any meat he eats while I stare at him, silently willing him to finally split something with me 50-50 (it never happens). Still, I generally have it pretty good.

The catch is that I don’t like to take medicine.

On the rare occasions over the years when I would get sick, he’d try to get me to eat pills by wrapping them in cheese. He could usually fool me once, but I learned how to eat around the pills, and then spit them out when he wasn’t looking. (Dad’s a good guy, but he’s not always the sharpest tool in the shed, if you know what I mean.)

But now things are different. I’m still getting the Natural Balance, which is good for me, but The Taste Bud guy says now that I’m in my “twilight years” (whatever that means), he’s going to let me have more of what I want, and his girlfriend stumbled upon a food called Cesar Classics. Her dog didn’t like it, so she gave it to me, and my life changed.

The “filet mignon” flavor is my favorite by far (the roast beef flavor has peas and carrots in it, and I’m not into that), and it’s packed in “meaty juices.” Meaty juices. That’s what I’m talking about, folks. Now, I can’t swear there’s actual meat in the stuff, but as soon as he puts it in my bowl, I attack it. It’s so soft and juicy and tasty, that I can’t help myself.

It’s no deer heart, and I don’t mean to imply it’s as good as actual steak, but if getting to my twilight years means getting this stuff on the regular, then I’m not going to complain about my arthritis, cataracts and bad hearing.

Dad even tasted the Cesar Classics, but he found it to be kind of gritty and “weirdly acidic” (his words, not mine). You know what that means? That’s right: more for me. He can have his Cheerios. I’m going to ride this meaty train right into the station. The station, you know, being my mouth. Eh, if I have to explain it, then you’ll never get it anyway. Anyway, I’m out. In two weeks, The Taste Bud guy will return. Meanwhile, I’ll be eating Cesar Classics.