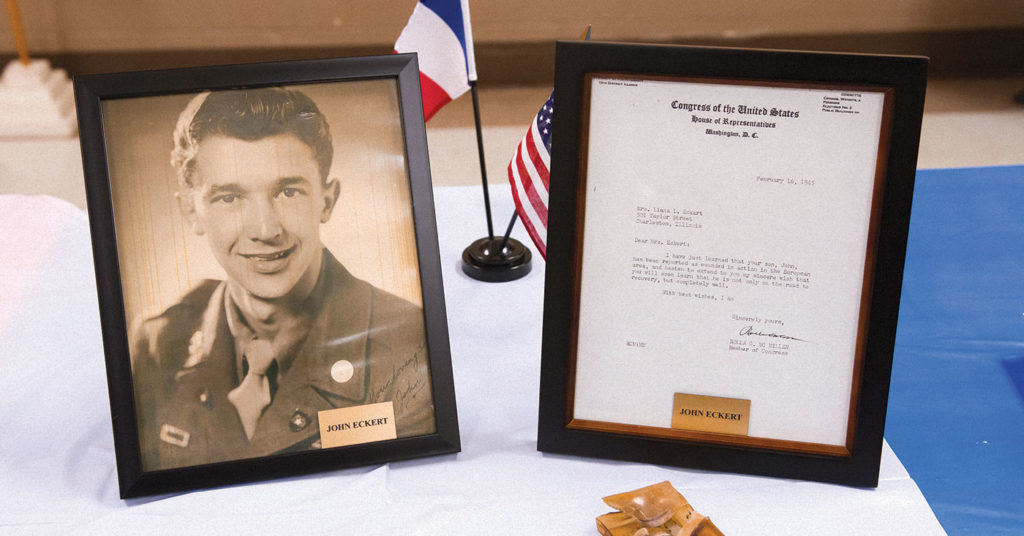 On a table covered in white cloth sat two frames and two flags, that of the United States and the other of France, and the mangled, Bakelite cigarette case that had saved his life.

In one of the frames, a photo of a young John Eckert with an inscription to his mother, “Your loving son, John.” His slim face peers out with a nervous smile, deep uncertain eyes, and a fresh undercut — a lock of his dark hair falling near his forehead. He’s suited in his Army uniform, looking more movie star than military — like a young Ron Reagan. Unlike Reagan, who made propaganda and training films as a soldier, Eckert would see the battlefields of World War II firsthand and be shaped by his experience there.

In the second frame is the February 1945 letter sent to Eckert’s mother telling her that her son injured but recovering.

“I was wounded by a German 88 shell that came down. I didn’t get down soon enough. I had shrapnel in my right shoulder, my neck and it blew a hole in my helmet,” he said. The cigarette case he’d tucked inside his helmet caught the shrapnel, saving Eckert’s life.

Now 91, he eventually would receive a Bronze Star and a Purple Heart for his service. The Louisville resident is still confused by what he did to deserve those honors.

“I’m just a plain ole rifleman,” he said, explaining that he finds it hard to accept the honors for himself when many of his brothers-in-arms did not return home. “I don’t understand what the big deal is. We were all of part of a military operation. How many millions of us were over there.”

When asked about the difference in military service between World War II and now, Eckert is, at first, reticent. “It’s a totally different time and totally different situation — world conditions — and we have a president who’s an idiot. Quote me on that,” Eckert said, adding: “I don’t have a reaction to the military today. They’re doing what they have to do.”

Eckert’s humility and quiet honor is markedly different from the hero-worship of today’s military. An issue that, in my opinion, adds to the stress of returning soldiers who are too often dealing with major trauma and also finding the idea of being a “hero” too difficult to accept. Eckert is not unlike these young men. He grew up in a world where service was essential. He went to war, was nearly killed and upon returning home, it wasn’t praise he was seeking. He just wanted out. “The military was not my cup of tea.”

But he did not know that at first.

He enlisted and was 18 when he went to basic training. “It was a world war, and we were defending something. Everybody tried to get in. Everybody was enlisting,” he remembered.

“I ended up in the Army Specialized Training Program, and when they needed troops for the invasion of Europe, they eliminated that program and sent us all to units that were being formed to provide manpower for the invasion,” Eckert said.

In late 1944, Eckert walked onto his first battlefield. It was a divergence from his small hometown of Danville, Illinois. Eckert’s earliest recollection of the battlefield was jumping into the first foxhole he saw. Inside was the body of a German soldier. Eckert immediately hopped out. A memory he says he will never forget.

In mid-December 1944 during the Siege of Bastogne, Eckert was severely wounded by the shell. He was only 18 days past his 19th birthday. Bleeding heavily and unconscious, his fellow soldiers did not know he was alive and left him behind. “They gave me up for dead because when you’re hit in the head, you bleed a lot. I woke up in the evening. It was dark, and I had obviously been knocked out.”

Eckert’s next move proved fateful. “I went up to the closest pillbox and fortunately it was ours and not the Germans.”

He spent three months recovering before rejoining the 100th Division to capture the town of Bitche, France. Because these young men fought two battles in the area, they became known as the “Sons of Bitche,” an honorific given by the residents.

When his time was up, Eckert wanted out of the Army. “I hated the military. I hated it with a passion. It was a whole system of obey the order.” he said.

After leaving the military, Eckert went on to marry. He and his wife, Leila, have been married for 68 years and have two children. Eckert worked in, and later purchased (with partners), one of the first radio stations in Danville, Illinois with Danville High School classmate Dick Van Dyke.

And now, some 70 years after Eckert fought in France, he received another honor that he is not sure he deserves.

On June 5, French Consul General Vincent Floreani traveled to Louisville to award Eckert with the French Legion Medal of Honor — the highest French honor and first awarded by Napoleon Bonaparte in 1804. “You have more information than you’ll ever want, don’t you,” he said with a laugh at the end of our talk.

I disagreed and told him that I wished that I had collected more stories from my own grandparents.

What Mr. Eckert has shared is more than his story. He’s given me a piece of history, our shared history. And as the world seems to grow more dangerous and appears closer to war, he’s reminded me that we’ve been here before, on the precipice of military entanglement. His stories give me hope that we will listen to our elders, the people who’ve walked the roads we are tripping along.

His hesitance to accept rewards after the blood of so many was spilled, let’s me know that service with humility is what real honor looks like — a practice we might all try in our own lives.